Fox STAR deal for MY NAME IS KHAN

Shahrukh Khan and Karan Johar strike a major film distribution deal with STAR and Fox Searchlight for MY NAME IS KHAN.

Some media reports claim the deal is worth about Rs. 100 Crore

A major film distribution deal between Hollywood and Bollywood has been agreed. Twentieth Century Fox and STAR have come together, and Fox will finance, market and distribute MY NAME IS KHAN, the Shahrukh Khan film made by director Karan Johar.

SRK and Johar have teamed up with Fox on a major marketing and distribution agreement for their movie. Some media reports claim the deal is worth about Rs. 100 Crore (approx £12 million) but Fox STAR executives declined to comment on the amount. If true, it is likely to be the biggest deal ever for a Bollywood film, outstripping Rs. 90 crore for Ghajini, starring Aamir Khan and Rs. 70 Crore for Om Shanti Om, which also starred Shahrukh.

The film is being co-produced by Karan Johar and Shahrukh Khan with a budget of 55 Crore and is due for release in 2010. The story is about the life of a Muslim man from India, played by Shahrukh Khan, who lives in San Francisco, in the U.S. This man goes on a remarkable journey across the United States, inspiring people and inviting debate, and creating an accidental revolution. 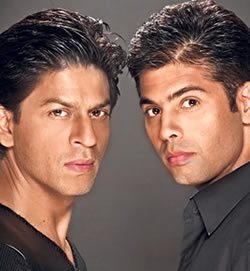 The venture between the two parties for MY NAME IS KHAN, follows the hugely successful release of Slumdog Millionaire in India by Fox STAR Studios.

Fox Searchlight Pictures who marketed and distributed the Academy and Oscar winning Slumdog Millionaire in the United States, will release MY NAME IS KHAN in the U.S and Twentieth Century Fox International will distribute the movie outside of India and the U.S.

“This deal is part of our commitment to do good business in India and align with the best names in the industry,” said Vijay Singh, CEO of Fox Star Studios, at a news conference.

Jim Gianopulos, Chairman and CEO, Fox Filmed Entertainment said, ”We are extremely proud of this collaboration, which reflects our ongoing commitment to partner with the best film makers in the world.”

Karan Johar said of the partnership, ”For us it was important to find a partner, who is like minded, has a similar vision and the capability to take Indian Cinema to International Markets.”

However, a jubilant Shahrukh Khan had other reasons for the venture; smiling, he told reporters, “The only reason to tie up with Fox is because I heard they are related to (Hollywood actress) Megan Fox whom I really like.”

The film reunites Shahruk Khan with the delightful actress, Kajol, who plays his wife in MY NAME IS KHAN. The on-screen chemistry between the two has shared huge success in the past with blockbusters like Kuch Kuch Hota Hai, Dilwale Dulhania Le Jayenge, Kabhi Khushi Kabhi Gham, Baazigar and Karan Arjun.

So far, apparantly, the movie has been receiving rave reviews from the critics who have managed to catch rushes of the movie. Also,critics who managed to hear some of music from the movie composed by trio Shankar-Ehsaan-Loy were overwhelmed and consider the album to be potential chartbuster.

The teaming of Karan Johar and SRK will no doubt bring some magic to the Bollywood screen and as for the agreement with Fox Star, there are no doubts that it will open the doors for major future ties between Hollywood and Bollywood.

Amit enjoys creative challenges and uses writing as a tool for revelation. He has major interest in news, current affairs, trends and cinema. He likes the quote: "Nothing in fine print is ever good news."
Love Aaj Kal censored by Sikh board
Yash Chopra is top Asian Filmmaker