Milind Soman revealed that he works out every day for just 15 minutes. He explained what he does to stay in shape as well as his diet.

"I have never been to the gym as a routine to work out."

Milind Soman is often regarded as one of the fittest people in the entertainment industry but he admitted that he is rather lazy, working out for just 15 minutes every day.

It is part of his ‘Fight Lazy’ movement where he urges people to push themselves to be their fittest versions.

Speaking about the movement, Milind admitted that he is lazy.

He said: “Everybody has this thing about laziness.

“Life is very tough, you never know what’s gonna happen tomorrow. You have to be prepared for it. So if I want to deal with those things easily, I need to be fit mentally and physically.

“The first step is to fight this part of us that makes the excuses. Like ‘I don’t like to wake up early’, which is my excuse. I hate waking up early.

“When I run, I run at 10 o’clock in the morning. The biggest thing that the pandemic taught us, is that people with underlying health issues are more at risk. So you’ve to start taking care of your health, not only physically but also mentally.

“And when you do that, the first thing you have to do is stop making excuses.”

He went on to say that his workout regime is not extensive and he hardly ever goes to the gym.

Milind Soman continued: “The idea of Fight Lazy is that everybody is lazy, including Milind Soman.

“He fights it every day, you can also fight every day.

“And the second thing is, to choose an exercise to start with, that you don’t hate… I exercise for 10 or 15 minutes every day and people think I am really fit.

“I don’t go to the gym, I have never been to the gym as a routine to work out.

“That’s what we want people to understand that it’s not difficult, and you can do things to make it enjoyable.” 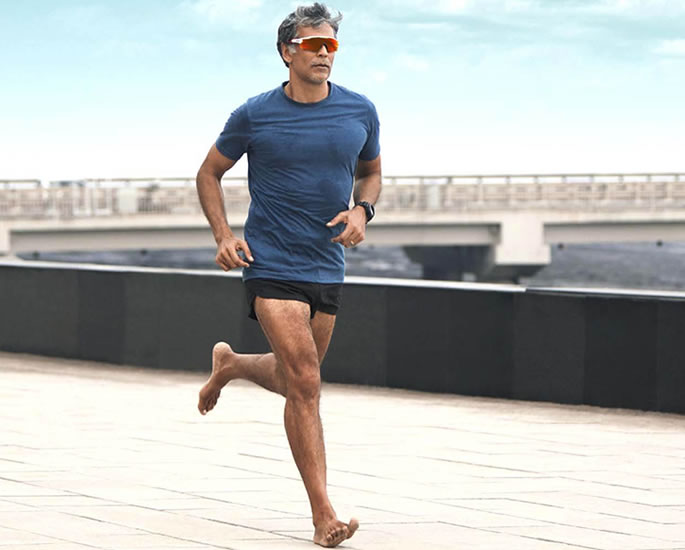 In addition to working out for just 15 minutes a day, Milind also does not impose a lot of dietary restrictions on himself.

He said: “I don’t have cheat days because I have no restrictions. I have no diet. I eat everything. Whatever you put in front of me, everything.

“I just focus on a few things sometimes like I need to eat a lot of vegetables, and a lot of fruits, but I eat everything else.”

When it comes to encouraging his fans to be fit, Milind asks them to do push-ups in exchange for selfies.

But he was surprised when people took up his challenge as his initial intention was far different.

“The reason I started it, some seven or eight years ago, was when this craze about selfies started. Everybody wanted to have a selfie, and even today it’s like crazy.

“And I don’t like taking pictures unless I am paid. I was like I don’t want to say no. It’s not nice to say no, especially if people like you.

“So I say if you want a picture with me, you have to do something for yourself first, and make this experience more meaningful.

“For me, it becomes more enjoyable because I am seeing somebody do push-ups and I’m very happy, and I am happy to take the picture with them.

“I thought everybody would say no, so I won’t have to take any selfies.

“Surprising, almost 95 to 98% of people say yes. Wherever they are, be it airport, railway station, or highway, they do it, which I am happy about.”

Dhiren is a journalism graduate with a passion for gaming, watching films and sports. He also enjoys cooking from time to time. His motto is to “Live life one day at a time.”
5 Best Makeup Palettes for Desi Women
How to avoid Dry Skin in the Summer