Muhammed Bashir, aged 80, sexually assaulted a young woman on the 192 bus in Manchester. The prolonged incident left the woman in tears.

"It wasn't just a brush, it was deliberate."

Muhammed Bashir, aged 80, of Moss Side, received a suspended six-week prison sentence at Manchester Magistrates’ Court after being found guilty of sexual assault.

He sexually assaulted a young woman on the 192 bus in Manchester in May 2017. The ordeal left the victim terrified and in tears.

Bashir, who suffers from Alzheimer’s, denied the charges. He claimed he does not need to “seek sexual gratification elsewhere” as he has sex with his wife “two or three times a month”.

He said he only recalls touching the student’s shoulder.

The court heard that Bashir touched the woman inappropriately as she paid the bus driver.

The victim told the court: “I felt something touch my underneath.

“It went round to my back and near my bum. I turned round and there was that man stood behind me.

“He took his hand off me after I turned around. It wasn’t just a brush, it was deliberate.”

She said that Bashir then reached “right underneath” and grabbed her between the legs.

The woman added: “He only let go when I turned around and I saw him take his hand off… then he moved his hand round to my bum.

“It made me feel horrible and disgusting. When you’re in that position, you don’t know what you’re going to do.”

The woman ran to the upper deck before breaking down and calling her mother when she noticed Bashir had followed her.

“I rang my mum but I was so scared and shocked, I struggled to speak. She said to go and speak to the driver and the man came upstairs after me and I sat right at the back of the bus.

“My friend asked me if I was okay, but that’s when I saw him come upstairs and he was edging further back and moving seats further back to where I was.

“I was really scared. Straight away I went downstairs and told the driver this had happened.” 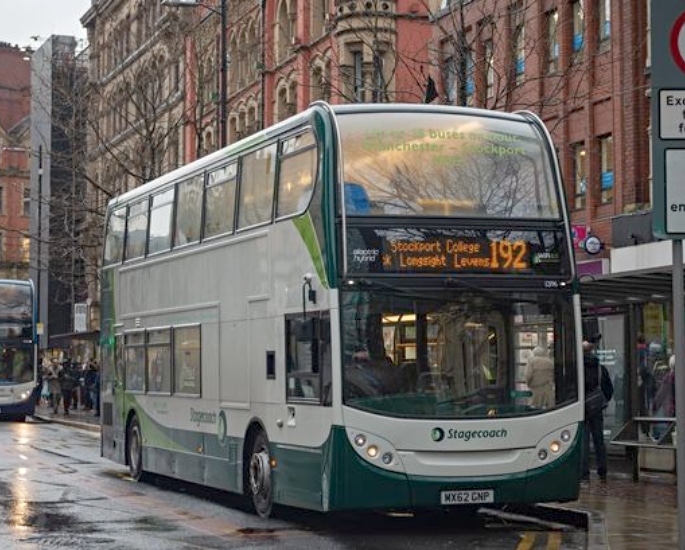 The driver stopped the bus and as everyone got off, Bashir came downstairs. The woman said to the driver “this is the guy”, but as that happened, he touched her again.

“I just wanted to get past him as quick as I could but he grabbed my bum again. I just turned around and said ‘why are you doing that?’

“He knew exactly what he was doing, he was smirking at me and I just wanted to get off the bus and I wanted the ground to swallow me up.

“He looked like he was getting a rise or a buzz out of it. When I turned around I saw him take his hand off.”

The woman took refuge in the driver’s cabin and Bashir smirked at her.

Bashir was arrested after the driver locked the bus doors and called the police.

He denied any wrongdoing and claimed he was showing his bus pass at the time of the incident and had accidentally touched the woman’s shoulder.

A probation report about Bashir said: “What little he can remember about the offence was touching the victim’s shoulder, which he states was an accident when he was getting on the bus.

“He stated that he had sex with his wife two to three times a month and therefore would not need to seek sexual gratification elsewhere.

“He has a good relationship with his wife, he has a family with children and grandchildren who visit him on a regular basis.”

Bashir’s lawyer John Richards said: “There’s nothing to suggest this woman was a vulnerable person, she’s not old or disabled or anything like that.”

The victim said in an impact statement: “He’s just a dirty old man who gets a thrill out of touching people inappropriately.

“He’s dirty and sick and this has made me feel vulnerable and upset. I don’t feel like I can get on the bus now.”

“The male who did this is a disgusting and sleazy old man and this incident has had an effect on my confidence.

“I am normally quite an outgoing person, but this incident has made me not want to go out in the world anymore.”

Chair of the bench David Harrison said: “This offence is serious because of the distress that your actions caused to the victim and the long term impact of a member of public going about their daily business.”

Following the trial, Muhammed Bashir was found guilty of sexual assault. He was handed a six-week prison sentence, suspended for 12 months.

He was also ordered to sign the sex offenders register and pay the woman £500 compensation.

Mr Richards added: “He suffers from Alzheimer’s and has emphysema and when it comes to signing the register, he may well forget to do that.”

Dhiren is a journalism graduate with a passion for gaming, watching films and sports. He also enjoys cooking from time to time. His motto is to “Live life one day at a time.”
Boxer Amir Khan’s Venue Venture in Need of Ideas
‘Turban Traveller’ Drives from Delhi to London in 131 Days