Activist Malala Yousafzai has announced that she got married following a small Nikkah ceremony in Birmingham.

"We are excited to walk together for the journey ahead."

Activist and Nobel laureate Malala Yousafzai announced she had a Nikkah ceremony with her partner in Birmingham.

Malala and Asser Malik had a small ceremony in front of their families.

The 24-year-old called it “a precious day” in her life.

“Today marks a precious day in my life.

“Asser and I tied the knot to be partners for life. We celebrated a small Nikkah ceremony at home in Birmingham with our families.

“Please send us your prayers. We are excited to walk together for the journey ahead.” 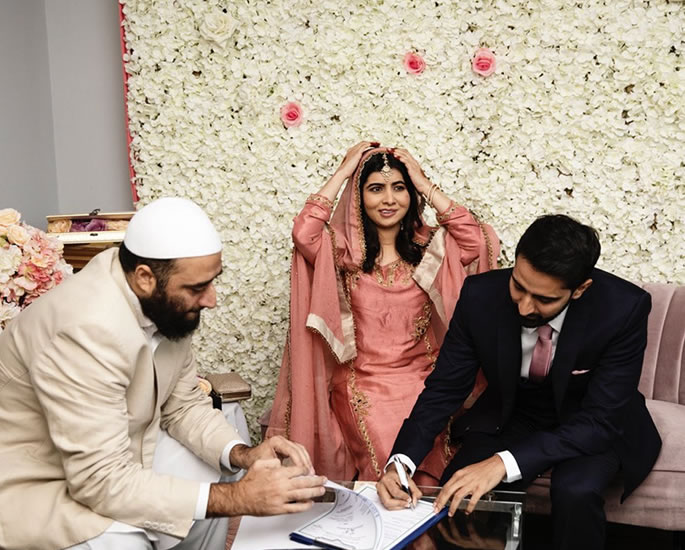 Malala wore a peach-coloured outfit while Asser opted for a navy suit.

Following the announcement, celebrities from around the world sent messages of congratulations.

“Congratulations on this wonderful moment!”

Asser Malik is a general manager at the Pakistan Cricket Board (PCB) and has worked there since May 2020.

He was previously an operational manager for the Pakistan Super League (PSL) team Multan Sultans.

Malala previously spoke about her misgivings around marriage.

“I still don’t understand why people have to get married.

“If you want to have a person in your life, why do you have to sign marriage papers, why can’t it just be a partnership?

“My mum is like… ‘Don’t you dare say anything like that! You have to get married, marriage is beautiful’.”

While many congratulated Malala, others criticised the Nikkah.

A lot of social media users pointed out that she tied the knot just a few months after speaking against the idea of marriage.

If hypocrisy had a name, its Malala.
Fake feminist who did nothing to protect the Pakistani girls abduction by Chinese, and watched the atrocities against Pakistani girls from minority communities! Shameful! ?? pic.twitter.com/9bDty0F8Xy

Another said: “Moral of the story: Don’t trust liberals! They are the biggest radicals and liars.”

Others questioned why she married a Pakistani man.

“Quite shocked to learn Malala married a Pakistani guy.”

“She is only 24. I thought she went to Oxford University for study, she would fall in love with a handsome progressive English man at Oxford and then think of marrying not before the age of 30. But…”

Malala first garnered headlines in 2012 after being shot by the Taliban in a bid to silence her as she wrote about her experiences during the Taliban’s influence in the Swat Valley region of Pakistan.

She found refuge in the West Midlands and went on to become the youngest person to win the Nobel Peace Prize.

Dhiren is a journalism graduate with a passion for gaming, watching films and sports. He also enjoys cooking from time to time. His motto is to “Live life one day at a time.”
Pakistani Man among Dead at Astroworld Music Festival
Man used Taxi Licence to Hide Drug Dealing