Janhvi Kapoor is ready to Party in Shimmering Power Suit

Janhvi Kapoor dressed up in a black sequinned power suit and posed for pictures that she shared with her Instagram followers.

Janhvi opted for a subtle and fresh makeup look.

Janhvi Kapoor is the epitome of fashion.

The Roohi actress took to Instagram to share several photos of herself dressed in a stylish power suit.

Janhvi’s latest look instantly went viral and has since amassed over 670,000 likes and 4,000 comments.

In the photoshoot, Janhvi can be seen wearing a black sequinned power suit.

Janhvi shared the pictures of her glamorous outfit and captioned her post with a simple, black heart emoji. 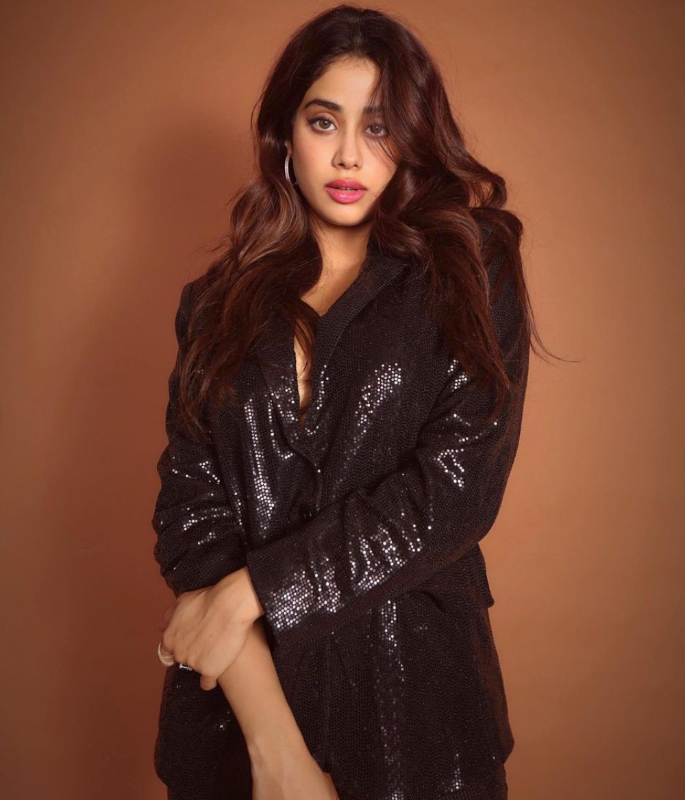 Janhvi opted for a subtle and fresh makeup look.

Janhvi wore a glossy pink lip shade, a light pink blush on the cheeks and a light brown eyeshadow to complete the look.

The actress also took to Instagram recently to share her version of the viral ‘Pooja, what is this behaviour?’ meme.

Janhvi Kapoor could be seen wearing a blue top with a triangular cut-out and baggy white shorts.

Celebrities, including Arjun Kapoor, Shanaya Kapoor and Sunny Kaushal, and fans flocked to the comments section to praise the actress.

“Oh brother, what has happened to her?”

Janhvi recently wrapped up shooting for her upcoming film Milli. The film marks the actress’ first collaboration with her father Boney Kapoor.

The upcoming survival-thriller film Milli is believed to be a Hindi remake of the 2019 Malayalam film Helen.

Janhvi Kapoor shared a note on Instagram to mark the completion of the film.

“My first film with papa, of whom I’ve only heard stories of all my life as a producer.

“I finally know what everyone means when they say you give your heart and soul to each film you take up.”

The actress also had Good Luck Jerry, Mr and Mrs Mahi, and Dostana 2 in the pipeline.

Ravinder is a Journalism BA graduate. She has a strong passion for all things fashion, beauty, and lifestyle. She also likes to watch films, read books and travel.
Is Racism an Issue for Fashion?
Urvashi Rautela stuns Fans in Sizzling Mini Dress