An Indian bride from Bihar had a unique wedding. She surprised her groom by arriving at the procession on a Bullet motorbike.

She was in her full bridalwear and wearing sunglasses.

Unique wedding processions in India are a growing trend and it was the same for this Indian bride who decided to arrive on a motorbike.

Nikki Raj rode a Royal Enfield Bullet motorcycle to the procession. When Nitish Kumar saw his bride, he was surprised.

It was reported that Nitish travelled from his home in Chiraiyatand to the bride’s house as part of the procession.

However, when he arrived, there was no sign of Nikki.

Nitish waited but was surprised to see his future wife on a motorbike riding towards him. She was in her full bridalwear and wearing sunglasses.

Guests cheered as she was guided towards the wedding pavilion. Some guests filmed the unique wedding procession.

Crowds gathered as the Indian bride made her way towards the groom.

After reaching the area, Nitish and a few other guests helped Nikki off the motorbike.

They made their way up to the pavilion where the wedding took place. Both went through the traditional procession before exchanging garlands. 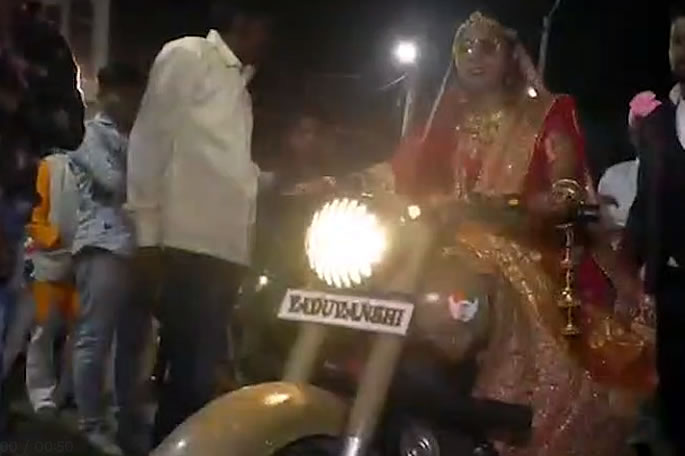 Wedding processions like this one are becoming more prominent in India. Some communities are even creating their own traditions.

In one case, two sisters were set to get married and had their baraat, something which is usually performed by the groom.

They rode horses and wielded swords to reach the houses of their respective grooms in Khandwa.

Sakshi and Srishti performed their baraat as part of a tradition followed by the Patidar community.

The brides were seen in elegant bridalwear and completed their looks with turbans and sunglasses.

As they continued with their procession, guests followed. But locals also gathered to witness the unique wedding tradition.

People were seen dancing in the street, celebrating the upcoming wedding of the two sisters with their grooms.

Meanwhile, people showered the brides with money as they continued their journey on horseback.

Srishti explained that she is proud to be a part of a community which has been following the same tradition for years.

She said: “I feel proud to be part of this community and that they have been following this tradition.”

The father of the Indian sisters revealed that the tradition has been ongoing for hundreds of years. He also urged people from other communities to follow the cultural practise and to give respect to the women of India.

Dhiren is a journalism graduate with a passion for gaming, watching films and sports. He also enjoys cooking from time to time. His motto is to “Live life one day at a time.”
Pakistani Airport Officials ‘extorting’ Money over Coronavirus
Indian Husband attacked Wife after She Left for Lover