Big John’s Groom arrives at Wedding on a Tank

The heir to fast-food chain Big John’s arrived at his wedding in style. Jaz Johngir decided to attend his wedding on a tank.

"It was amazing. People were staring and taking pictures."

In another example of extravagant Asian weddings, Big John’s Jaz Johngir arrived at his wedding on top of a military tank.

The 25-year-old is the son of fast-food entrepreneur Johngir Saddiq, also known as ‘Big John’, who is known for his chain of restaurants throughout the Midlands.

Jaz made a spectacular wedding entrance on top of the tank. This was followed by a convoy of luxury cars including Lamborghinis, Rolls-Royces and Bentleys.

Expensive cars are a common feature within modern Asian weddings. Several are hired by family members and are driven in a convoy to the wedding as a way of portraying luxury.

This is one example which shows that no expense is spared to ensure that a wedding is a memorable, yet flamboyant event.

Jaz’s wedding took place in Bolton on August 27, 2019, and the tank and supercars guaranteed a crowd.

The memorable stunt was a modern take on the ‘Baraat’. Traditionally, the groom travels on a horse to meet the bride’s relatives. 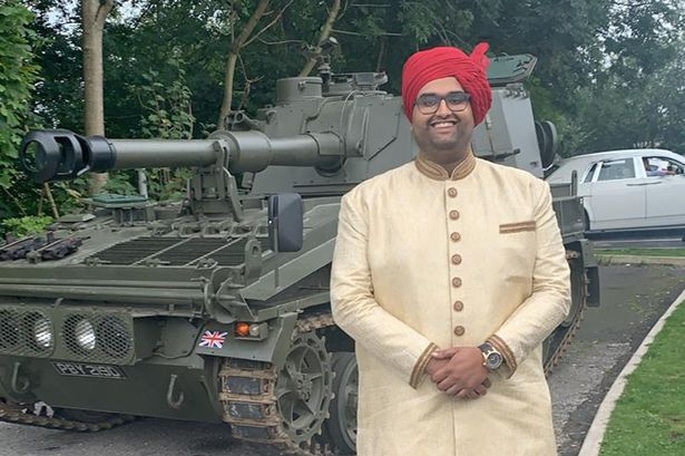 Competitiveness between families when it comes to South Asian weddings is always a huge thing. Families are always looking to have a bigger wedding than the last person.

Mohammad spoke about the extravagant convoy. He said:

“It was like a movie! I went up in the convoy from Birmingham to Bolton, there were around 250 people all travelling in it.

“It was amazing. People were staring and taking pictures.

“We left around 12 pm and arrived at around 4 pm at a Costa Coffee drive-thru where the tank was waiting.

“There were two coaches and a fleet of luxury cars. The groom’s dad hired a 6×6 G Wagon from Lord Aleem which his chauffeur drove up.

“The groom and best man were in that and Lord Aleem drove up in his Rolls-Royce.” 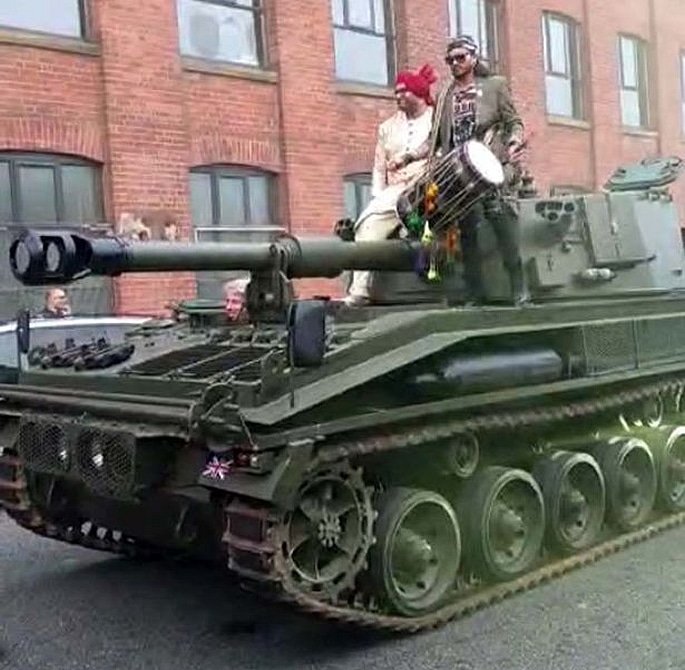 Mohammad, who is a business and politics student at Aston University spoke about the moment when Jaz climbed on top of the Abbott tank.

“The tank was only about 250 yards from the wedding, so the groom just got on top of it and stood on the turret.”

“It was rolled slowly to the venue followed by all his family’s cars with dancers and people playing steel drums.

“The bride and her family were really surprised. She had no idea.

“Big John is very sociable. He doesn’t want anyone to miss out.”

While it is not known how much the wedding cost, the fleet of luxury cars and the tank shows that no expense is spared when it comes to having a luxurious Asian wedding.

Big John’s is well-known within Birmingham and it first hit headlines by launching 99p meal deals in order to compete with rival takeaway restaurants in Erdington. There are currently 16 outlets across the Midlands.

It is up to the bride and groom as to what they want for their wedding. But in the modern-day, British Asian weddings continue to become bigger.

Jaz’s decision to have a tank was jawdropping and different, but it will only be a matter of time before another person decides to go one step further and have an even more extravagant stunt at their big fat Asian wedding!

Dhiren is a journalism graduate with a passion for gaming, watching films and sports. He also enjoys cooking from time to time. His motto is to “Live life one day at a time.”
Indian Man beheads ‘Adulterous’ Wife & Takes Head to Police
Amir Khan ends his Feud with Parents after Wife branded ‘Evil’