Holiday Couple held up on Bus in Peru by Armed Gang

A couple who was on holiday in Peru has spoken about their ordeal when they were held up on a bus by a heavily armed gang.

"Obviously we were scared. We tried to keep as still as possible."

A couple from Markfield, Leicestershire were in Peru celebrating their first wedding anniversary when they were held up on a bus by six armed men.

Atish and Jaspreet Vadher had been in the country for one day of the two-week-long trip when the robbery took place on their tour bus.

There were 20 other travellers of different nationalities when they and staff members were held up on Sunday, April 14, 2019.

The couple described the incident as “frightening” and had left them shaken, but said they would continue their holiday.

Dr Atish Vadher, who is a freshwater biologist at the University of Northampton said:

“All of a sudden the driver started panicking. Six heavily armed gunmen jumped out from the bush and stopped the bus.

“They stormed onto the bus, held us all at gunpoint and they started to steal everyone’s belongings.

“Obviously we were scared. We tried to keep as still as possible.

“One of the robbers leant over me to search my wife’s hands, during which his gun was resting into my neck.”

The tour guides, who were translating the gunmen’s demands, told the passengers to keep their heads down and do whatever they say.

“But thankfully the tour guides managed to convince them, ‘Don’t kill them, just take their stuff’.”

“They turned around to us and said, ‘Guys, give them what they need, don’t resist in any way’.”

Dr Vadher and his 28-year-old wife avoided having anything stolen as their bags were underneath their seats. However, 10 other tourists had passports, wallets and cameras taken.

Sadly me and my wife couldn’t fulfil our dream of seeing the Amazon Rainforest due to our tour bus being held up by 6 heavily armed gunmen in Peru that robbed our bus at gunpoint. Thankfully no one was shot/injured physically. Thanks @gadventures and reps. for getting us out! pic.twitter.com/etp8AaHfAD

Dr Vadher added that he and his wife would continue with their holiday.

“We have continued with our trip determined not to let this ruin our time in this stunning country.”

The couple later headed to Machu Picchu before flying to Bolivia. 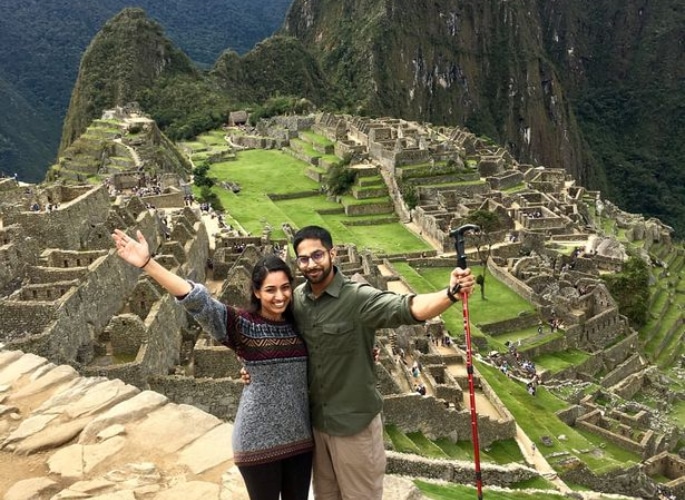 “On Sunday, 14 April, a bus carrying 22 G Adventures travellers and staff was held up by armed robbers while travelling by road from Puerto Maldonado to Tambopata in the Peruvian Amazon.

“No-one onboard was physically harmed during the incident, but 10 people were robbed of personal belongings.

“The safety and comfort of our travellers and staff is G Adventures’ top priority, and all involved in this incident have been assisted with their onward travel from the area.

“As a precautionary measure, all G Adventures trips in the area are currently avoiding this road, and will instead be escorted by a security guard to a different river port in order to arrive to Tambopata by boat.

“G Adventures is undertaking an investigation in conjunction with regional authorities relating to the safety of the region for future departures.

“A meeting took place on the afternoon of April 16, and we await the guidance of these authorities with regards to our operations in the area.”

The Leicester Mercury reported that the Foreign Office stated that it is reviewing advice to travellers after similar robberies had occurred in the area.

Dhiren is a journalism graduate with a passion for gaming, watching films and sports. He also enjoys cooking from time to time. His motto is to “Live life one day at a time.”
Indian Couple refused newborn Baby Girl until DNA done
Gunman jailed for Threatening Nightclub Bouncers