Rosie O’Donnell has offered an apology to Priyanka Chopra after wrongly assuming that Deepak Chopra was her father.

"To the Chopra wife, I apologise too."

Priyanka Chopra has hit back at Rosie O’Donnell’s apology after the comedian referred to the actress as Nick Jonas’s ‘wife’.

The US comedian was forced to issue an apology after she revealed she recently approached Nick Jonas and Priyanka.

‘Embarrassing’ her son and his girlfriend, Rosie took to TikTok to set the record straight.

However, she didn’t mention Priyanka’s name and referred to her as “someone Chopra” and then “the Chopra wife”.

After being called out for her initial apology, she insisted she knew Priyanka’s name.

In what appeared to be a dig at Rosie’s post, Priyanka shared “some thoughts” in which she suggested her name be Googled.

Priyanka also suggested that she should have been reached out to directly.

In her note, she began: “Hi everyone. Some thoughts.

“I have never taken myself so seriously to think everyone would know who I am, or my work for that matter.” 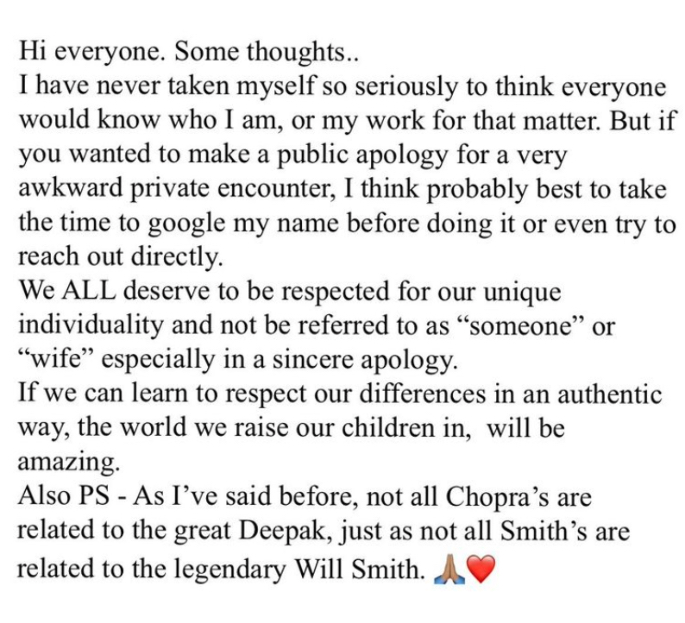 “But if you wanted to make a public apology for a very awkward private encounter, I think probably best to take the time to google my name before doing it or even try to reach out directly.

“We ALL deserve to be respected for our unique individuality and not be referred to as ‘someone’ or ‘wife’, especially in a sincere apology.

“If we can learn to respect our differences authentically, the world we raise our children in will be amazing.”

In her earlier TikToks, Rosie explained: “Seated next to us at Malibu Nobu was Nick Jonas and his wife, someone Chopra.

“Who I always assumed was Deepak Chopra’s daughter.”

“Am I the only one who thought that?”

In a later TikTok, Rosie said:

“I’m reading the comments about Nick Jonas and his wife Priyanka Chopra, who I mistakenly thought was Deepak’s daughter.

“And people thought that she was rude, she wasn’t rude, it was just awkward.

“She’s a very well-known actress and more famous than him, people were saying.”

She added: “Priyanka is her name, I hope I’m pronouncing that right.

“I just want to apologise to her and to everyone who thought it was inappropriate of me.