An armed gang subjected three Aston University students to a terrifying ordeal at a halls of residence. The raid took place on April 30, 2019.

"three young men were victims of an unpleasant and prolonged ordeal."

Two men have been sentenced after they were part of an armed gang that terrorised three students at an Aston University halls of residence.

Birmingham Crown Court heard that the men, who were wearing masks, subjected the victims to “an hour-long terror ordeal”.

Zaheed Ahmed, aged 20, came up with the burglary raid in an attempt to retrieve the cash he had given to one of the victims to “invest in a money-making scheme”.

During the horrific ordeal, one of the students had a knife held close to his face and was threatened before £1,000 was taken out of his account.

Alan Kent, prosecuting, explained that the raiders were “hostile and aggressive” throughout. He also said that the flat was ransacked as they looked through cupboards and drawers.

On the evening of April 30, 2019, the three students had been in one of the flats at Aston University halls of residence.

A fourth person had been with them but left. A short while later, they returned accompanied by Ahmed, Zaahid Choudhury and a third person who has never been identified.

The trio were all wearing balaclavas and were armed with two knives and a baseball bat. 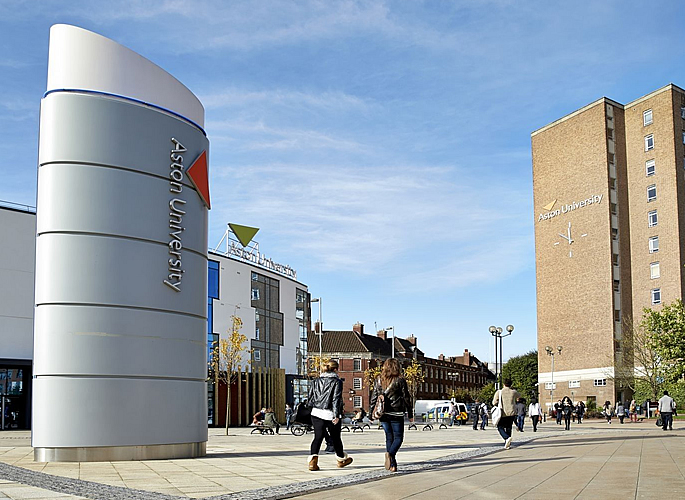 Two of the victims were forced into a bathroom where they attempted to conceal their valuables in their socks.

The third student had a knife thrust close to his eyes and threats were made before the armed gang took the victims’ phones and bank cards.

During the hour-long ordeal, Choudhury left the flat and went to an ATM where he unsuccessfully tried to withdraw £800 with one of the cards. He managed to withdraw £250.

One of the frightened students phoned his father and pleaded with him to transfer funds into his account. He revealed his pin number and £1,000 was withdrawn from the account.

Police later reviewed CCTV footage and tracked down Ahmed and Choudhury to another student flat.

Judge Francis Laird QC explained that Ahmed had got into debt after dropping out of a law degree and became “determined” to recover the money he had given to one of the victims.

He said: “The three young men were victims of an unpleasant and prolonged ordeal.

“They were terrorised for approximately an hour.”

Judge Laird went on to say that the incident had a “dramatic” effect on one of the victims. One of the consequences was that his laptop had been wiped which had contained photos as well as student notes.

He had also moved out of student accommodation.

When passing sentence, Judge Laird said he had taken into account that Ahmed had been described as an exceptional student and that both he and Choudhury were of previous good character.

Birmingham Mail reported that Ahmed was sentenced to six years and four months in a young offenders institution while Choudhury was handed a six-year detention period.

Dhiren is a journalism graduate with a passion for gaming, watching films and sports. He also enjoys cooking from time to time. His motto is to “Live life one day at a time.”
Women walked 20 km Carrying Pregnant Lady to a Clear Path
UK Government introduces Points-Based Immigration System