A group of women from Himachal Pradesh walked 20 kilometres while carrying a pregnant lady until they reached a clear path.

The women walked for 20 kilometres through rocky terrain

An act of kindness ensued in the Sainj valley area of Himachal Pradesh on February 16, 2020, when several women helped a pregnant lady by carrying her for 20 kilometres.

The valley and its surrounding areas are difficult to access due to a lack of clear paths and roads.

The pregnant woman, Sunita, needed to go to hospital but it was dangerous for her to travel due to the inaccessible paths.

It was reported that she was going into labour.

A group of women from the village of Shakti Marod decided to help her.

They built a seated carrier by tying thick logs together. The women also tied a chair in the middle for Sunita.

The women helped the pregnant lady to the chair and seated her. Two of the women then lifted the carrier up and held it on their shoulders.

The women walked for 20 kilometres through rocky terrain and steep slopes until they reached a clear path near the hospital.

An ambulance later arrived to transport Sunita to the hospital.

It was a dangerous route but Sunita made it to the hospital safely. 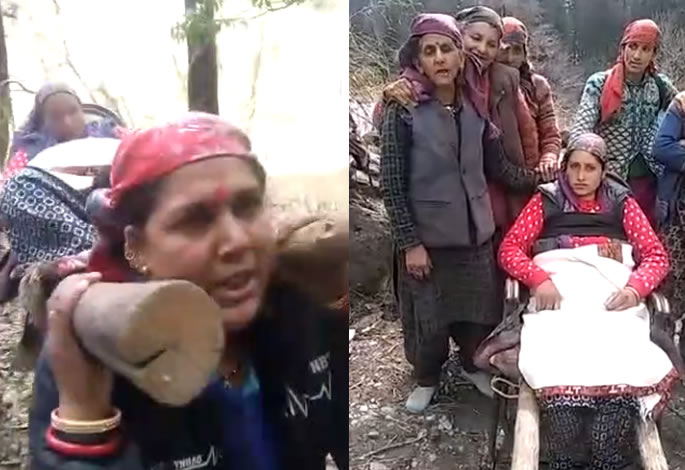 No clear path is a problem that many of the villagers face. Shakti Marod is one of the most remote areas in Sainj Valley and is still deprived of basic needs like roads.

Many of the village leaders have said that three nearby villages also face the same problem. They blamed the state government for the issue.

One person said: “It takes around five hours to walk the 20-km hilly route passing through dense forest.

“In the time of emergency, every minute is precious to save the life of a patient and the delay may prove to be fatal.

“But we have no option but to walk such a long distance and carry the patient on shoulders to reach the road.”

Bhag Chand, a resident in the area, said:

“Residents of three villages of the Sainj valley are the worst sufferers. They are deprived of road connectivity since Independence. The successive governments have failed to provide us with road connectivity.

“It is the duty of the state government to take care of the basic needs of people such as better health care, education and roads.”

Devender Kumar, of Shakti Marod, added: “Politicians come here during elections to seek votes but none of them has been able to provide us road connectivity.

“We urge Chief Minister Jai Ram Thakur to provide a road in our remote Shakti village in Kullu district. In the absence of road connectivity, it is very difficult to produce and market commercial crops.”

Dhiren is a journalism graduate with a passion for gaming, watching films and sports. He also enjoys cooking from time to time. His motto is to “Live life one day at a time.”
Unemployed Man wants a ‘Fair Wife’ in Matrimonial Ad
Armed Gang terrorised Students at University halls of residence