An unemployed man from Bihar has put up a matrimonial ad which has gone viral. In the ad, he is looking for a “fair wife”.

“Indian matrimonial ads are full-on but this is next level."

An unemployed man is looking for a bride and has gone about it by putting up a matrimonial advert.

However, it is his list of specifications which have attracted attention.

According to the ad, the man is looking for a wife who is “very fair and beautiful” and has the desire to increase India’s “military and sports capabilities”.

Within South Asian communities, the tradition of families publishing matrimonial ads is something which continues to be prevalent.

The advert was put up by a 31-year-old man named Dr Abhinao Kumar, a resident of Bihar.

According to the advert, Dr Kumar is currently not working.

He has listed a number of traits that he is looking for in his potential wife. Dr Kumar stated that he wants someone who is “any very fair, beautiful, very loyal, very trustworthy, loving, caring, brave, powerful, rich”.

His advert then went on to say that the potential bride must be “extremely patriotic to India with a keen desire to increase India’s military and sports capabilities”.

It seems that her patriotism to India is a priority for Dr Kumar as he capitalised the requirement.

The unemployed man’s demands did not stop there. His future wife is also expected to be an expert in “child-raising” and an “excellent cook”. 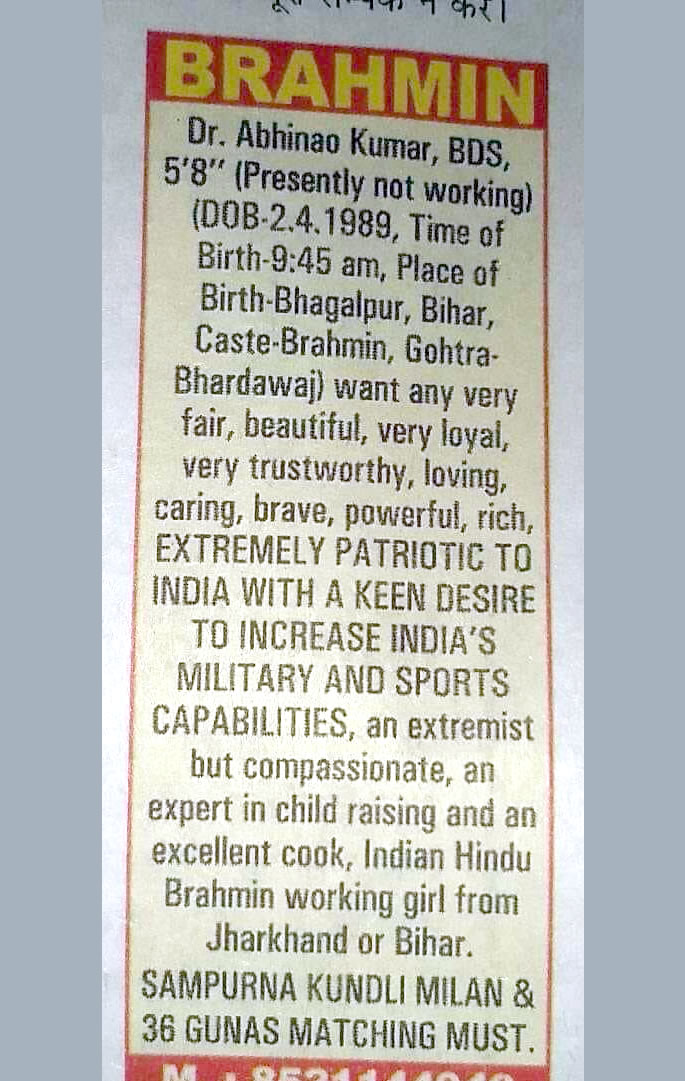 The matrimonial ad went viral and it became a source of entertainment for many social media users.

However, some people were concerned that the ad was misogynistic as well as the beauty standards that a large part of the Indian community still holds on to.

One user asked: “Why will a woman with all that calibre he mentioned, marry him? Too optimistic.”

Another person thought that the ad was over the top:

“Indian matrimonial ads are full-on but this is next level. Unemployed bloke wants beautiful wife who can cook dinner and boost India’s military power on the side.”

Indian matrimonial ads are full-on but this is next level. Unemployed bloke wants beautiful wife who can cook dinner and boost India’s military power on the side. https://t.co/5LrKVjGm87

Some social media users did not like the fact that such ads still exist and are mainly targeted towards women.

“Blows my mind that matrimonial ads are still a thing in India.”

Another commented: “And such racial discriminatory practice of matrimonial ads are quite normal in our society. Most of the people see no bad in this.”

One woman stated how such concepts are unheard of in some societies.

“One of the most entertaining parts of my study abroad was when my students discovered Indian matrimonial ads.

“Wasn’t aware the patriarchy had also added the ability to increase the country’s military and sports capabilities to an ideal wife’s list of desirable qualities.”

Dhiren is a journalism graduate with a passion for gaming, watching films and sports. He also enjoys cooking from time to time. His motto is to “Live life one day at a time.”
Young Man Stabbed to Death in Street Brawl
Women walked 20 km Carrying Pregnant Lady to a Clear Path