Miss Universe 2021 Harnaaz Sandhu has stated that she aims to be a part of Bollywood as well as Hollywood.

"I’d love to break the stereotypes."

Newly crowned Miss Universe 2021 Harnaaz Sandhu says she is looking forward to creating a niche for herself in Bollywood as well as Hollywood.

The 21-year-old has already starred in a few Punjabi films, including Yaara Diyan Poo Baran and Bai Ji Kuttange.

On the win, Harnaaz said:

“I feel so grateful and my heart is filled with so much respect for all those who have shown their faith in me and showered me with all their love.

“I want to use this platform to talk about the issues which we should all be concerned about.”

Harnaaz will now reside in New York City and will carry out duties as part of Miss Universe.

She explained that her mother, gynaecologist Ravinder Kaur Sandhu, has been an inspiration for her.

She said: “My advocacy is all about women empowerment with menstrual hygiene, my mom being a gynaecologist.

“This is what I’ve been majorly working on along with different organisations regarding breast cancer surgery and the fact that it’s curable when detected well in time.

“I’ll also talk about all those issues that the Miss Universe organisation is related to. I’d like to talk about the causes with the help of my mother.”

Following her win, Harnaaz said that such events are helping people to embrace “the real meaning of beauty”.

She continued: “After my win, in my community, people realise that it’s not only about looking beautiful, it’s about having that persona, aura, and having the depth in your voice to speak out for what you believe in… you are the leader of your own life.

“I think I’ve already broken stereotypes of what women are and can be and now I want to take this forward at large.” 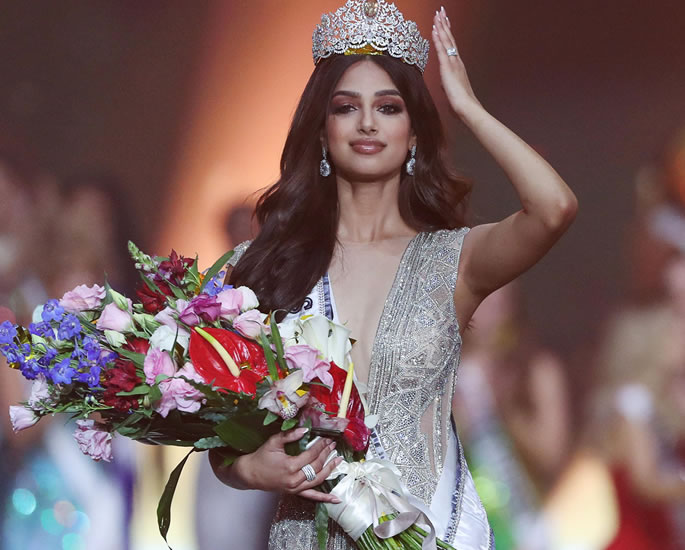 But she says all the participants are winners because they represented the people of their countries on the global stage with “enough confidence about your opinion”.

She said: “To have that throw in your voice that this is the difference you want to bring in your life… that’s more than enough to conquer anything in this world.

“You get to share your culture, country, background with every contestant.”

“That’s a huge achievement in itself. I’m going to take a lot of things from my co-contestants because I believe we all are winners. Every girl is a Miss Universe.”

Her win will now generate new interest when it comes to films.

“They are very excited to have me as part of their movies and I’m looking forward to showing my talent on the big screen.”

Like actress and Miss World 2000 Priyanka Chopra, Harnaaz Sandhu also aims to bridge the gap between Indian and international cinema.

“I’d love to be a part of not just Bollywood but Hollywood too, through that I’d love to break the stereotypes.

“I think 21st-century people get inspired by movies and web series, so I’d like to inspire people and try to talk about the issues that should be eradicated from society.”

Dhiren is a journalism graduate with a passion for gaming, watching films and sports. He also enjoys cooking from time to time. His motto is to “Live life one day at a time.”
Ranvir Singh confirms Relationship with 26-year-old Toyboy
Minal Khan and Ahsan Mohsin Ikram criticised for PDA Video