An elderly Indian couple bravely stopped two armed robbers at their home in Tamil Nadu by fighting back. The incident was captured on CCTV.

"That was scary, that robber was trying to strangle the old man."

An old Indian couple is being praised for their bravery after they fought off two armed thieves by throwing anything they could get their hands on.

Footage of the incident was captured on CCTV cameras at the couple’s home near Kadayam, Tamil Nadu. The incident happened at around 10 pm on August 11, 2019.

In the video, a masked man armed with a sickle snuck up behind 72-year-old Shanmugavel as he was sitting outside his house. The attacker tried to strangle him with a piece of cloth.

His wife Senthaamarai came out of the house after hearing a noise. As she does so, another armed thief is seen. The elderly woman quickly grabs some slippers and starts throwing them at the intruders.

After freeing himself, Shanmugavel helped his wife fight off the attackers. Buckets and plastic chairs were soon used as weapons.

The Indian couple continued to throw whatever they can before the two men fled.

Senthaamarai suffered a minor cut to her hand and her gold chain was stolen.

The footage went viral and social media users gave credit to the couple for their heroics. One user wrote:

“That was scary, that robber was trying to strangle the old man. But the couple is brave enough. Hats off.” 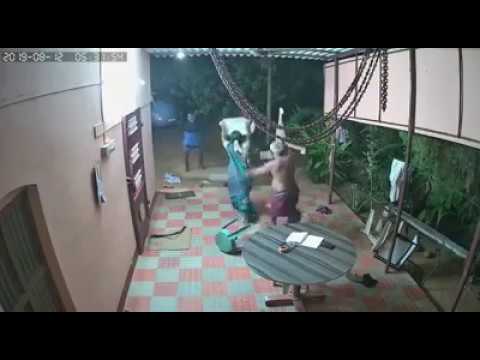 Officers were alerted and they soon arrived at the scene. Senthaamarai seemed unfazed by the incident as she explained:

“One of them hurt my hand with the sickle and in that gap, managed to steal my gold chain.

“But my husband is unhurt and I am happy we chased the intruders away.”

Shanmugavel had installed cameras around his house after being burgled twice in three years.

He said: “We live in a farmhouse at the edge of the village and it is located very close to the forest. It is a five-acre land and we have been here for 40 years.

“We were acutely aware of the fact that we were susceptible to attacks from robbers because our house was isolated from the rest of the village.

“When I was getting strangled, I immediately began to make loud noises to get my wife’s attention.”

“I knew it didn’t have to make sense. It just had to bring her to the entrance.”

The couple’s relatives and friends went to the house the next day to see if they were okay. Their son Ashok, who lives in Chennai, went back to his parent’s house.

He said: “Amma [Senthaamarai] has sustained a cut injury on her right hand.

“She is a courageous woman who took on the armed criminals instantly on seeing Appa [Shanmugavel] being strangled. By God’s grace, nothing untoward happened.”

Police officers used the CCTV footage to start an investigation. They have filed an FIR, but the two men have not been identified.

Dhiren is a journalism graduate with a passion for gaming, watching films and sports. He also enjoys cooking from time to time. His motto is to “Live life one day at a time.”
Four Men convicted of Murdering Dad with Axe and Machete
Indian Man jailed for Life for Staging Fiancee’s Murder