A bold psychological thriller, Anima State is a brutal expose on Pakistani society. In an exclusive Gupshup with DESIblitz, director Hammad Khan talks about his intentions behind the film.

Anima State offers a glimpse into Pakistani life and its political sphere.

Of them included the Pakistani psychological thriller, Anima State directed by Hammad Khan, which celebrated its European premiere at Cineworld Haymarket.

The film follows a nameless man who masks his face with bandages and goes on a killing spree in Pakistan.

Strangely no one seems to notice his murderous intentions. He then decides that he will commit suicide live on air to make a point. 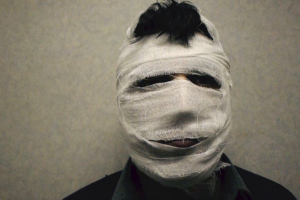 A hugely uninhibited film, Anima State offers a brutally honest glimpse into contemporary Pakistani life and its political sphere. It is dripping with satire and symbolic messaging.

Before the special screening at LIFF, DESIblitz spoke exclusively with Hammad Khan to get an intriguing peek into the mind and motivation behind his latest film, Anima State.

London based filmmaker, Hammad Khan was born in Pakistan, and it is his homeland that forms the backdrop of his last two films. The key attraction of independent films is the opportunity for filmmakers to explore topics without creative restriction.

Yet, Hammad Khan’s first film Slackistan (2010), about the lives of a group of young people, was banned in Pakistan. The country’s Central Board of Film Censors objected for a number of reasons including the use of swearing and vulgar language. 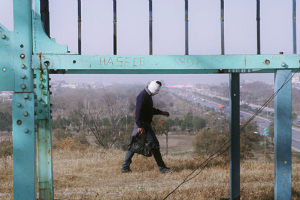 Khan argued that, the film ‘is fiction but based very much on reality’ and that ‘the censor board’s verdict is oppressive’.

DESIblitz were curious to find out what inspired Anima State and how the film had been received so far.

In a separate interview, Khan explained the idea for the film was actually born out of advice from his psychiatrist wife:

“I didn’t know what to do next, I couldn’t move forward and I had a lot of issues with was happening in Pakistan, what my place in it was, whether I should even make a film.”

Anima State is his way of dealing with what is happening in Pakistan. Khan tells us that creatively he felt he had accomplished the goal of translating his personal artistic vision on screen. 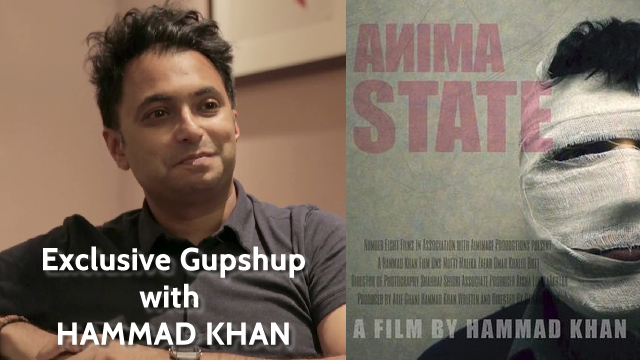 The opening scene features a bandaged masked man, who openly goes on shooting and killing spree in a public place. The image of the lifeless, blood stained bodies around the assassin is shocking and uncomfortable.

What urges the viewer to watch on is, the need for answers – why? as the protagonist walks away without consequence. 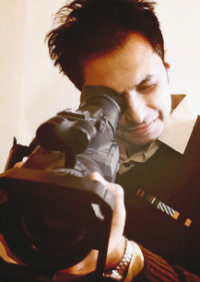 The key character’s body language is heavy; slumped, unremorseful but desperate as he makes his way to a policeman, confesses his crime and pleads with the officer to arrest him for the heinous acts he has committed.

The feeling of justice is short-lived as the man in uniform sends him away with indifference. Even when he goes to a news studio and pleads with a news presenter to be able to confess on air, of killing several people, he is turned away, the story is not sensational enough.

The journey that follows is intentionally disjointed as, retro music and black and white movie clips are incorporated into the film, alongside the various references to political problems in Pakistan.

The amalgamation of all these elements is clever, as the issues shown, such as power cuts and authoritarian control of media for example, could easily be from the past and raises the question – are these issues of modern day Pakistan or a time that has passed?

With this symbolism, the masked man’s frustration is further amplified, as even when he finds himself in a room of young people talking about change, a sudden power failure attracts no reaction from the students and the debate continues once light in the room is restored.

The scene that seems to encapsulate the conditioning by media on the people brilliantly features the depressed masked character, as he stops to watch a monkey dancing. The monkey moves at the beat of his master’s drum and at times, from a beating of his master’s stick.

Anima State is a story that unravels with honesty; the film portrays the very real primal instincts of love, companionship and sex of man. The success of the film is how Khan attempts to picturise the ineffable effects of the subconscious, to what is going on in the world today.

True to the title; ‘Anima’ meaning; ‘the part of the psyche which is directed inwards, in touch with the subconscious’ and ‘State’ defined as; ‘condition, situation, or country’.

The challenge for the viewer is, however much we try to get closure in our own minds of the disturbing scenes we witness throughout the film, nothing is literal. It is because nothing is literal, that you are left with a feeling of helplessness. Maybe a feeling shared by characters in the film? Who knows? Like a painting, the experience and interpretation is individual.

So, what next for this innovative film maker? Hammad Khan tells DESIblitz that he would love to explore London in his next project. We look forward to seeing more this bold and talented director soon.

Minal is currently a brown/yellow toned East London resident with a strong Mancunian accent and a weakness for samosas. As a former part time model recently discovered that she has the perfect face for writing. Her motto is: 'Peace, Love and Curry.'
Changing Technology in Bollywood Films
Salman Khan is ready to KICK