Indian actress and television personality Gauahar Khan is set to marry her fiancé Zaid Darbar by the end of this year, on December 25, 2020.

The couple announced their wedding by uploading their quirky wedding card on Instagram.

Zaid Darbar, who is music composer Ismail Darbar’s son, is a dancer and choreographer.

The duo met during the lockdown in a grocery store and it was Zaid who slid into Gauahar’s DMs.

The couple exchanged engagement rings last month and are all set to take their relationship to the next level.

Gauahar and Zaid both shared the first glimpse of their wedding card on Instagram and wrote:

The card is in the form of an animated video featuring both Zaid and Gauahar as cartoon characters. It reads:

“The lockdown love story…Quarantine drives and parking garages is what date nights looked like.

“No matter the distance, we always found ourselves closer together…We can’t wait to spend the rest of our lives with love.”

They also uploaded a pre-wedding music video on Instagram a few days ago which shows the couple dressed in beautiful traditional attire and dancing with each other.

She captioned the video:

While the couple’s fans have been excited to hear this news, there have been some who have commented on the 12 year age gap between the two.

“Let me clear this, the age difference that has come out is wrong. 12 years is wrong.

“He is way more mature than I am and he has brought a sense of balance in my life.” 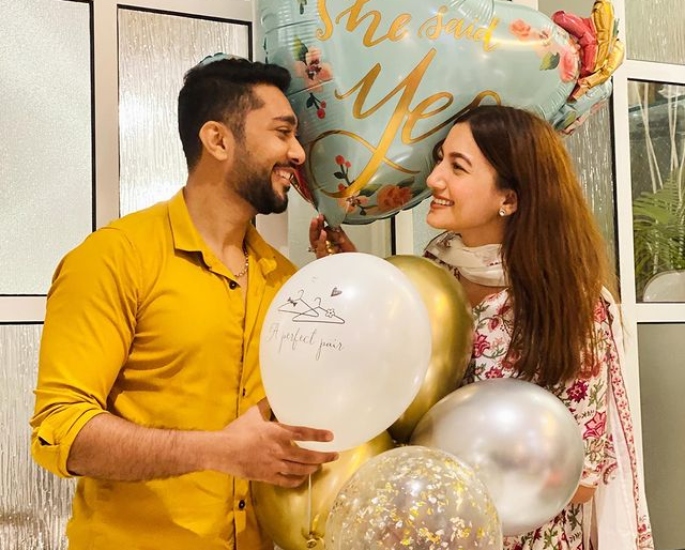 There also had been rumours of dissatisfaction among Darbar’s family regarding their relationship.

Reacting to questions regarding his son’s marriage with Gauahar, Ismail Darbar told Times of India:

“If Zaid and Gauahar get married, why won’t I give aashirwad to Gauahar?”

“If Zaid wants to marry her, why would I object? Zaid is nearly 29, he knows what he’s doing.

“In fact, that’s exactly what Ayesha (his wife) told him.

“She told him that if he’s happy we’re happy too, and he is old enough to decide what’s good for him.”

Gauahar rose to fame with her stint in Bigg Boss 7 after spending many years in the entertainment industry. She was declared the winner of the season.

Gauahar Khan also dated Kushal Tandon, a television actor, during and after the show.

However, after some time, the couple split due to ‘religious’ differences.

She recently entered Bigg Boss 14 as a mentor along with TV actors Hina Khan and Siddharth Shukla.