DUET: Connecting Culture and Experiences of UK and India

DUET offers a year-long conservation between its users from the UK and India. We speak with its creators to learn more about this intriguing app and how it bridges culture and experiences together.

"In our lives today, there is very little space for meaningful self-expression."

Have you ever imagined connecting with someone across the globe? Gradually sharing each other’s culture and experiences with ease and simplicity? DUET is an app that aims to create this conversation, building connections.

It is an experimental project, setting up a year-long conversation between two individuals from UK and India.

One can easily compare it to pen pals; however, it offers slight variations. Instead of long emails to each other, users connect through daily questions asked by the app. These can relate to personal experiences or social/topical issues.

DUET also gives anonymity to users; meaning they cannot identify their partners. This means they may engage in conversations with one or hundreds of other individuals.

While the project will undoubtedly highlight the different cultures of India and UK; its creators, Quicksand and Invisible Flock, also aim to explore similarities. How various societies can find common ground right down to a human level.

DESIblitz had the opportunity to try out the app, as well as speaking with Babitha George, Founder of Quicksand, to learn more about its fascinating journey.

The app began as a joint venture between Quicksand (based in India) and Invisible Flock (based in the UK). The two companies looked at how SMS became seemingly dated, thanks to the popularity of WhatsApp, Snapchat and more.

However, Babitha reveals they found it “strange that within a few years, SMS had assumed a nostalgic element that reflected a slower past, one that was slower and more deliberate.” As a result, she explains:

“We started talking about the possibility of using SMS as a means to connect people across cultures in a more personal one-to-one fashion, leveraging the minimal text-only nature of SMS to keep these interactions simple, while also allowing for words to reveal intimate details gradually.”

Both also initially decided for the element of anonymity, as Babitha expands: “People can be entirely free to express themselves to one another, and share with just one other, feeling like someone is listening and caring daily, through one simple exchange.” 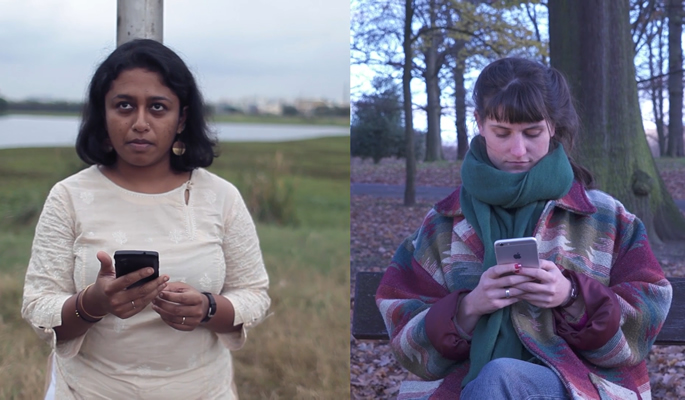 The choice of anonymity can already feel innovative. It has become a common-place scenario where many apps ask you to create a profile. Why then did DUET decide to abandon this? Shreya answers:

“We feel this allows for [free] sharing, without the associated pressures of creating a profile. Duet is in a way anti-social media or slow social media and it is our hope that as a platform it will go on to be used to connect other distant groups of people.

“The anonymity is a key part of standing outside this social-media-driven world.”

Quicksand and Invisible Flock first began creating DUET in 2014. Initially, it was called Kite in honour of Ahmedabad’s Kite festival, where they first discussed of the app, and “building off the idea of random kites flying across to meet and flutter along in the open skies”.

Its development took 3 years, with a launch finally unveiled in January 2017. Babitha explains they first experimented with the interaction between participants:

“During our first co-working session together in Bangalore, we ran a very informal test session with a few of our friends in India and the UK.

“This test revealed one of the core aspects of our current experience, the use of facilitated probes over time that would help build a gradual snapshot-based view of oneself as well as a partner.”

From this, DUET evolved to include daily questions – carefully designed to: “make one pause and notice an everyday detail that often goes unnoticed. And be able to see a similar glimpse from an anonymous person in another country.” 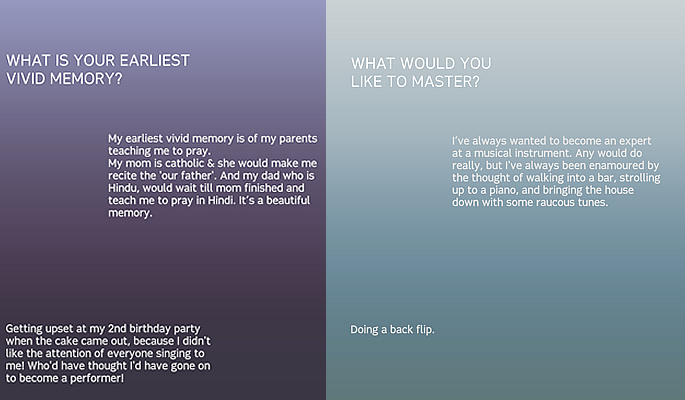 Babitha describes the development as a “slow but rewarding one”. While it has taken 3 years for DUET to come to life, she explains the companies have used this as a beneficial learning process. She explains:

“A large part of this time has been spent in attempting to raise minimal funding for the project. However, what this pace has also allowed us has been multiple opportunities to think through what this experience should be like for our participants and ourselves.”

How does the app work?

Once you have installed and joined DUET for the first time, the app will pair you up with an individual from the UK or India, dependent on your location. When you have been successfully paired up, the app will ask you questions daily.

With each new question, you and your partner can give answers. But you can only see their response once you have created your own. Over time, you can look back on both sets of answers, which gradually build a profile of each other’s character.

In some cases, as can be expected, individuals may not answer daily. However, don’t fret if you’re linked with a user who misses questions. If they consistently miss questions for 3 days, DUET automatically links you to a new participant.

Your previous companion will also be paired with someone else. During our use of the app, we did encounter people who didn’t answer questions. Luckily, the app did eventually pair us with a responding user. 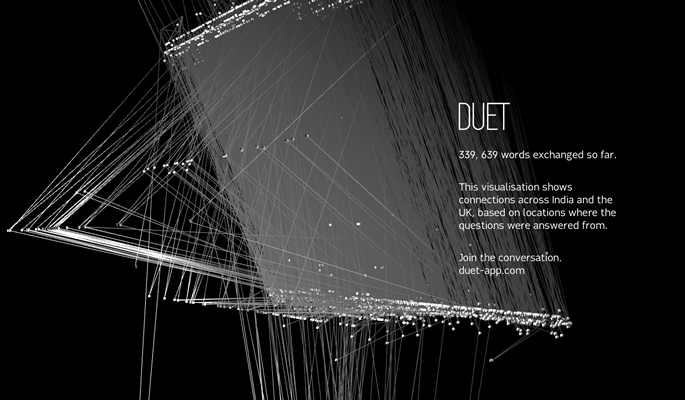 In addition, we also liked that the notification system behind DUET. The app will inform you of when there is a new question and when your partner has responded. It also will send a reminder to answer the day’s question if you haven’t yet.

This data compiled is then recorded for visual representation on their web platform. Since its inception in February 2017, it has recorded every question asked and all the answers received – those who are linked together and those who aren’t.

Viewed on a desktop, this provides a great insight into the responses of Britons and Indians. While there may be some differences, one can also find some similarities, which Babitha says:

“What Duet has managed to do really well is to highlight this innate humaneness within us all – we have similar worries and concerns, we are inspired by things, we are delighted and find beauty in similar things- while also giving us a chance to appreciate cultural and geographical uniqueness.”

Quicksand and Invisible Flock also held public artwork displays across the UK and India, in cities such as Leeds, Mumbai, London and Goa. These also project the many conversations held between people, showing their evolving relationships.

As mentioned, Babitha calls the app “anti-social media”, with its unconcern for creating profiles or an online identity for users. Instead, it aims to change how we share information through technology.

Victoria Eaton, Creative Director of Invisible Flock says of social platforms: “They push through the traditional news routes and allow individuals a voice, but what is this voice really, and is it getting through and to whom and to what end?”

Like many of us, she also admits she alters content such as Instagram images but says: “What do I know about the person looking into my world as I peer back out into a million different feeds and channels?

“But despite that, in our lives today, there is very little space for meaningful self-expression; this feels like quite a serious thing, that people don’t have space in this way, busy with the fast pace of urban living or just trying to survive.”

With DUET, they aim to create an innovative branch of technology – one that offers that meaningful self-expression. Through our time with the app, we did get this sense of communication once we had a consistent partner. 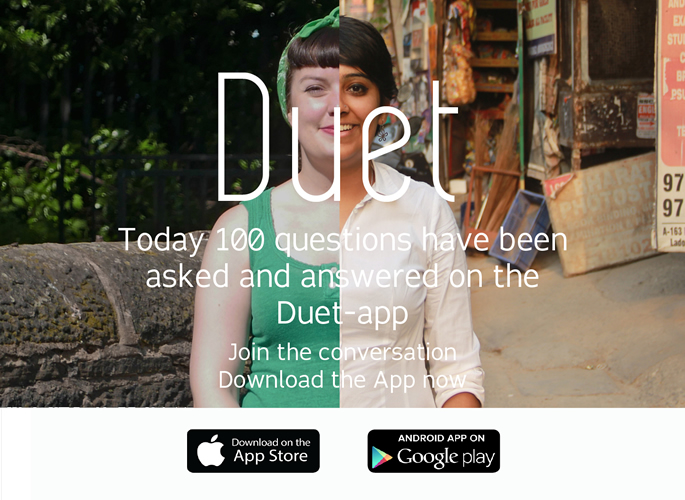 Over the days, we found we could create a profile of them within our mind; gradually building up day by day. We also found we became keen to learn more about our companion; interested to see their answer and the comparison to our own.

However, this sense of motivation only began once linked with another user. Prior, our motive for using DUET waned when our original partner didn’t answer.

Regarding the questions, the variety certainly felt refreshing to answer. However, while some were interesting, other questions (particularly those on social/topical issues) felt difficult to answer, dependent on the topic and whether we had time to answer them.

The experiment behind DUET lasts for one year, meaning it will end on 25th February 2018. However, Babitha tells us the app could be used again in the future, saying:

“However we are exploring how this platform could be relevant for other audiences as well in the future and we will explore other versions.” Quicksand and Invisible Flock look also set to continue in future joint ventures.

“We aren’t tied to the idea of apps. However we are sure we want to continue working together as Quicksand and Invisible Flock- this could be through other digital experiences, experiments etc. that are rooted in the lives of people- their hopes, aspirations, fears.”

Their maiden project of DUET feels like a revolutionary, game-changing step in technology and social media. With this unique way of connecting with others, sharing culture and experiences, could this become a new way of interaction?

It certainly feels so from our time with the app. We can’t wait to see what the genius minds of these two developers will bring in the future.

If you’re interested to join the conversation, make sure you download DUET from Google Play or the App Store. To learn more about the app, visit its website here.