Artists and painters have teamed together with local landlords to design bespoke Punjabi signs for Desi Pubs in the Black Country. DESIblitz has more.

"The symbols are designed to reflect the people frequenting the pubs"

Desi Pubs in the Black Country have been decorated with Punjabi-inspired pub signs for the first time ever.

Each pub sign uniquely characterises the diverse cultural traditions and pursuits of a number of Desi Pubs that have been around for the past 50 years or more.

The purpose of the project is to recognise and highlight the migration of Punjabi citizens into the region.

These were then recreated into signs by specialist pub sign painter Andrew Grundon.

The pubs involved include The Red Lion, which features a courageous lion statue complete with a red turban. Prince of Wales pub, features a sign titled ‘Tekha Sharaab Desi’ and reflects the passion and culture of Punjabi culture.

Red Cow is nicknamed ‘Gau Wallah Pub’, having been around since 1960. The sign reflects rural Punjab and highlights the migration of the Desi community to Smethwick.

The Sportsman pub features a ‘Kalahri’ as its sign. The pub is popular for its extensive sports coverage, particularly Indian cricket.

In a special Gupshup with DESIblitz, both Hardeep and Andrew discuss the creative process behind designing Punjabi Pub Signs for the Black Country.

Tell us about the inspiration behind designing the Pub signs. How did you get involved with the project? 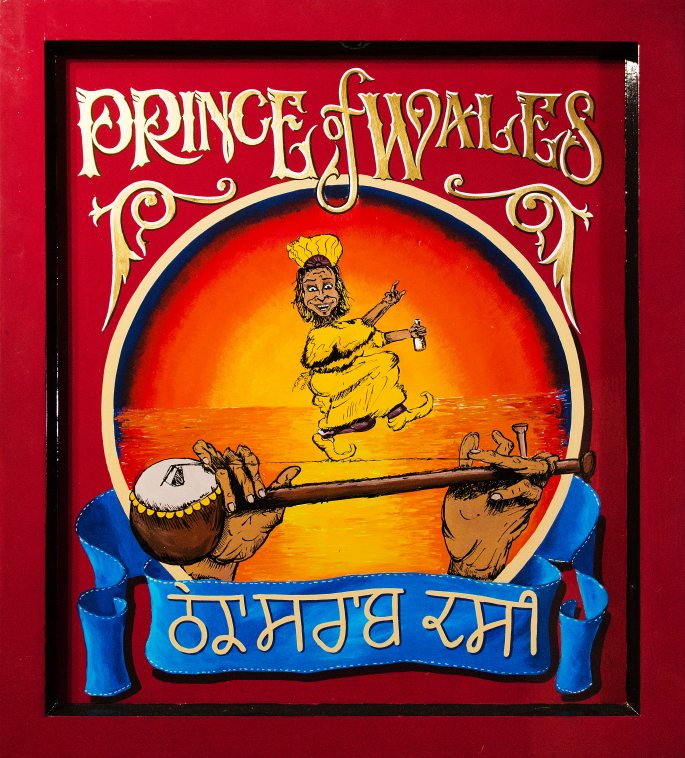 Hardeep: I was approached by Skinder from NAE [Nottingham’s New Art Exchange], who had seen my work before.

I was also familiar with Red Cow as I grew up around the area. Red Cow would often host parties and other important functions, helping to bind the people living in the area together.

I could never have imagined that pubs like Red Cow would end up becoming the inspiration behind such a visible art project. I naturally thought it would be interesting to see how this would develop.

Andrew: I was approached by Martin Cox, who had found articles in the National press on my business, Signature Signs.

Did you speak to any of the landlords and pub owners prior to starting your designs?

H: After speaking to a few landlords it became clear that my designs should celebrate Desi Pubs for what they are rather than comment or treat Desi Pubs as a sort of sociology experiment – though this distinction got blurred slightly in the process.

We (NAE) decided that I would I focus on creating a bold image for each one, and Andrew would mock up the fonts/texts.

This way we would be fusing two different styles together – my drawings broadly inspired by cartoons/caricature and Andrew’s highly skilled sign painting techniques.

Tell us about your design process. How do you go about creating a pub sign? 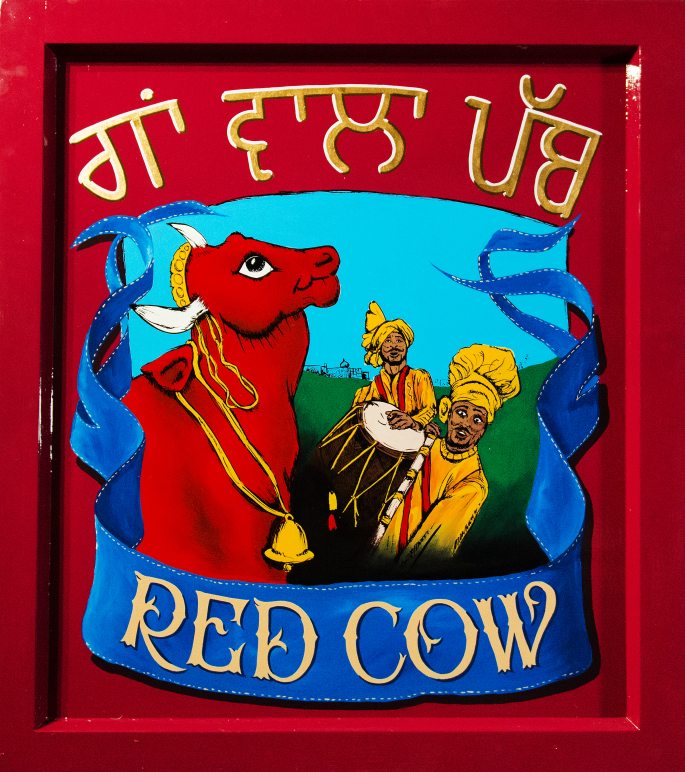 H: I used a pen tablet to digitally sketch out my designs. We referenced a variety of sources ranging from photos belonging to each landlord’s personal archive to results from Google image searches.

The designs would essentially illustrate Sooree’s poetic reflective texts that she had written after meeting each landlord and getting a feel for each pub.

Many of the signs depict symbols of courage, music, sport, culture and community – how well does this reflect the British Asians that are living in West Bromwich and the Midlands?

H: The symbols are designed to reflect the people frequenting the pubs (particularly British-Asian men) rather than whole British-Asian community.

Although religion plays such a huge part in the community, we avoided using any direct references to any religious imagery and instead tried to keep the iconic style associated with ritualistic art forms.

“That being said, I suppose they all symbolise forms of courage, which I think applies specifically to the history of migration and legacy of colonialism in the community.”

Andrew, how did you overcome the cultural differences of the designs? Was it a challenge for you to paint them? 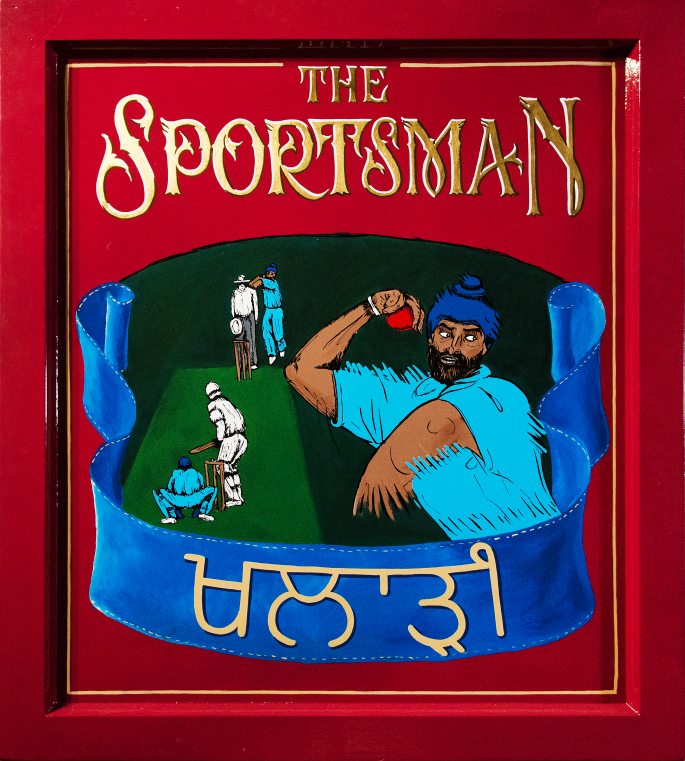 A: I adhered very closely to Hardeep’s concept designs, as my knowledge of the culture was very limited, and I wanted to be respectful.

It was a challenge, but I checked with the team at every stage to avoid any problems.

You’ve mentioned that you fused together the traditional British pub sign with the Punjabi designs, were you pleased with the end result?

A: The end result was quite unlike anything I’ve done before, and I’m pleased with how it worked. For an artist undertaking commission work, however, the main question is always: “Does the client like it?”

Tell us about your painting process, how long does it typically take you to complete a pub sign?

A: A pub sign can take a week, or 2 ,or 3… it’s entirely dependent on the intricacy of the design.

As a general rule, the longer I have to complete a sign, the better it will be, as the design can evolve at a thoughtful pace when you have time to think and evaluate how it might be improved.

How important is it to preserve the history of Punjabi migration in the region? 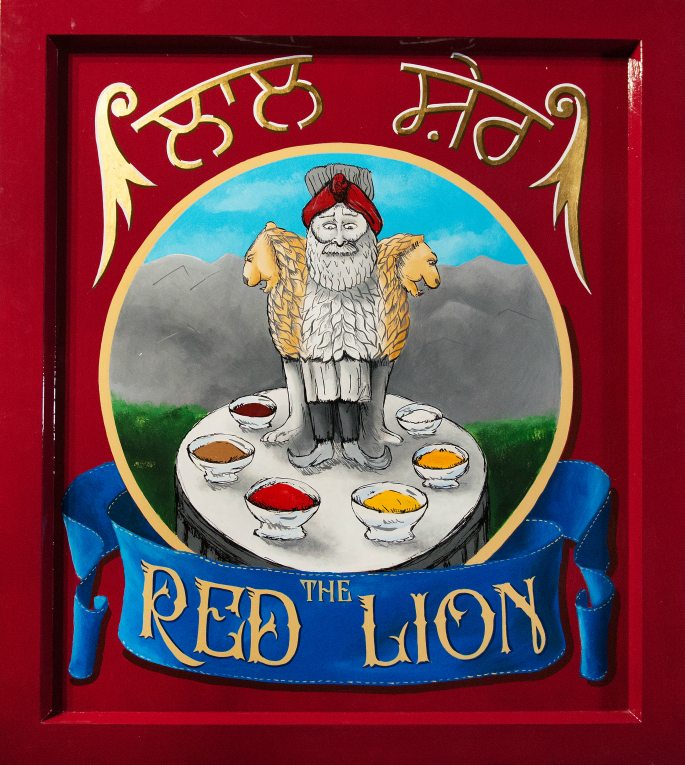 H: It’s very important, immigration’s been continually described as a key topic of debate in Britain throughout my entire lifetime.

There have been any concerns that the Desi pub trade has been struggling in today’s age. What do you think can be done to combat this?

H: I think projects like Desi Pubs can play a significant role in creating new visitors. It also hinges on the pub owners attitudes towards the role of art and other cultures in society.

Creative Black Country, have worked closely with Desi Pub landlords over the last 18 months on various initiatives to boost the struggling trade of pubs in the area.

Earlier in 2016, TV chef, Cyrus Todiwala also visited the Black Country pubs to talk about the remarkable impact they have had on previous generations of Desi communities.

In addition, to the pub signs, special stained glass windows have also been created by local artists.

The glass artwork hung at The Red Lion pays homage to the extraordinary Malcolm X and his visit to Smethwick to meet with the Indian Workers’ Association in the ’60s to discuss equal rights for ethnic communities.

Art enthusiasts will be be able to visit the Desi pubs mentioned above to see the Punjabi pub signs which have now been permanently installed across the Black Country.