Conservative Councillor Rosemary Carroll has been suspended further to an investigation for sharing a joke ‘comparing Asian people to dogs’ on Facebook.

Tory councillor Rosemary Carroll has been suspended for three months, for sharing a racist joke on social media which compared Asian people to dogs when it came to claiming benefits.

Carroll, councillor at Pendle Council in Lancashire, is suspended from August 4th, 2017, until November 4th, 2017, and has been sent on ‘diversity training’ which she needs to pass before being admitted back to the Conservative Party.

Rosemary Carroll, who was Mayor of Pendle in 2016, and now councillor of Earby Town, claimed she shared the post with the racist and offensive joke on Facebook by accident and tried to delete it. 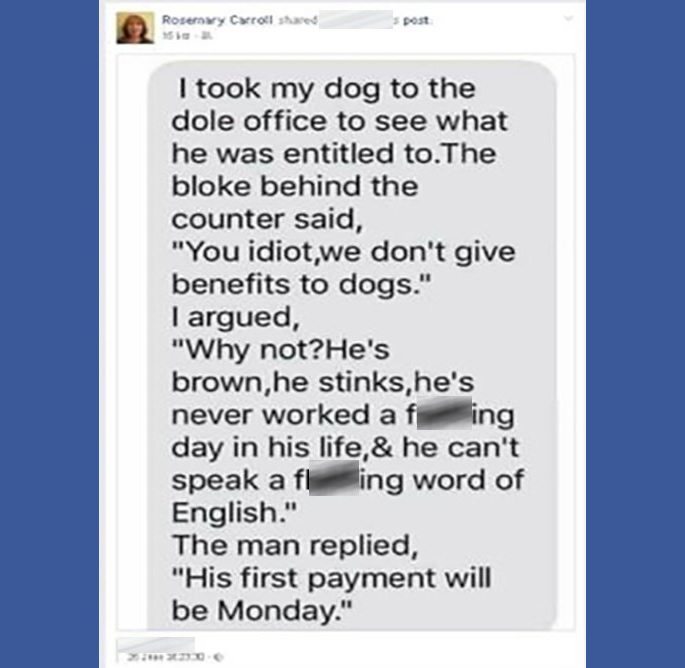 The Labour leader of Pendle Council, councillor, is asking for the resignation of Councillor Carroll. He feels this is the only resolution and has written protesting about the issue to Theresa May after being ‘extremely disappointed’ with the local Conservative Party branch.

Councillor Iqbal is baffled by what ‘diversity training’ involves and claims in ’10 out of 10 cases’ for this kind of misconduct would result in a dismissal and not a ‘slap on the wrist’.

An investigation of councillor Carroll’s conduct was discussed at a panel on 14th August, who decided that she should be given social media training and not be allowed to sit on committees for 12 months.

The Conservative Party in Pendle, following a meeting of the Conservative Association Executive, subsequently decided to suspend Carroll for the three months and the post was removed from her Facebook account.

Councillor Wayne Blackburn of the Labour Party said that her ‘excuses excuses [about deleting the post] were blatantly untrue and demonstrably inaccurate’ and requested her to be dismissed from Pendle Borough Council.

Following the investigation, Councillor Pauline McCormick, the chairman of Pendle Conservatives said in a statement:

“As an association we will not tolerate anything that brings the party into disrepute.”

After an earlier council investigation into the matter, Rosemary Carroll stated:

‘I am utterly disgusted with myself that I messed up and would like to apologise to anyone whose feelings I offended. I am not a racist and have never held racist views. At this moment I am not intending to resign from the council and hope this apology will suffice.’

The investigation also pointed out that Councillor Rosemary Carroll said that ‘if she was a so called racist she would never have gone to various Asian events during her time as Mayor’.

Going to events and attending Asian functions is not exactly a reason not to make any person less racist or how they view people of different races personally.

What is of real concern here is that a councillor with a public responsibility and liability would share such an offensive joke on her social media and claim it was an ‘accident’ and then have it removed further to being investigated.