A corrupt police officer from Essex who abused his position to help an organised criminal gang has received a prison sentence.

Mahmood "abused his position of power"

A corrupt police officer has been jailed for helping an organised criminal gang steal money from other criminals.

Kashif Mahmood, aged 32, of Harlow, Essex, seized hundreds of thousands of pounds for a gang controlled from Dubai.

Southwark Crown Court heard that he was a member of a “highly lucrative” operation which seized at least £850,000 from criminal couriers.

The former Met Police officer, who is a close friend of the Khan brothers, dressed in his uniform and used police cars to go to locations where he was told that “significant quantities of criminal cash” would be exchanged.

He seized the money for the gang while pretending to be doing his duties.

Mahmood was helped by Gherghel, who posed as a police officer twice.

The conspiracy was run by a man based in Dubai, who used an encrypted communications platform to communicate with Mohsin.

In July 2019 and January 2020, Mahmood looked up police records for intelligence on the Dubai contact, who was concerned about what police knew about him.

On one occasion, Mahmood and Gherghel searched an undercover surveillance car, stealing a bag with a large amount of cash.

Officers stopped Mahmood to ask why he had searched the car.

He claimed there were concerns of drug dealing in the area. Mahmood also agreed to complete an intelligence report.

On April 28, 2020, Mahmood and Gherghel were arrested at their homes.

Gherghel’s address was searched and police found a Met stab vest and £11,385 in cash.

On July 7, 2020, officers arrested the Khan brothers and Shah.

Evidence seized included £39,525 in cash, more than 20kg of cannabis, paraphernalia for packaging drugs and a box for an encrypted mobile phone. 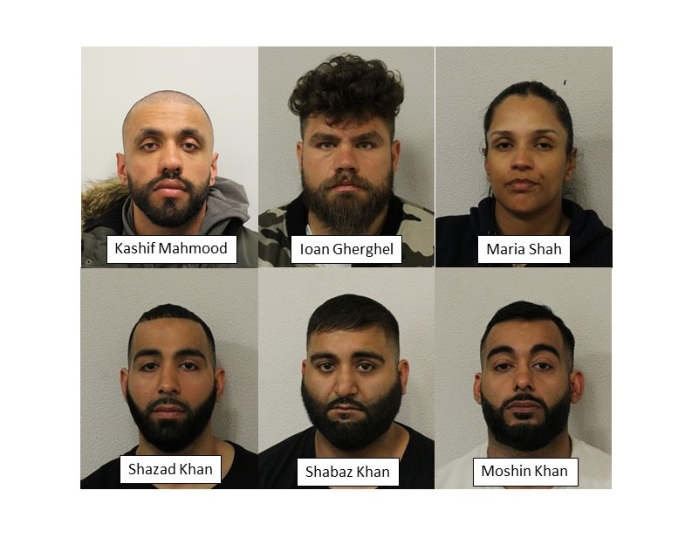 Mahmood admitted conspiracy to acquire criminal property and misconduct in public office, although he did not receive any additional jail time for the latter charge.

He stated that his actions were an “exploitation” of his policing colleagues.

Judge Tomlinson explained that the gang put criminal couriers in harm’s way, as they would not have been able to explain to their bosses how the money had been stolen.

“He accepts that this is no one’s fault but his own. It is his own fault he has lost his good character and his hard-earned reputation.”

Mahmood had achieved his “boyhood dream” of becoming a police officer, despite his “challenging” childhood during which he was stabbed when he refused to join a local gang.

He was sacked by the Met in November 2020 following a misconduct hearing.

Mr Emlyn Jones continued: “The punishment he has brought upon himself is substantial.

“It seems that in the end, his background has caught up with him.”

“He thought he had escaped but it called him back in.”

Mr Emlyn Jones said Mahmood’s remorse was “genuine”. He added that he did not take a cut of the money seized.

Mahmood was jailed for eight years.

Gherghel was jailed for six years for conspiracy to acquire criminal property.

The defendants were also banned from travelling outside of the UK for five years after their release.

“Mahmood may have been a police constable in name, but he was nothing more than a criminal who abused his position to look after the interests of organised crime.

“His motive, we have to assume, was money; he was paid handsomely for his endeavours.

“This investigation was undertaken by the Met’s Anti-Corruption Command, within the Directorate of Professional Standards, and directed by the Independent Office for Police Conduct.

“Fortunately cases as serious as Mahmood’s are rare, but they highlight how crucial the work of our Anti-Corruption Command is.

“There is absolutely no place for any corrupt officer within the Metropolitan Police Service and we have the largest dedicated counter-corruption unit within UK law enforcement.

“Investigating corruption can be incredibly challenging.

“Corrupt operators tend to have extensive knowledge of police tactics and some know how to use the judicial system to their advantage.

“It is testament to the dedication and professionalism of the Anti-Corruption Command that all defendants, in this case, pleaded guilty, in response to the weight and quality of evidence gathered.

“The fight against corruption is always present and we appeal for everyone to play their part, by remaining vigilant and reporting concerns to the police, the IOPC or Crimestoppers.”

Dhiren is a journalism graduate with a passion for gaming, watching films and sports. He also enjoys cooking from time to time. His motto is to “Live life one day at a time.”
UK Local Lockdowns for Covid-19 Indian Variant?
Indian Woman Molested by Hospital Staff while Husband Died