B&Q Lorry Driver banned after Smashing into a House

A lorry driver from the West Midlands has been banned from driving after he crashed his B&Q truck into a house in Harlow, Essex.

Singh had exceeded the maximum amount of hours

Lorry driver Navarain Singh has been banned from driving for six months after he crashed his B&Q HGV into a house in Harlow, Essex.

The 40-year-old from Tipton, West Midlands, was driving his Volvo truck along Elizabeth Way at around 3:20 am on December 17, 2019, when it left the road and smashed into a house in Canons Gate.

The resident David Hill woke to an almighty “thud” inside his home.

As he ran downstairs, he discovered that the huge lorry had crashed through the side of his house into his lounge.

The wall of the house where the lorry hit was next to where David’s children would usually be sleeping. Fortunately, no one was injured in the incident.

The crash left David and his wife Hannah without a home for Christmas.

Police arrived at the scene and Singh was arrested.

On November 5, 2020, Essex Police said that an investigation revealed that Singh had exceeded the maximum amount of hours lorry drivers are allowed to drive over a set period of time.

Officers also found that the lorry driver had failed to correctly fill in the tachograph record sheet which is used to show how many hours a driver has driven. 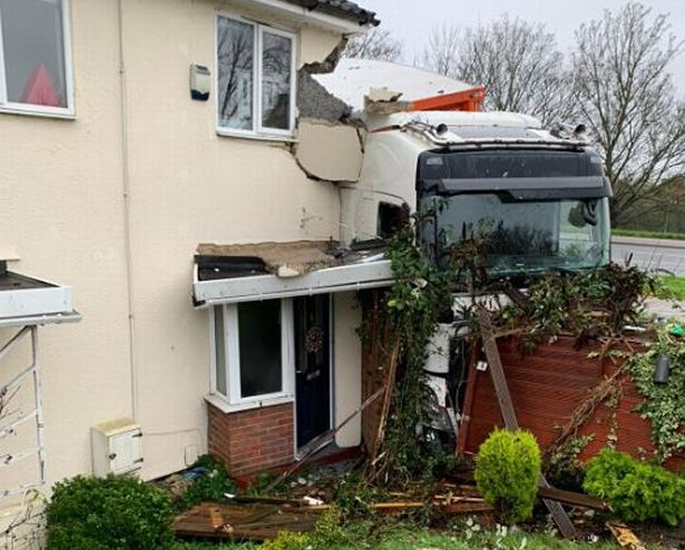 Singh was charged and later admitted one count of careless driving and 15 counts of failing to use a tachograph recording sheet.

On October 31, 2020, Singh appeared at Chelmsford Magistrates’ Court and was given nine points on his licence. He already had three points, therefore, he was banned for six months.

Motorists can be banned from driving if they already have 12 or more penalty points on their licence. A ban can last:

“This collision could very easily have ended in tragedy – either to Navarain Singh himself or someone inside the building he hit.”

“There are strict regulations which set out how many hours lorry drivers can drive over a set period of time and it is clear from our investigation that Singh had completely ignored these in the fortnight before the collision.

“It’s so important these regulations are adhered to because they’re there to keep people safe.

“I hope this acts as a reminder to all drivers about the need to stick to the rules of the road.”

Dhiren is a journalism graduate with a passion for gaming, watching films and sports. He also enjoys cooking from time to time. His motto is to “Live life one day at a time.”
US Indian Woman spits at Officer at Anti-Trump Protest
Indian Man aged 92 kills Wife aged 90 over Pension Dispute