It has been reported that Bhangra singer Balwinder Safri has passed away at the age of 63 following a bout with ill health.

he has now passed away after being readmitted to hospital.

Legendary Bhangra singer Balwinder Safri has reportedly passed away at the age of 63.

The singer had been fighting an extensive health battle.

Balwinder was admitted to hospital on April 20, 2022, following concerns about his heart.

Two days later, he underwent a planned triple heart bypass, however, he suffered complications and was taken back in for further surgery.

Balwinder ended up suffering brain damage and was placed in a coma.

He remained in a coma for four weeks and his family were told to prepare for the worst.

At the time, his step-daughter Priya Kumari said doctors at Wolverhampton’s New Cross Hospital wanted to stop dialysis, but his loved ones wanted to give him more time.

She had said: “He had to go in for a triple bypass which was planned and it was successful at New Cross Hospital.

“He was admitted two days before as he was getting pains.

“Later on in a CT scan it showed my dad had significant brain damage. On the third week he started to open his eyes, there are little movements when we’re talking to him.

“He’s been on a dialysis machine four days on four days off. It’s horrible, now they’re saying they don’t think he’s going to wake up, but we have hope he is there. We want to give him time.”

But Balwinder Safri battled on and woke from his coma.

Earlier in July 2022, he was discharged from hospital and would continue his recovery at a rehabilitation centre.

His wife of 17 years, Nikki Davitt, had said:

“It’s a miracle. There are no other words to describe it.

“There were so many times when we thought ‘this is it’.

“I remember a call from critical care one night and they asked me to come to the hospital as soon as I could as they didn’t think Safri was going to make it through the night, but he always pulled through.

“He is incredible – I always knew he was strong, he had a stroke back in 2000 and they thought he would struggle to walk again, however he pushed and pushed himself to walk around his hospital bed and went on to make a full recovery.”

However, it has sadly been reported that he has now passed away after being readmitted to hospital.

Fans were devastated by the news and took to social media to pay their respects.

*The Birmingham-based artist has been part of the UK Bhangra scene since the 1980s.

Balwinder Safri in his younger days was a passionate singer in Punjab. The son of a raagi (religious singer), from the village of Beleran, Safri enjoyed the art of singing and frequently sang songs live at the Jalandhar radio station.

In the late 1970s, he arrived in the UK further to an arranged marriage. He lived in Birmingham and started to work as a tailor.

Eventually, he wanted to pursue his first love. Singing and was then introduced to the Bhangra band Azaad. In those days, Bhangra was still transforming into a genre of music and Hindi songs were popular.

Safri performed hit Bollywood songs like Narinder Chanchal’s Beshak Mandi Masjid Tado from the film Bobby (1973) and many others that made him a hit with audiences at university shows and functions.

In the early 1980s, Safri left Azaad to pursue his solo singing career.

Safri performed with the Punjabi group called Ashoka. With whom he recorded and performed many songs, including Chota Ishq Diya which he recorded later in his blockbuster album Get Real.

Years later, when Bhangra music was alive and kicking in the UK, around 1990, he was introduced to Deepak Khazanchi and released his album called Reflections on Khazanchi’s label Arishma Records.

With Bhangra music in huge demand, Safri’s singing career began to take shape. He then formed his band called the Safri Boys with young musicians from Birmingham.

At this point, he recorded what was known to be the first ever and biggest selling Bhangra single, called Legends, featuring the massive hit, Par Linghade.

The single and subsequent albums such as Bomb The Tumbi, Another Fine Mess and songs such as Putt Sardara De from Death Jamm, gave Safri meteoric rise and the band Safri Boys became a household name. 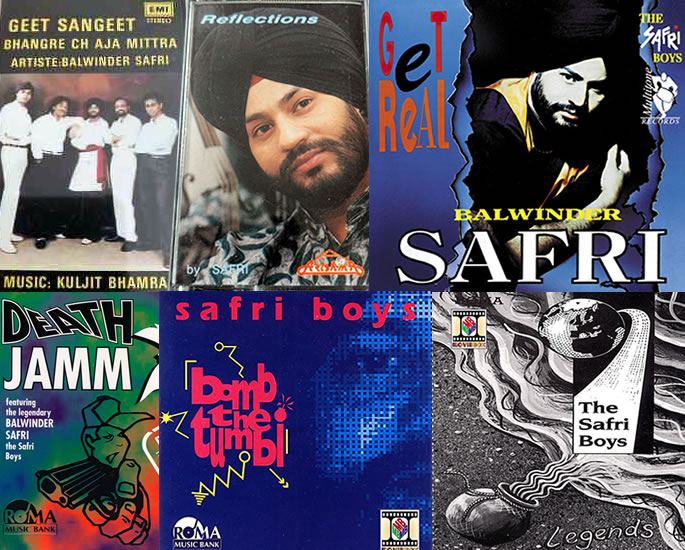 In 1994, he released what became probably his biggest and record-breaking album, Get Real.

Produced with music that catapulted him into fame for different singing styles and smash-hit songs like Chan Mere Makhna, Dil Te Allana Pyeah, Rahaye Rahaye and Peen De Sakhi, the album was in the Bhangra charts for over 10 weeks at the number one spot.

Safri enjoyed immense stardom and popularity during this period. He was booked at endless shows, weddings and worldwide tours. Popular Punjabi singer Satinder Sartaaj revealed in an interview that he used to dance to Safri’s Rahaye Rahaye during his college days.

Safri recorded over 15 Bhangra and Punjabi albums and was always willing to show his passion for his love of singing, despite suffering from illness in later years.

Balwinder Safri’s songs became evergreen hits for Bhangra lovers everywhere and instantly filled dance floors, and to this day his songs are continuously played by DJs and radio stations globally.

Safri’s vocal style and ability to sing so incredibly well will always be remembered and his legacy in the Bhangra and Punjabi music industry will be one that will shine in the Punjabi singer’s hall of fame.

* With input from Bhangra fans