Goldy Brar has stated that eight shooters were involved in Sidhu Moosewala’s murder and replies to reports of the assailants not being paid.

"There was talk of giving us lakhs of rupees."

Canadian-based gangster and main conspirator in the killing of Sidhu Moosewala has come out and stated there were eight shooters involved in the murder.

In a message posted on social media, Brar claims eight sharpshooters were enlisted.

This comes in the aftermath of the police’s killing of Jagroop Singh Rupa and Manpreet Mannu, two of the confirmed gangsters in Sidhu’s assassination.

However, Punjab officials have claimed there were only six men involved, even though the Delhi Police identified eight people in their initial investigation.

However, Bholu, Banonda, Jadhav, Mahakal and Ranu all received a clean chit from the Punjab, Delhi and Maharashtra police.

Instead, the names of Ankit Sersa, Deepak Mundi and Kashish, alias Kuldeep, were included on the six-shooter list.

Police official, Mansa SSP Gaurav Toora, said that Brar is trying to distract the people and divert their attention.

When asked about Goldy Brar’s claims, he said they were “absurd statements”. 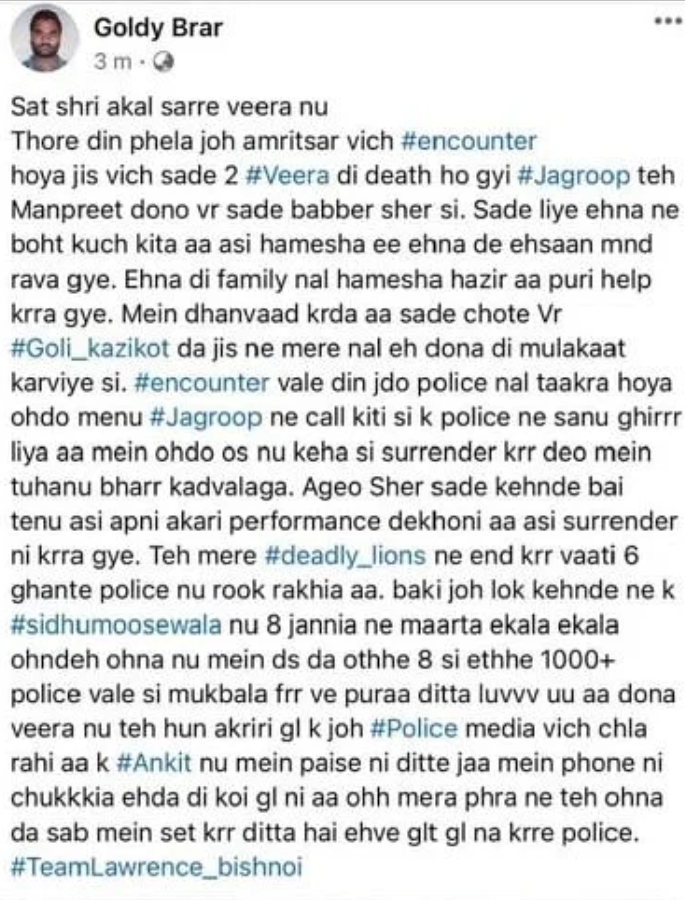 Further revelations have also stated that Goldy Brar cheated the accused by not paying them the full money for the killing.

Apparently, the gangster took advantage of the shooters’ drug addictions and manipulated them into murdering Sidhu Moosewala without proper payment.

Whilst being interrogated, Priyavarat Fauji disclosed:

“There was talk of giving us lakhs of rupees.”

However, after the killing, Fauji claims he and the other assailants lost contact with Goldy Brar.

But, in Goldy Brar’s Facebook post that detailed the police encounter and reports of unpaid money, he said:

“They all are my brothers and I have already arranged everything for them.”

He goes on to detail that he has compensated the families of Jagroop Singh Rupa and Manpreet Mannu for their bravery.

Brar further said that there are accusations of him not picking up calls from Ankit Sersa and he has not been paid.

But, he expressed that these reports are false and people should stop spreading these lies.

Although, it seems as though an initial deal of up to 10 crore was agreed upon between Brar and the shooters that have not yet been fulfilled.

Interpol has issued a red notice for Goldy Brar and he remains the top target for the Punjab police.

Balraj is a spirited Creative Writing MA graduate. He loves open discussions and his passions are fitness, music, fashion, and poetry. One of his favourite quotes is “One day or day one. You decide.”
Bhangra Star Balwinder Safri passes away at 63
Redhanded on Rock Music & Debut Album ‘Retrograde’