After the shocking killing of Punjabi singer Sidhu Moose Wala, responsibility for his murder has been claimed by rival gangsters.

"So, today we got our justice"

Further to the shocking daylight shooting and murder of singer turned politician Sidhu Moose Wala in his SUV on Sunday, May 29, 2022, at about 5.30 pm IST, the killing is being reported as gang based rivalry.

27-year-old, Sidhu Moose Wala was driving the black Mahindra SUV when a spray of bullets was fired by assailants in two to three vehicles following him.

Two other people were in the black SUV with Moose Wala at the time and were injured by the gunfire.

Sidhu Moose Wala was pronounced dead on arrival at the civil hospital in Mansa.

Goldy Brar, a Punjabi gangster, based in Canada, posted a message on social media claiming responsibility for the shooting along with Sachin Bishnoi Dhattranwai and the Lawrence Bishnoi gang.

A second message was then posted on the Facebook account of gangster Lawrence Bishnoi reaffirming their collaborative involvement and act of revenge.

In his message, he states that Sidhu Moose Wala was a conspirator behind the deaths of three of their brothers. He wrote:

“Ram Ram to all my brothers and Sat Shri Akaal.

“He (Sidhu Moose Wala) was named in the murder of our brother Vicky Middukhehra and Gurlal Brar but the police took no action against him.

“And his name also was behind the encounter (assassination) of their our Ankit Bhadu. He was working against us.

“Despite Delhi police forwarding his name in the media but he survived by abusing his power and no action was taken against him.

“Kaushal’s men who were captured, they named him too.” 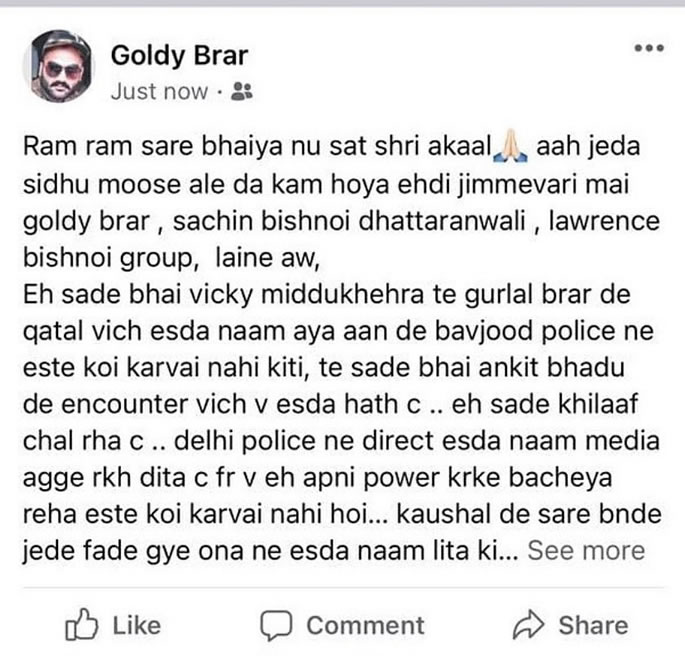 A second message was then uploaded on Facebook under an account managed by the Lawrence Bishnoi group confirming their responsibility for the killing of Sidhu Moose Wala. 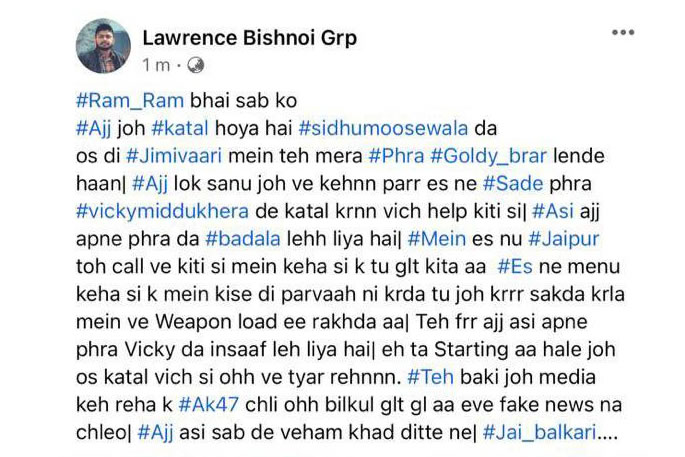 The gangster Lawrence Bishnoi is currently serving a prison sentence in Jaipur, Rajasthan. The message comes from him saying that the killing was an act to avenge the death of their brother Vicky Middukhera.

He says he called Sidhu Moose Wala from Jaipur and told him what he did was wrong and adds: “He replied to me ‘I am not scared of anyone I have my weapon loaded also’. So, today we got our justice”.

He adds: “This is just the ‘Starting’ and that others involved in the murder need to be ready. Also, the reports of an #Ak47 being used are wrong. Don’t spread fake news. Today we have quashed everyone’s doubts.”

Goldy Brar otherwise known as Satinder Singh, is said to be the mastermind behind the killing of youth Congress pioneer, Gurlal Singh Pehalwan, in Faridkot in February 2021. A non-bailable arrest warrant was issued against him by a Faridkot court in Punjab, in March 2021.

In a press conference held by the Director of General Police (DGP) V. K. Bhawra, more information was released. the DGP said:

“This incident looks like an inter-gang rivalry case. Because one of his managers, Shaganpreet, his name has been linked to the killing of Vicky Middukhera. “He (Shaganpreet) has left the country for Australia.

“Therefore, this reaction is that from the Lawrence Bishnoi gang. And the responsibility for the killing has been taken by his gang.”

DGP Bhawar also elaborated on the issue of security related to Sidhu Moose Wala. He said:

“Usually there are four commandos who act as fool-proof state security. However, in this case, two of them were withdrawn.

“He [Sidhu Moose Wala] had two commandos still available to him. However, when he went on this trip, he did not take them with him. He left them at home and told them you do not need to come with me.

“He also had a private bullet-proof vehicle (Toyota Fortuner) but he did not take that either.

“The case is now open for investigation and a Special Investigation Team (SIT) will be assigned.

“At this moment, from the approximately 30 empty bullet cartridges recovered from the crime scene, we found 9mm and 455 bore shots fired from three weapons.

“SSP Mansa and SSP Bathinda have been assigned and investigations will continue across the region.”

Some suspects in Bathinda over their alleged links with Goldy Brar and the Lawrence Bishnoi gang for their possible involvement in Moose Wala’s murder.

Police say they have also contacted Vancouver and Toronto police in Canada for waiting for their reply on Goldy Brar’s association in this Sidhu Moose Wala murder case.

While, responsibility has been claimed by Goldy Brar and Lawrence Bishnoi for the murder of Sidhu Moose Wala, the actual assailants who opened fire on him while driving, remain key targets for the police investigation.

Amit enjoys creative challenges and uses writing as a tool for revelation. He has major interest in news, current affairs, trends and cinema. He likes the quote: "Nothing in fine print is ever good news."
Sidhu Moose Wala Shot Dead in Punjab
Mika Singh shares Grief over Sidhu Moose Wala’s Death