Bollywood stars have reacted to the mass molestation that took place in Bangalore on New Year’s Eve. Women were reported to have been very angry.

The whole of Bollywood seemed to have woken up after Kumar’s video went viral.

Stars of Bollywood and others in the industry took to twitter to vent their frustrations over the mass molestation in Bangalore on New Year’s Eve.

Actor Akshay Kumar was one of the first stars to comment on the incidents. The 49-year-old father released a video, which has since gone viral. He said:

“Today I am feeling ashamed of being a human…I have lost my temper. Even if I was not the father of a daughter. I will say that a society which can’t respect its women, has no right to call itself a human society.”

The backlash by Bollywood comes after women celebrating the New Year were attacked by a flash mob of molesters in Bangalore.

“In these modern times, the more skin women show, the more fashionable they are considered.” Whilst Karnataka remarked: “These kind of things do happen.”

Kumar ranted in his video, referring to these comments, saying: “It’s not the girl’s clothes, it’s your mentality that is short.”

The Bangalore incident makes me feel we r evolving backwards,from humans to animals,rather beasts coz even animals are better!Truly shameful pic.twitter.com/FJwJ80Mkby

Respect!!??
All girls MUST learn some form of self defence! Be strong, Be independent! https://t.co/JofQZII4L2

Fellow actor, Arjun Kapoor agreed with Kumar. He said: “He’s spoken what’s on everyone’s mind. Bangalore is just one of the many incidents that happen every day and yet nothings been done about it.”

Veteran filmmaker Shekhar Kapoor was not at all impressed with Indian society and took to Twitter to express his feelings:

When will it stop? How long will our society go on blaming women for assaults upon them? #Bengalurushame

The whole of Bollywood seemed to have woken up after Kumar’s video went viral. Kumar has been getting various support from fellow film stars, with Alia Bhatt branding the incident as: “Disgusting.”

On Azmi’s comment, Shabana Azmi responded by saying: “Abu Azmi’s misogynistic remarks are a blot on our culture. Blaming the victim, not the perpetrator is almost as heinous as the crime itself.” 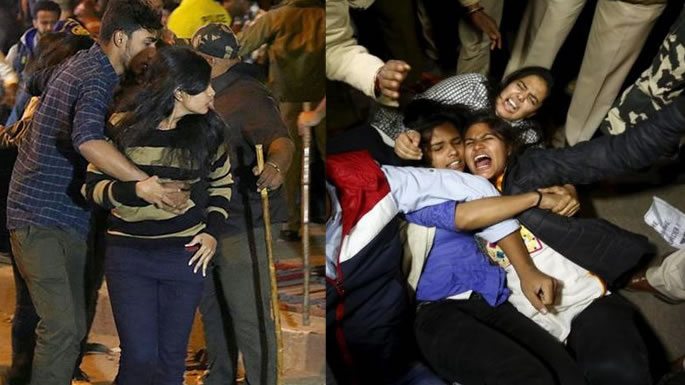 It has been reported that the incidents have been happening in Bangalore almost every New Year’s Eve in the past. It is only now that it is being known to the wider public outside of India.

Varun Dhawan made a very simple statement. He said: “Women can wear what they want. It’s their choice.”

Actress Swara Bhaskar blamed the parents of the individuals who molested their victims. She said: “There is a problem with Indian parenting. Let’s wake up to it and change it.”

In addition, Indian Cricketer, Virat Kohli, condemned the molestation of the girls on a social media video too.

A day after the attacks, a video was sent to the police. Reportedly, six people have been detained in their connection to the mob that committed this atrocious act.

Alima is a free-spirited writer, aspiring novelist and insanely weird Lewis Hamilton fan. She's a Shakespeare enthusiast, with a view: "If it were easy, everyone would do it." (Loki)
A Tribute to the Legendary Om Puri
Shahid Kapoor’s Most Impressive Film Roles