An Indian mother from Punjab and her daughter were brutally beaten. It was heard they were assaulted for resisting molestation.

A shocking incident has emerged where an Indian mother and her daughter were beaten for resisting molestation.

The violent attack happened in the city of Jalandhar, Punjab, during the evening of October 31, 2019.

CCTV cameras captured the mother and daughter being beaten with a stick and dragged along the ground by a man and several women.

Police officers have said they have received complaints from both victims as well as those who were responsible for the attack.

SHO Sukhdev Singh explained that a cross-case was registered.

Police officers have said that the woman and her daughter were beaten for resisting molestation.

The 58-second CCTV footage was noticed by the police and it showed a man and woman grabbing the victims in an alleyway before two more women arrive.

They are seen kicking and slapping the victims while tearing at their clothes. The male attacker is seen in the video grabbing a stick and hitting the daughter on the back with it as she tries to crawl to safety.

One of the female attackers then drags the girl by her hair and hits her several times in the face before she briefly collapses.

During the violent attack on the Indian mother and daughter, two men witness the ordeal and try to help the victims.

Both men try to pull the attackers off the mother and daughter but they continue to rip at their clothes. 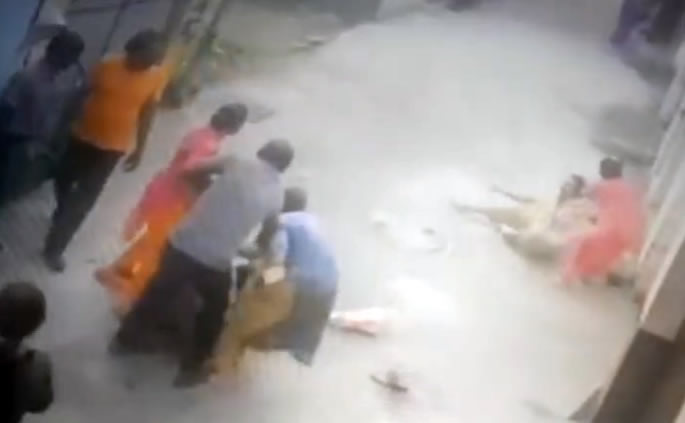 The witnesses continue to try and prevent the victims from being badly hurt which eventually leads to the suspects leaving the scene.

The mother soon gets up and goes to check on her daughter with the two men.

Reports of the attack and the video came to the attention of the police.

Officers revealed that a young man had molested the young woman but she and her mother resisted.

This prompted the man to call three women and the four of them beat up the mother and daughter.

According to SHO Singh, the victims and attackers knew each other as there had been a dispute between their families in the past.

A cross-case under Section 323 (voluntarily causing hurt) of the Indian Penal Code was registered and action will be taken. SHO Singh stated that the accused will not be spared.

Further action was taken on November 4, 2019, but SHO Singh said that those accused of committing Section 323 can be bailed.

Currently, no arrests have been made.

Dhiren is a journalism graduate with a passion for gaming, watching films and sports. He also enjoys cooking from time to time. His motto is to “Live life one day at a time.”
Pakistani Student sues UK University for ‘Third-Class Degree’
Rapist jailed for attacking his Victim in Her Home for 2 Hours