"Lagaan put us on the map"

Celebrating his illustrious film career, the director spoke at length about his journey, from acting to filmmaking, as well as showing his favourite clips from some of his most highly acclaimed films.

Ashutosh is a name well-known in the film industry. He is responsible for iconic films such as Lagaan, Jodhaa Akbar, and for opening the doors of Hindi cinema to the West. However, his journey to this point was one of uncertainty and continual experimentation.

In the early days, Ashutosh describes himself as being “directionless, aimless and curious”. He tells the BFI audience:

“I found myself auditioning in every aspect of extracurricular activities – folk dancing, acting, singing. It was a completely new world for me when I first entered the stage. I was not used to the attention but I realised that was one of the reasons why I wanted to do it.”

Ashutosh took every opportunity that came his way in theatre and even acted in Hindi, Gujarati and Marathi. From this, he entered the world of Hindi cinema through Ketan Mehta’s Holi in 1984. 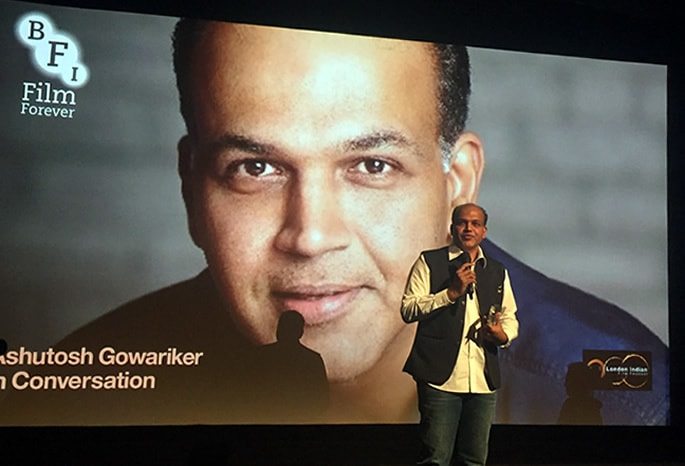 His acting career spanned numerous years including films and TV series like Circus and CID. Ashutosh’s most recent acting stint was playing the lead role in the national award-winning Marathi film, Ventilator, in 2016. Interestingly, this was produced by Priyanka Chopra – whom Ashutosh had previously directed in What’s Your Rashee?.

Shortly after acting, in 1993, Ashutosh forayed into the path of direction, which he considered distinct from acting but also one that he had learned a lot from:

“From my experience with different directors, whether it was Mr Kundan Shah or Mahesh Bhatt, meant that I adjusted to how they wanted me to portray the character. Every director’s style is different and I guess likewise with actors. You have to adjust with the different actors and their experiences.

“When I became the director, everyone says you tell us what to do and that’s a frightening thing and they expect you to do some magic and convey to them what is required from a shot.

Interestingly, Ashutosh was not part of any acting or film school but he did admit that he would ideally have wanted to have a qualification: “You are surrounded by people on the set who all have a qualification and having that education is really important.”

Pehla Nasha was Ashutosh’s directorial debut, where the name represented how he thought directing became his first obsession. Though the film was not a success at the box office, it helped Ashutosh find firm ground as a director. 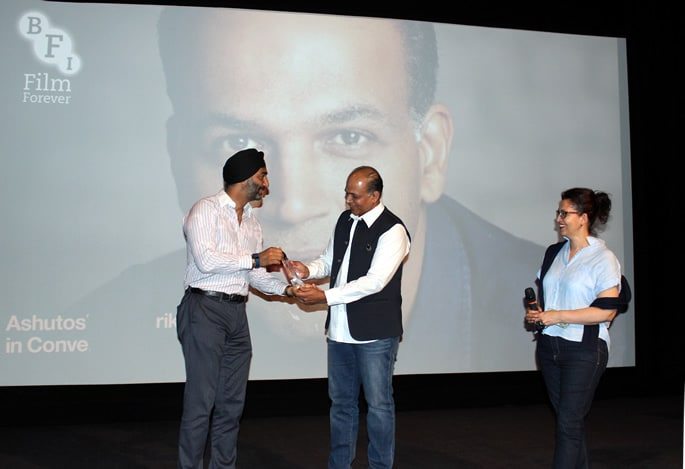 Very early on in his directorial career, Ashutosh Gowariker worked with both Aamir Khan (Baazi) and Shahrukh Khan (Swades). He also became one of the rare directors to bring the two actors together in the same frame in his debut film, Pehla Nasha. He explained how his association with the Khans goes far back:

“I knew them at a time when even they did not know how things are going to shape up. My question to Aamir was that why are you doing Holi when you’ll get launched by his own production? I knew Aamir at a time when Qayamat Se Qayamat Tak was make or break for him.

“Directing him in films came in later – first was just about struggling together to get into movies. However, having them as my actors meant that there was a certain level of familiarity.”

Ashutosh directed Lagaan in 2001. It would later be remembered in history as one of the most notable films of that decade and indeed of Ashutosh’s career. Ashutosh veered away from the norms of a mainstream film – whether it was through the dialect, the rural India setting or the inclusion of a British cast. Lagaan became the second Indian film, after Mother India, to ever be nominated for an Academy Award in the Best Film in a Foreign Language category.

Ashutosh admits that while the journey of Lagaan going to the Oscars was not easy, it was one that definitely paid off:

“We were already content with its box office success but when it got sent as India’s entry there was a new emotion attached with it. 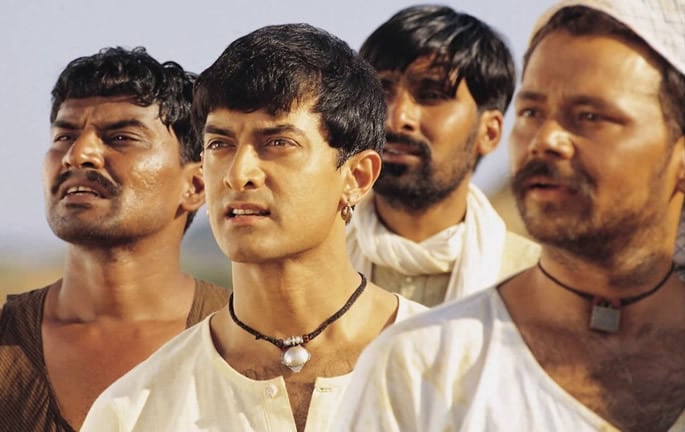 “Aamir and I went to LA without any support or prior knowledge, but our aim was to tell as many people as possible about Lagaan and get them to come to see the film. We actually used to sing, ‘Do Bachare Bina Sahare’ every morning when we were going out to do this mission!”

“We had to have 3 screenings from our side precede the 3 screenings the academy keeps. Our task was to create a buzz before the Academy screenings. They started with 3 people to 17 people to a full house (120) of the theatre for these screenings, which led to the nomination. This showed that the buzz had been created and securing that nomination was a great achievement.”

“Lagaan put us on the map. It opened up the market in countries like France, Germany.

“So many writers also started to think of out of the box ideas and before we had a herd mentality in that if something works, everyone wants to do the same. Now they all wanted to try something new and Lagaan helped in that sense.”

Ashutosh Gowariker avoided cutting down the film too much for the Oscars because he found that the speciality of Lagaan lied in it being a multi-genre film.

Jodhaa Akbar is another film which brought new heights of success for Ashutosh Gowarikar. The historical drama brought together two of the most respected actors, Hrithik Roshan and Aishwarya Rai Bachchan in an epic 16th-century romance.

The film went on to win several accolades at international film festivals as well as prestigious awards in India. This period drama was also screened at LIFF this year with a special introduction from Ashutosh himself. 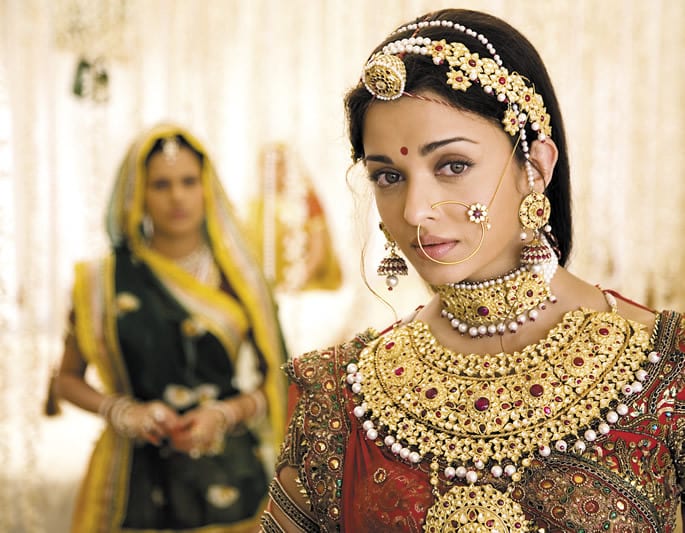 Ashutosh Gowariker reveals at BFI that whilst the reference for the audience for Jodhaa Akbar may have been the epic historical drama, Mughal-e-Azam, the thought of Mughal-e-Azam never came to his mind:

“The starting point for this story was about religious tolerance and how we need to respect each other’s cultures. However, I was not able to give it a focus which was different in nature at first.”

“However, I was later asked, how come, in Mughal-e-Azam, why do we see shots of Akbar at Janmashtami? This set me thinking and how him being there with Jodhaa showed respect and being in sync with her culture and religion.”

After Jodhaa Akbar, Ashutosh Gowariker has gone on to direct a number of other films – both diverse in genre and in their storylines. This includes What’s Your Raashee?, Khelein Hum Jee Jaan Se and Mohenjo Daro. The latter of which marked his fifth soundtrack association with the musical maestro, A. R. Rahman.

He also directed TV show Everest which was aired on Star Plus.

Ashutosh Gowariker is an Indian filmmaker who, through his creative storytelling, has changed Western perceptions of Hindi cinema. It was a fantastic evening at the London Indian Film Festival celebrating Ashutosh Gowariker’s acting and directorial career. It was an even greater treat for audiences to also have an opportunity to watch Jodhaa Akbar once again on the big screen!

Sonika is a full-time medical student, Bollywood enthusiast and lover of life. Her passions are dancing, travelling, radio presenting, writing, fashion and socialising! “Life isn’t measured by the number of breaths taken but by moments that take our breath away.”
London Indian Film Festival 2017 Opening Night
Salman Khan’s Tubelight sparks Hope and Belief