Arnab Goswami has been granted interim bail by the Indian Supreme Court, on the grounds of personal liberty being curtailed.

"The power to re-investigation has been wrongly used"

Republic TV’s Arnab Goswami got released from Taloja jail on November 11, 2020, after he was granted interim bail by the Indian Supreme Court in a 2018 abetment to suicide case.

Arnab Goswami and two others, Feroz Mohammad Shaikh and Neetish Sarda were arrested on November 4, 2020, for allegedly abetting the suicide of 53-year-old interior designer Anvay Naik and his mother Kumud in 2018.

The Supreme Court ordered the release of Arnab Goswami and other co-accused on interim bail on a bond of Rs 50,000 each.

Senior lawyer Harish Salve, who was representing Arnab Goswami, argued that the power to re-investigate was being wrongly used.

“We are well past the FIR stage. The FIR was lodged on May 5, 2018, and after this matter was investigated. The Power to re-investigation has been wrongly used”, he said.

His argument came in the backdrop of Maharashtra home minister Anil Deshmukh ordering a re-investigation on the basis of a fresh complaint by the family of Anvay Naik, who along with his mother Kumud, committed suicide in May 2018. 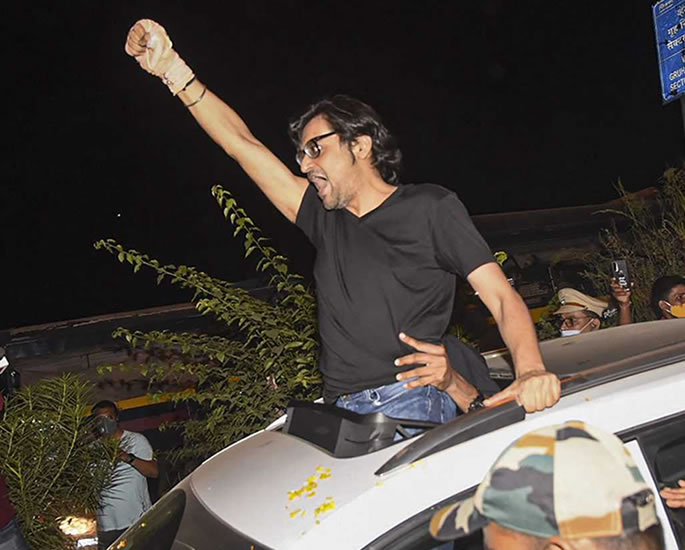 According to the Mumbai police, Anvay Naik, who designed the sets of Republic TV, had left a suicide note blaming Arnab  Goswami and two others for dues he alleged had not been paid to him.

The case was closed two years ago, with the police citing lack of evidence. It was reopened recently on the request of Mr Naik’s family, the police said.

In court, the police and the Maharashtra government said it was the duty of the state to protect the victim (Naiks).

The Supreme Court questioned whether not paying up money amounted to abetting suicide and asked:

“If tomorrow, a person commits suicide in Maharashtra and blames the government, then will the Chief Minister be arrested?”

Justice Chandrachud said governments should “ignore taunts on TV” as our democracy is “extraordinarily resilient”, referring to Arnab Goswami’s criticism of the Maharashtra government.

The bench of Justices DY Chandrachud and Indira Banerjee expressed concern over state governments targeting “individuals on the basis of ideology, difference of opinion” and said that they must realise there is an apex court to protect the liberty of citizens.

“Whatever be his ideology, least I don’t even watch his channel but if in this case constitutional court’s do not interfere today, we are travelling the path of destruction undeniably, the point is can you deny personal liberty of a person on these allegations”.

Arnab Goswami’s advocate Harish Salve said that Maharashtra Police seeking custodial interrogation of Arnab Goswami was nothing but a smokescreen to teach him a lesson.

“Allegation (against Arnab Goswami) is about withholding money which can be ascertained from documents. What’s the need for custodial interrogation? It’s just a smokescreen to teach the man a lesson,” Salve said.

The top court said the Bombay High Court was in error in rejecting the application for grant of interim bail on November 9.

“We must send a message today to the High Courts as well. Please exercise your jurisdiction to uphold personal liberty.”

Akanksha is a media graduate, currently pursuing a postgraduate in Journalism. Her passions include current affairs and trends, TV and films, as well as travelling. Her life motto is 'Better an oops than a what if'.
5 Indian Bold & Sexy Web Series on Amazon Prime Video
Actor Asif Basra dies in Reported Suicide