Are Ethnic Minorities more at Risk from Coronavirus?

Coronavirus can affect anyone, however, a report has suggested that ethnic minorities are more likely to be badly affected.

“This is a signal and it needs to be looked at more carefully."

Statistics into the first patients critically ill with Coronavirus in UK hospitals indicate that some communities are more affected than others.

The Intensive Care National Audit and Research Centre (ICNARC) found that black and Asian people are more likely to be badly affected than white people.

Based on 2,000 patients from 286 intensive care units across England, Wales and Northern Ireland, 35% are from ethnic minority backgrounds, nearly triple the 13% proportion in the UK population as a whole.

Fourteen per cent of those with the most serious cases were Asian and the same proportion were black.

This has led to calls for further research to understand why Coronavirus appears to be having a disproportionate impact on ethnic minorities.

Professor Kamlesh Khunti is from the University of Leicester and the Centre for BME Health. He told the BBC:

“A lot of people have been concerned about this issue based on anecdotal reports and now this data is showing a signal regarding a higher number of black and minority ethnic populations being admitted to intensive care units.”

He stated that while the data is the first step in understanding the issue, more research and analysis is needed.

The study is believed to be the first analysis of its kind anywhere in the world.

The median age of those in a critical condition of all ethnicities was 61 and that almost 75% were men.

Professor Khunti explained that there are numerous factors that could be the reason for more ethnic minorities being affected by Coronavirus. He told The Guardian:

“This is a signal and it needs to be looked at more carefully.

“For example, South Asians live in more deprived areas and have more cardiovascular disease and diabetes.”

He went on to say that South Asian people tend to live in larger, multi-generational households and so “social isolation may not be as prevalent”. 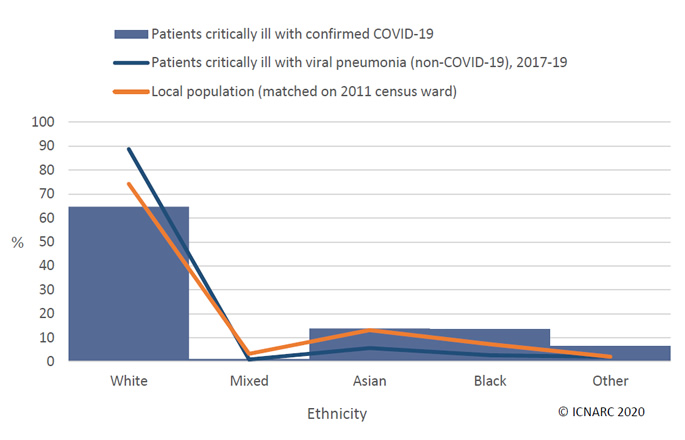 Government figures revealed that 30% of UK Bangladeshis are considered to live in overcrowded housing compared to 2% of white British people.

Fifteen per cent of black Africans also live in overcrowded conditions, as well as 16% of Pakistanis.

“We need to ensure that every individual, including the BAME population, are following social distancing instructions.

“We have anecdotal information that it might not be happening in certain BAME groups.”

Other factors could play a role.

“These include BME populations coming from lower socioeconomic backgrounds, having [public-facing] occupations, different cultural beliefs and behaviours or being at high risk in view of their increased risk of certain diseases such as diabetes and heart disease.”

This includes NHS staff. One in five NHS workers are from an ethnic minority background, however, the numbers are even higher when we look solely at doctors and nurses.

The worst affected area in the UK is London when taking into account population.

For example, Brent has had 250 cases for every 100,000 people in the borough, which is the highest in the country.

The borough also has the second-highest percentage of ethnic minorities.

Forty per cent of London residents are from ethnic minority backgrounds. More than 25% of transport workers operating tubes and buses are ethnic minorities.

Several doctors and nurses who have died in the UK due to Coronavirus were from immigrant backgrounds.

Dr Ramesh Mehta explained that two Indian doctors have died and at least five are on ventilators.

He said: “The PIO doctors on ventilators will have caught it in the last couple of weeks. At that time there was hardly any equipment available.

“They are all working on the frontline against COVID-19 and so are highly likely to have caught it in the workplace.”

“The government keeps telling us all this equipment is coming but it is not reaching the frontline. Many Indian doctors are contacting us saying they don’t have the right equipment.

“It has been a big mess right from the beginning as we had patients going into hospitals – who did not know they had Coronavirus – and the doctors treating them were not allowed to wear masks.

“Now they do have to wear masks and gloves. Earlier, only those in the ICU were doing it. Even surgical masks should be changed for every patient and there is often not enough stock.”

Dhiren is a journalism graduate with a passion for gaming, watching films and sports. He also enjoys cooking from time to time. His motto is to “Live life one day at a time.”
‘Murderer’ of Indian Nurse could face Capital Punishment
Pakistani Doctors Protesting for PPEs are Beaten by Police