Pakistani Doctors Protesting for PPEs are Beaten by Police

Pakistani doctors in Balochistan were protesting over the lack of Personal Protective Equipment, however, they were beaten by police.

"Sticks and butts of AK-47 rifles rained down on us."

At least 50 Pakistani doctors were arrested in Quetta, Balochistan, for protesting about the lack of Personal Protective Equipment (PPE).

The protests came amid the rapid increase in COVID-19 cases in Pakistan.

Police used batons to beat and disperse the protestors.

On April 6, 2020, hundreds of doctors and paramedics were seen in face masks, calling for more PPEs and saying that the government has failed to deliver the promised supplies.

They held up slogans before the police intervened.

A senior police official said that protestors were arrested for defying a ban on public gatherings.

The next day, protests continued against the arrests and lack of equipment. Doctors even threatened to stop working unless the detainees were released.

Several doctors and paramedics were injured in the violent clash.

“In the beginning, I thought, ‘How could police use violence against the frontline fighters of COVID-19 when some days ago the same officers had saluted us for leading during the pandemic?’

“But we were wrong. Sticks and butts of AK-47 rifles rained down on us. We were dragged through the street and thrown into trucks.”

Dr Abdul Rahim, a spokesperson for the doctor’s association, explained that doctors refused to leave the police stations unless their PPE demands were met.

He said: “I was arrested yesterday, I am still in the police station.

“They have given orders for our release, but we have refused to leave because no steps have been taken.

“Doctors came out for equipment, and you beat them and then locked them up. What kind of law is that?”

He added that a lack of equipment was putting medics at risk. 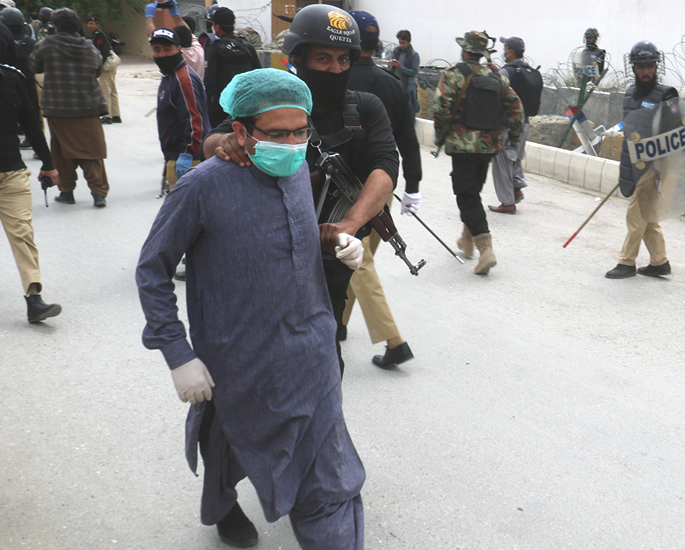 The number of Coronavirus cases in Pakistan has significantly increased. There have been over 4,600 cases and 66 deaths.

Pakistan has struggled to provide sufficient PPE kits to doctors, with orders for additional equipment often stuck in a backlog created by increased global demand.

Doctors say a lack of preparation by the government has led to dangerous conditions for health workers.

Dr Rahim added: “In the trauma centre, before the Coronavirus, we had enough kits that if we were operating in the operation theatre, we had a surgical mask and cap.

“Now we don’t even have that.”

Despite the reports of PPE shortages, Balochistan government officials claim that there are sufficient PPE kits in hospitals.

They also said that the protesting doctors do not treat Coronavirus patients.

“The doctors protesting don’t look after Coronavirus patients, we don’t understand their justification for protesting.”

He went on to say: “The Balochistan government has already been providing [doctors] with sufficient masks, equipment and medicine

“There is just one hospital in all of Balochistan that is dealing with coronavirus patients – the Sheikh Zayed hospital [in Quetta] – and we have provided all equipment there.”

Meanwhile, the protest meant that patients were not receiving the care they needed.

Noor Muhammad Kurd, whose brother is a cardiac patient, said:

“Even patients in a very serious condition are not being treated.”

According to reports, at least 18 doctors in Balochistan have tested positive for COVID-19.

Images courtesy of AP and Reuters