US Indian Doctor beaten by Police during Farmers’ Protest

Dr Swaiman Singh and colleagues on volunteer medical duties were “brutally” beaten Indian police during the farmers’ protest in Delhi.

“They fractured the arms of three doctors"

Disturbing footage circulating online shows how a US Indian doctor and his team were brutally beaten by the Indian Police in Delhi during the farmers’ protest on Thursday, January 28, 2021.

Dr Swaiman Singh, an American Indian doctor from New Jersey, has described how he and his team were brutally beaten and trashed while they tried to help people injured in violent clashes.

Ironically, the volunteer medics had been helping an injured policeman when they were attacked by other 10 to 15 officers.

“They hit us brutally. They fractured the arms of three doctors, hit a guy in the skull, nearly opened up his skull.

“Hit guys in the leg who have bruises all over their legs, one of them was actually holding an IV pole as we were suturing up a police officer at the time.”

On Thursday, January 28, 2021, thousands of farmers were met with tear gas and police with batons at barricades in Delhi.

At least one farmer was killed.

The turmoil started when a flare was fired at the face of a farmer who was driving a tractor and lost control crashing into a barrier and injuring many officers and protestors.

None of the Government’s emergency services was on standby to help.

“Farmer, police officers or CRPF (the armed Central Reserve Police Force)….We didn’t see any difference to us they were all humans and as doctors, it was our duty to serve.

“But after about an hour…next thing you know a group of about 10 to 15 police officers rushed towards where we were and starting hitting these two guys (nearby) with sticks.

“And in hitting them they started hitting us, hitting us brutally. The images are shocking, you can see in the videos from bystanders.”

In November 2020, he had travelled to India for a family emergency but decided to stay on to help after seeing the gravity of the situation.

He has been providing aid on the borders of Delhi since, where tens of thousands of farmers have been camping at the capital’s outskirts for two months.

He has been posting videos on his social media revealing what is happening on the ground, where they are based.

In one post he emphasises that the protest is not backed by any religion but for the sake of a farmer and that is all farmers from all faiths. 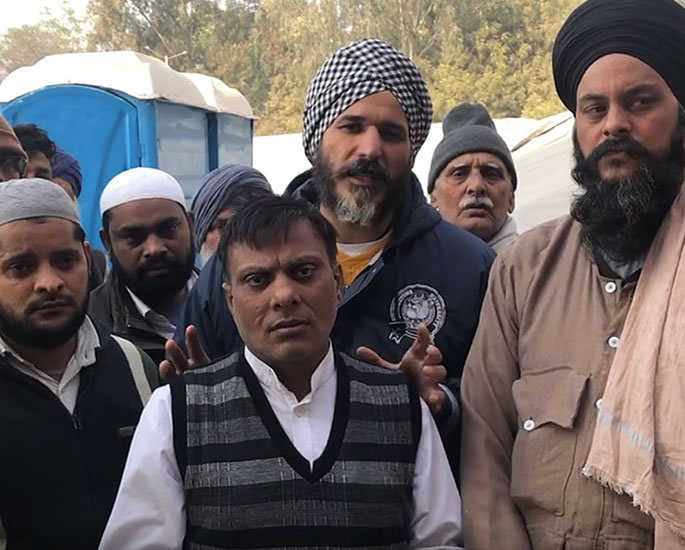 The farmers protest in India has been peaceful until Thursday, January 28, 2021, when the government cut the internet connection at the main sites.

Electricity was also cut off, and food and water supplies were blocked by the police.

The farmers’ protest is considered the biggest protest in history.

Most specifically, they are fighting for the withdrawal of new laws, which will favour large private buyers over producers destroying their livelihoods.

After Thursday’s events, the police arrested 200 people and accused those who breached barricades of ‘violence and destruction’.

Activists, journalists and politicians have also been accused of speaking out against police brutality and accusing them of sedition and inciting violence on the scene.

Leaders worldwide have also expressed their feelings about Thursday’s incidents.

For instance, Labour MP for Slough Tanmanjeet Singh Dhesi said he was ‘shocked and saddened’ after seeing the mobs’ footage.

On Friday, January 29, 2021, a group of 200 men, believed to be Hindu nationalists attacked the farmers at Singhu Border, the main protest sites.

A video report by a local news channel also showed one Sikh farmer being pulled from the protest site, beaten and stripped of his turban and trousers before being carried off by the authorities.

Dr Singh fears the situation will result in the deaths of many more protestors in the coming days. He said:

“This is devastating. People are going to start to die in one, two or three days if not today….These farmers are literally dying.”

Eleven rounds of talks between the farm unions and the government have so far failed to ease the situation or come to any kind of agreement.