“We have been protesting for the last six months"

Police were in agreement with the rally taking place and Indian farmers were given specific routes to take so they did not interrupt the Republic Day parade, which took place in central Delhi.

However, a number of protesters stormed the Red Fort complex by breaching security.

Protestors climbed the walls and domes of the Fort and hoisted their own flags alongside the national flag.

Farmers deviating from the pre-agreed routes caused clashes with police, and the protest quickly turned violent.

Police made use of their batons and tear gas in an attempt to alleviate the chaos.

Dozens of Indian farmers and police were left injured, and one protester was killed after his tractor overturned as tear gas was set off by police. 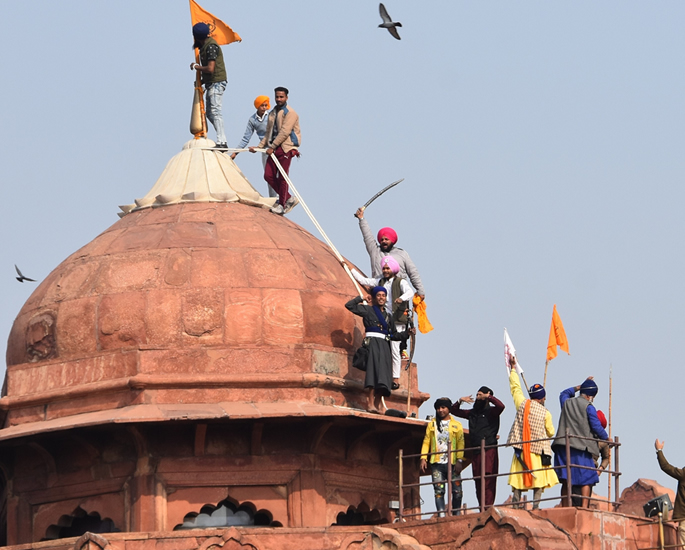 Diljender Singh, a farmer from Punjab, was one of the protesters to storm the Red Fort.

He had with him the Nishan Sahib, the flag of Sikhism.

Singh said: “We have been protesting for the last six months but government didn’t bother to listen to us.

“Our ancestors have charged this fort several times in history.

“This was a message to government that we can do it again and more than this if our demands are not met.”

Authorities have suspended mobile internet services in several parts of the capital, as security work to restore order.

Farmers in India have been protesting for the government to roll back three controversial farm laws.

The new laws loosen rules around the sale, pricing and storage of farm produce, striking fear within farmers across India.

Indian farmers fear that the new laws will threaten concessions that have been in place for decades to protect them, such as assured prices.

The new laws could also leave farmers vulnerable to exploitation by private companies.

Tens of thousands of farmers have been striking against agricultural reforms on the outskirts of Delhi since November 2020.

As a result, this is one of the longest farmers-led protests that India has ever seen.

More than 40% of India’s population are farmers, but the country’s agricultural sector is extremely poverty-ridden, with farmers often selling their crops for one rupee.

Louise is an English with Writing graduate with a passion for travel, skiing and playing the piano. She also has a personal blog which she updates regularly. Her motto is "Be the change you wish to see in the world."
Patak’s Former Boss Kirit Pathak killed in Dubai Crash
Husband Tied Up & Strangled Wife and Baby to Death