This also includes Asians, particularly those who fall in older age brackets.

Whilst the young generations of British Asians work out in gyms and do more sports. There is a concern for the sedentary lifestyle of their parents and grandparents. Especially, the 40-60 age group.

The lack of physical activity, even something like a 10-minute brisk walk is not being done by this age group in particular, especially within ethnic minorities, highlights the report.

Overall, this lack of exercise leads to the risk of illness and frailty, resulting in a bad quality of life.

In response, PHE has started a new campaign, named One You. Placing British-Asians and many others in their focus, they aim to help promote older people in partaking in more exercise.

A Staggering Lack of Exercise

In total, PHE’s report found that 6.3 million adults, aged between 40-60, don’t regularly take a brisk walk of 10 minutes. One in five in this age bracket also is deemed as “physically inactive”, meaning they don’t complete 30 mins of regular exercise per week.

It shows a radically different attitude towards exercise in decades past. The UK has become 20% less active nowadays than the 1960s, with key areas targetted. For example, the East of England contained the biggest proportion of least active men. In London, it had the least active women.

The report also found that London contained the highest number of ethnic minorities not completing a brisk walk. 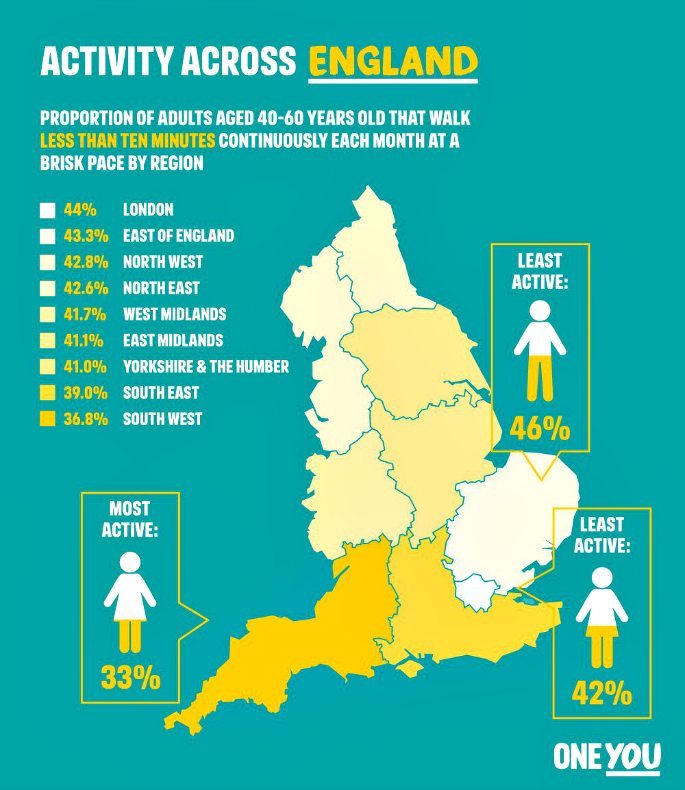 From these results, not only did they find a huge proportion of ethnic minorities not exercising enough. PHE also reported that this age bracket is more likely to suffer from a disability or long-term condition due to their lifestyle choices.

This could potentially lead to a dangerous level of influence older Asians will impact on their younger counterparts. If parents are not influencing their children by doing exercise, it merely indicates it is ‘not something we do’. Therefore, leads the children into the same cycle.

Taking a look at this chart, already we can see that as age increases, the level of exercise falls. With the 40-60 age group acting as the most worrying, given all the health consequences considered. 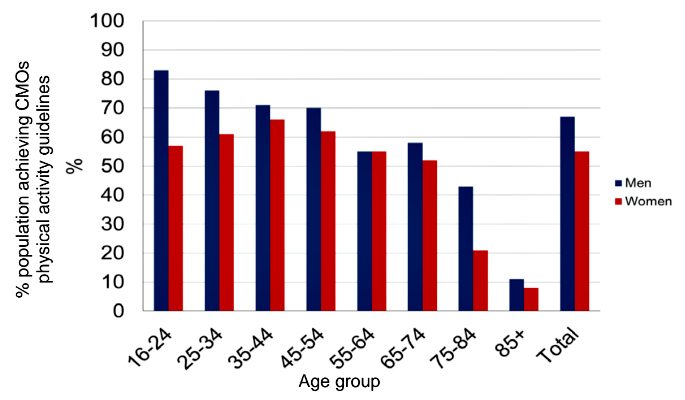 Why are older Asians reluctant to exercise?

Older Asians settled in the UK are primarily from their homelands, where exercise is not something that was done outright per se.

In addition, they had much fresher diets with very little or no processed foods at all. In the UK, it is a completely different affair.

Foods today are very processed, with high use of fats in Desi cooking, and getting into the car feels easier than walking to the shops. Leading to a lazy attitude towards good health.

Walking is something that is free and does not require equipment.

Engaging the family into walks is an easy step to start everyone realising the benefits of simple exercise for a much healthier outlook. The important thing about the walks is that it is not a stroll in the park but at least 10 minutes of brisk and fast walking which increases your heart rate.

Getting older Asians to do exercise acts as no easy task since they feel so used to ‘staying in’ or using transport to go out.

But the reality of not exercising enough means the NHS has more pressure placed upon it. Costing the health organisation roughly £900 million. Perhaps the most startling figure the PHE report found reveals that one in six deaths are directly linked to physical inactivity.

This means we need to address and tackle the concerns behind older Asians’ lack of exercise. 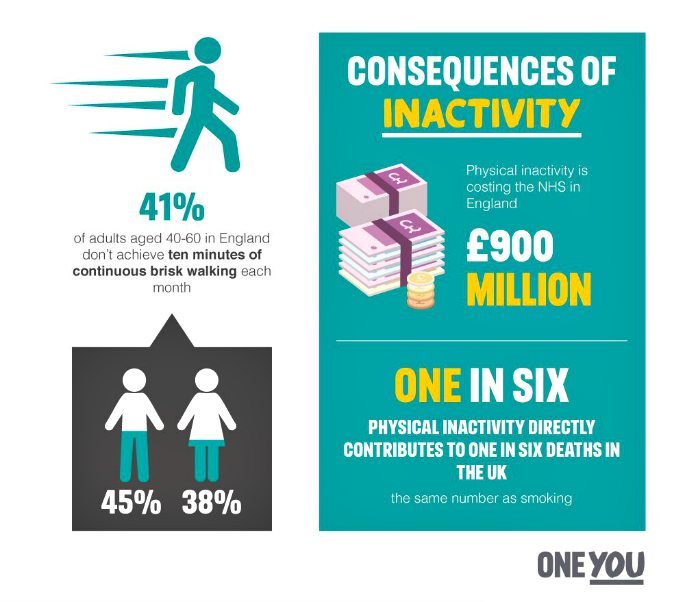 Older Asian women not exercising is a major issue within the UK South Asian communities and needs the younger generations to help and enable them to start walking or do any other kind of exercise.

Maybe the social side of walking can be a good angle, where groups of older women become encouraged to go for walks. Or to form walking groups that meet and walk say in the local park or even around the block.

Shyness and reluctance are the barriers that we need to break to help these women develop a healthier lifestyle. Otherwise, it is only going to get worse with health deteriorating faster than it should.

The Benefits of a Brisk Walk

However, if ethnic minorities began to partake in regular exercise, they would begin to experience a range of health benefits. Even just completing a 10-minute brisk walk can perform wonders.

For example, the risk of death becomes reduced by 15%. In addition, the risk of some illnesses and conditions also reduce. These include type 2 diabetes, cardiovascular disease, dementia and even some forms of cancer. 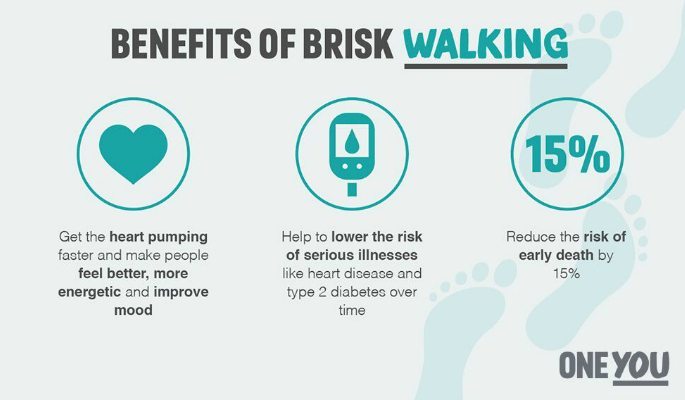 With all these potential benefits to gain, it only stresses the importance that British-Asians need to participate in more exercises.

Through creative and engaging ways to encourage the older generation for walks, perhaps we can one day see higher figures for activity. But first, issues need to become tackled to encourage ethnic minorities to improve their lifestyles.