Amir Khan believes He should be Honoured by The Queen

Boxer Amir Khan has said that he believes he should be honoured by the Queen for all that he has done throughout his career.

"Maybe they feel that I haven't achieved enough"

Amir Khan feels he should be honoured by the Queen, admitting that he is confused by the lack of one.

The Bolton boxer has had a long career, spanning 39 professional fights. He won a silver medal at the 2004 Olympics before turning professional the following year.

Khan went on to become a unified light-welterweight world champion.

As well as his achievements inside the ring, Khan has also set up a boxing academy in Bolton and does charity work around the world through his foundation.

Fellow sports stars like Dame Kelly Holmes and Frank Bruno have nominated the 32-year-old for an honour, however, he is yet to receive one, something which has baffled Khan.

He said: “I don’t know if I’m one of the people they’ve forgotten about because people always expect me to have one, it shocks everyone that I don’t.

“I have the British flag on my waistband and I’m surprised when I see people get awards when they have done half of what I’ve done.

“I’ve built a boxing academy in the UK and I do a lot of charity work here, maybe they’ve just forgotten about me.

“I am half-Pakistani but I don’t think it’s got anything to do with colour, I’ve been treated nothing but fairly in this country.

“Maybe they feel that I haven’t achieved enough to get one, but that’s one for them to answer.” 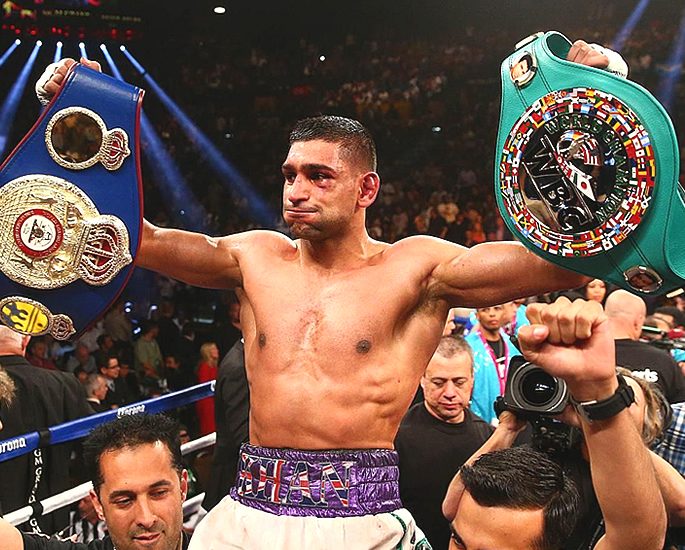 Khan has had two bouts in 2019, losing to Terence Crawford before emerging victorious against Billy Dib.

The boxer has no intention to retire but remains committed to his foundation.

“I’m still doing my charity work, I do a lot in the UK like feeding the homeless and going to schools to speak to kids.

“I don’t make any money from it, it costs me money to do it and hopefully I’m going to do more, I want to give back to the people of England.

“I see people getting these awards and they’ve done a quarter of what I’ve done, not just in sport but in my charity work too.

“Obviously I do it from the heart but it’s nice to be appreciated and it would be good not just for me but for my family.

“I’ve done very little of my own charity work in Pakistan but I’ve been honoured by the government and the country.”

“People all around the world can see it but it’s not recognised in England.”

Throughout his career, Khan has struggled for UK recognition and he thinks that it is down to not receiving an honour.

Amir Khan added: “I can’t really cry about it, I have to just keep doing what I’m doing.

“I’ve done everything I dreamt of doing and everything other people dream of doing.

“If you ask a young kid what their ideal boxing career would be, they’d want to fight in New York, in Las Vegas and in the biggest arenas in the UK, and I’ve done it all.

“I’ve won fights and lost fights and it’s been a great journey but I want my journey to be remembered.

“It would be nice to be remembered by the country I represent.”