The deep plunging neckline of the gown exhibits Alia as a fully fledged woman.

Alia Bhatt graces the September cover of Harper’s Bazaar Bride India, and it has left us gasping for breath.

This shoot comes only two months after her previous appearance in the magazine, where she posed for the July edition in a denim avatar.

‘Alia Bhatt Grows Way Up’ says the current cover, which is as fitting as ever.

The deep plunging neckline of the gown exhibits Alia as a fully fledged woman, whilst her deep plum lipstick adds a sultry element to her look.

With a classic 1920’s hairstyle, the Student of the Year (2012) star epitomises a sensual seductress as she glares straight into the camera lens.

Harper’s Bazaar Bride proudly posts the magazine cover on social media, and Alia is quick to retweet the stunning snap to her 5.8 million followers.

Alia is on the top of her game and is definitely a contender within the Bollywood industry when it comes to female actors.

She is currently busy promoting the movie, Shaandaar (2015), where she stars alongside Shahid Kapoor.

Another project filling up her diary is her role in the British drama, The Sense of an Ending. 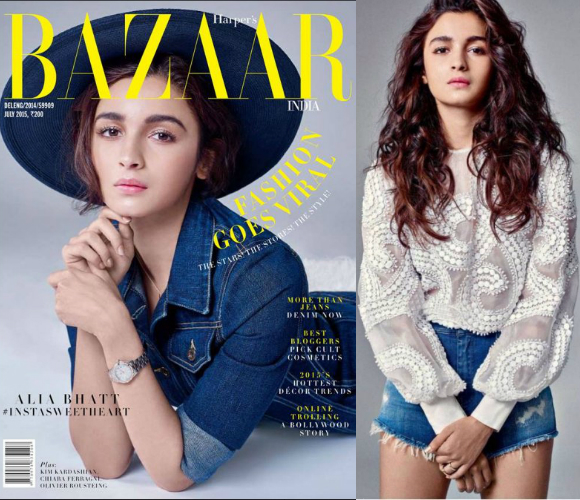 We also hear on the Bollywood grapevine that Miss Bhatt may be the lead in a new drama directed by Ritesh Batra.

The name of this endeavour is yet to be announced, but there is already a buzz amongst Alia fanatics.

Though the beauty is dominating Bollywood with her acting, she is definitely ruling the roost within the cover shoot world.

Alia’s recent Harper’s Bazaar India appearance is nothing short of magnificent, and we cannot wait to see what else she has in store for us!