Sonam Kapoor is ‘Dark and Sexy’ in Harper’s Bazaar

The midnight blue avatar is laced beautifully across Sonam's figure.

‘Dark and Sexy’ is how Harper’s Bazaar India describes Sonam Kapoor in the September issue, and her cover shot is nothing short of amazing.

Sonam has covered many tabloid magazines in the past, but her latest one is sure to send temperatures racing.

The midnight blue avatar is laced beautifully across the entirety of the star’s figure, with a polar neck design moulding a drastically daring look.

A slicked-back hairstyle and hooped Jaipur gem earrings paint a hauntingly beautiful image of Sonam, whilst the dark and gothic makeup palette emphasises her sensuality.

It comes as no surprise that the fashionista returns as the cover girl for Harper’s Bazzar. She has been featured on Vogue India, Cosmopolitan and Filmfare magazine.

Gracing many best dressed lists and catwalk shows, Sonam has been titled as one of the most fashionable women in Bollywood.

The actress recently visited Australia where she attended the Indian Film Festival, and showcased an array of exceptionally stylish outfits in various events.

One of her most outstanding looks was in lace, donning a Paolo Sebastian caped design. Sonam simply mesmerised everyone with her impeccable taste. 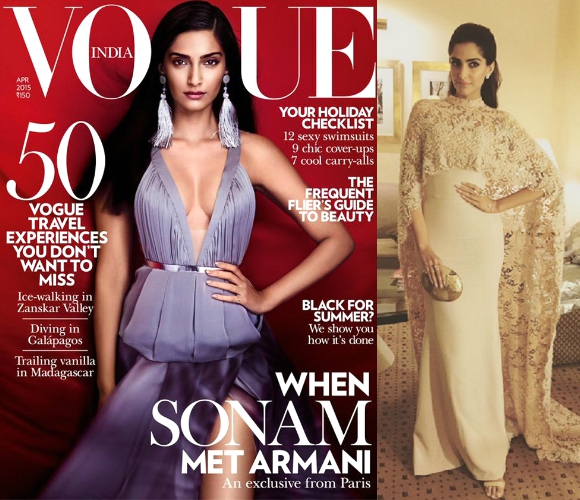 We cannot get enough of this fashion queen, and it seems neither can Hrithik Roshan, who recently told the press at an event in Mumbai:

“I think what Sonam brings on to a set in that smile on her face; a 100-watt one that radiates and spreads across the ambience.”

With Bollywood hunks singing her praises, along with a string of stunning magazine covers, Sonam is on top of her game at the moment, and she is definitely here to stay!