Ali Zafar tells us more about Chashme Baddoor, a comedy of errors, a remake of the 80’s classic and is certain to have you rolling around in your seats.

“Just make sure you come and watch Chasme Baddoor at the cinema.”

At a press conference in London, the star told DESIblitz that he really enjoyed working with acclaimed Director David Dhawan: 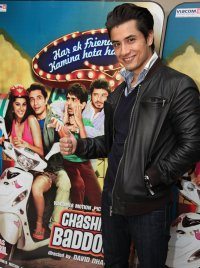 “It turned out to be not just a great time but a fabulous time because he’s so much fun on the set. He still has this angst of a child and an innocence in him. He gets so excited right from early morning into dawn when we pack up. That’s a really good thing about him,” says Ali.

“I had a very great time. I mean we were shooting in places like Goa and Mauritius so we were on the beach. We’d hang out in the beach in the night after we finished up a shoot so it was fun,” says Ali.

“The entire team was great to work with, so was David Dhawan,” Ali adds.

David Dhawan is a director well known for creating similar comedy successes. In the 80’s and 90’s, David formed a stellar collaboration with actors Govinda and Salman Khan as well as legendary music composers like Anu Malik and Bappi Lahiri. His biggest hits have included Shola Aur Shabnam (1992) and Partner (2007).

On re-making the movie, David says: “It wasn’t difficult…Today’s energy and pace is different…I’ve made Chashme Baddoor in a holiday, masti mood, but without compromising on the script…you have to rewrite it and add new things.”

Ali plays Sid in the film. He and his two best friends, Jai and Omi (played by Siddharth Naryan and Divyendu Sharma respectively), live in sunny Goa. 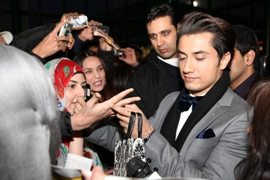 Jai and Omi are notorious players and are always in search of new girls to woo. Sid in comparison is more reserved and sensible about life until of course he comes face to face with Seema (Taapsee Pannu). Seema falls for Sid at the distress of Jai and Omi and what ensues is a hilarious battle to break the loved-up pair apart.

Ali’s role was previously played by legendary Bollywood actor Farooq Shaikh in the original 1981 movie. Ali even had a chance to meet him while shooting the film:

“I had wanted to meet him because he played the role that I am playing in this film,” says Ali.

Sajid Wajid provides the music for the remake, with Ali also stepping in to lend his legendary vocals. The movie boasts seven new songs in total, with Ali singing three of them, including, ‘Dhichkyaoon Doom Doom’, ‘Andha Gauda Race Mein Ddauda’, and ‘Early Morning’, which he was also involved in remixing.

After meeting media, Ali attended a fan event where hundreds came out to see him in Cineworld Feltham, London. Many of his fans expressed their anticipation at seeing Ali sing and act on the big screen.

His fans waited for many hours to catch a glimpse of their hero, and they were not disappointed. Ali paraded in front of them, signing autographs and posing with them in photos. 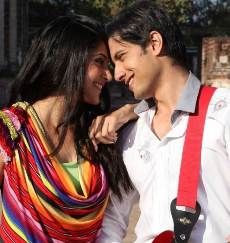 On the red carpet we asked Ali if he had any message for the readers of DESIblitz. He replied: “Just make sure you come and watch Chashme Baddoor at the cinema.” We definitely will, Ali!

The film has high expectations to be a resounding success. It has already received positive reviews from a special press screening. One critic hailed Chashme Baddoor as ‘laugh-out-loud’:

“I would say that you leave your brains at home and prepare to fall in love with 2013’s most charming romantic comedy. David Dhawan is back to his best in this film that will make you laugh out loud and rejoice that the king of zany comedies is back.”

At a press conference held last year, the cast of the original 1981 film, Deepti Naval, Farooq Shaikh and Rakesh Bedi, all gave their favourable opinions to the new digital remake.

Is Ali ready for the inevitable comparisons? He smiles:

“Sure. I don’t think there will be too many of them because we’ve treated it in a different manner. David has taken the basic plot of the film yes, but the way the film runs, the screen dialogues, everything has been uptempo-ed, according to modern times.”

David Dhawan is seen as a perfect choice as director for this rom-com remake; which also has elements of buddy romance between the three male leads.

With his youthful looks and originality, Ali Zafar is also a perfect choice. Viewers can also anticipate seeing Ali perform his own songs in the movie. His chemistry with Siddharth and Divyendu is also a joy to watch, and his comic-timing is just right.

Overall, Chashme Baddoor is expected to be one of the stand out films of 2013. With comedy, romance and good music, this is a movie not to be missed.

What did you think of Chashme Baddoor?