Anoushka Shankar daughter of the legendary sitar player Ravi Shankar, as part of her world tour, performed at the Birmingham Town Hall; charming audiences with her intrinsic sitar playing ability teaming up with renowned tabla player Tanmoy Bose and other musicians.

The audience were mesmerised by her sound

Anoushka Shankar, the daughter of sitar maestro Ravi Shankar, hugely delighted audiences at the Birmingham Town Hall with her Sudakshini performance. She definitely showed elements of her father in her fingers as she played sitar accompanied by Tanmoy Bose (from Kolkata) on tabla, Pirashanna Thevarajah (from London) on mridangam, kanjira and ghatam; Ravichandra Kulur flute, kanjira and an English student of Ravi Shankar’s from Newcastle on tanpura.

Born on 9th June 1981 in London, Anoushka believes in the timeless beauty of the ancient, classical Indian musical styles. She began training on sitar with her father as a child, gave a public performance at the age of thirteen. Her childhood was spent between London and Delhi. As a teenager, she lived in Encinitas, California and attended San Dieguito Academy. In 1999, she decided to pursue a career in music after becoming honours graduate. After her first album ‘Anoushka’ released in 1998, she has been recording and performing live around the world. Including concerts with her father. 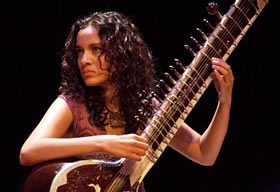 Her performance at the Birmingham Town Hall of two halves provided different pieces in each with a different collection of compositions. The first half was primarily dedicated to her father’s work and the second to newly composed ragas.

DESIblitz were at the concert to witness a mind blowing performance by one of today’s rising stars from the world of Indian classical music. It was a pleasure to see and hear the child prodigy of the legendary virtuoso Ravi Shankar play live in Birmingham, UK. The concert was interspersed with traditional South Indian Music, and an exploration of the relationship between the North and South Indian traditions.

The delectable Anoushka’s entrance on the stage was greeted with huge applause and cheer. After her namaskar to the audience, she sat down in the central aspect of the stage on a raised rectangular pod, tuned up, and began her performance. Announcing that she would play some of her father’s work to commence and followed by some of her own work too. 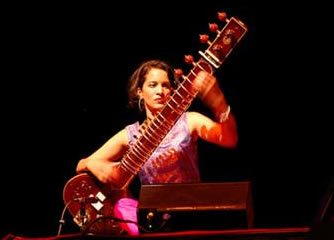 Her opening sequence was a solo sitar raga piece which played homage to the start to her concert. The sound of the sitar filled the Town Hall as the audience watched and listened to her in appreciative silence. Then, her sitar began to produce the sounds of her father’s compositions teamed with the tabla rhythms provided by Tanmoy Bose. The audience were mesmerised by her sound and accuracy of play with each of the notes of her instrument capturing the hearts of many in the crowd.

The next addition to the stage was, Pirashanna Thevarajah, who sat opposite Tanmoy Bose who was seated left of Anoushka. He came on stage with his mridangam, a two-sided skinned drum with a low tuned sound, which he placed on his laps as he sat cross legged. He then, brought the hall to life with his loud and intricate rhythms accompanying a fast and effective piece played by Anoushka. Pirashanna then left the stage. Then, another raga was played by Anoushka and Tanmoy before the interval. 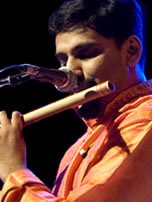 The second half introduced more of Anoushka’s outlook and styles of sitar orientated music with compositions of her own taking stage. Ravichandra Kulur appeared on stage with his flutes to a highly appreciative welcome from the audience.

The performance started with the use of different up-tempo rhythms played by Pirashanna on mridangam and Tanmoy on a small dafli which gave a contextual uplift to the intrinsic and fast playing by Anoushka of her composition. The applaud was loud and huge after this performance. She followed this with an amorous South Indian piece which had a lilting melody and a calming and soothing mood.

Then came an interesting twist on stage with the next composition which introduced the use of verbal renditions of rhythmic ‘bols’ by Pirashanna and Tanmoy, instead of actual beats played by them on their drums. This classical style of ‘Indian beat-boxing’ took audiences by a welcomed surprise, whilst Anoushka continued to play the melody on her sitar in the background, and Ravichandra Kulur played the kanjira to support the rhythms. Cheers and applaud showed tremendous the love for the performance. Before the final performance, Anoushka introduced the musicians to everyone.

The final piece of the night, rag Jog, was a sitar, flute and rhythm based composition which allowed riffs played on the star to be re-produced on the tabla, followed by the flute and then by mridangam. 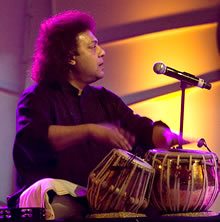 Allowing each of the musicians to express the sequence using their particular sound. It also comprised major solos played by each performer. Especially, Pirashanna who played the mridangam with determined vigor opposite his colleague Tanmoy on tabla who encouraged each of his beats with his hand movements. Then the favour was returned by Pirashanna who saw Tanmoy show him and the audience that he was the true master of the tabla on the night by playing breath-taking solo tabla beats. The sounds filled the air of the Town Hall giving a treat to every listener.

The piece was then finished by Anoushka Shankar taking control as she did at the start to conclude the raag. As she hit the final notes and the drums hit their final slaps, the audience applauded loud with rapturous cheer together with a standing ovation for the performance. The artists bowed to the appreciation and left the stage with heart filled smiles. Leaving everyone feeling elated after seeing an excellent concert by Anoushka Shankar and her accompanying musicians.

Anoushka Shankar is on a world-tour and Birmingham Town Hall was definitely one of her welcomed venues by the reaction of the crowd at the end! Credit given to the Birmingham Town Hall and Symphony Hall (THSH) team for presenting such a delightful concert. And if you have the chance to see her live, we highly recommend it because you will see the essence of a young beautiful performer showing the depth, knowledge and playing skills of an instrument that is not easy to play, the sitar, put on the world map by her legendary father, Ravi Shankar.

Special thanks to Lyle Bignon (THSH).

Miss Pooja is Panjaban in the movie
Harbhajan Mann