It comes after Mustafa addressed bloggers writing film reviews ahead of the release of his movie Quaid-e-Azam Zindabad (2021).

The actor wrote: “To all the bloggers: With all due respect, let people go and watch the movie first, your reviews can wait.

“You coming up with reviews (be it right or wrong) can damage the film big time and it won’t help the industry in any way.

“This industry needs support… Let people decide if the film is worth watching or not. Thank you.”

A number of other major figures in the Pakistani film industry commented on the post, siding with the Actor in Law (2016) star.

Actor Naveed Raza also commented a thumbs up in support.

However, Zara Tareen was less enthusiastic and replied on her Instagram Story, accidentally referring to Mustafa as Mufasa.

She said: “I’m not sure reviews damage film or the industry in any way but doing films for free as a rule certainly damages the market for an entire profession so #ShutupMufasa.” 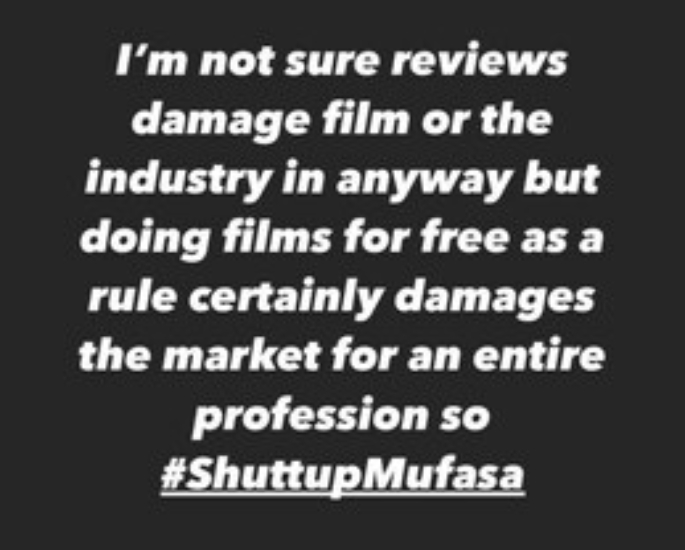 The actress later apologised for the mix-up by posting a picture of Mufasa from The Lion King (1994) on her Instagram Story.

She added over it: “I wholeheartedly take back my words, I should not have insulted Mufasa by using his name.

“Using his name in place of a loudmouth, unprofessional, entitled, ill-mannered brat was uncalled for.

“The Lion King was legendary and Mufasa was wise and respectful and still gets amazing reviews because he earned them.”

Tareen originally worked as a photographer before moving from Texas in the USA to Pakistan where she became a model.

She then became an actress and was propelled into the limelight after featuring in the Hum TV serial, Mushk (2020 – 2021).

Meanwhile, Mustafa was first noticed in Sheeshay Ka Mahal (2002) despite the drama ultimately being a flop.

Throughout the years, he has taken on a variety of both production and acting roles and established himself as a massive movie star.

However, Fahad Mustafa is most well known for hosting the gameshow, Jeeto Pakistan, which airs on Fridays and Saturdays on ARY Digital.

Naina is a journalist interested in Scottish Asian news. She enjoys reading, karate and independent cinema. Her motto is "Live like others don't so you can live like others won't."
Anaik Sachdev aged 9 appears on The Ellen Show
Bollywood Stars look Radiant at GlobalSpa Awards