Who is ‘Ali’ the New Wife of Russell Peters?

Comedian Russell Peters got married in a celebrity-packed wedding, but who is his new wife Ali? We find out more.

"I thank you for coming into my life"

Comedian Russell Peters tied the knot in a lavish ceremony at the Ritz Carlton in Dana Point, California.

He and his now-wife Ali got married just before sunset on February 20, 2022, with the ocean in the backdrop.

Around 300 guests attended, many of whom were celebrities from the worlds of comedy, music, and sport.

Cedric The Entertainer conducted the ceremony, leading through the “I do’s”.

One highlight was the UFC’s iconic announcer Bruce Buffer introducing the newlywed couple as they entered the wedding reception.

In an announcement, Russell said: “Can’t believe it’s already been a week!

“Last Sunday I had the privilege of marrying the most wonderful, beautiful, courageous, independent, smart, funny, caring… (the list goes on) woman I’ve ever met.

“This is a place I never ever believed I deserved nor thought would ever happen but as the universe would have it… I’ve been fortunate enough to find my person!

“Mrs Ali Peters I thank you for coming into my life and making my world so much more secure and loving… they say you should marry your best friend and although I had never considered marrying Marlon I also never understood that statement until I met my wife.

“I love you baby and thank you for putting a smile on my face that will remain until the day I die… I love you my Madam Wife!!!” 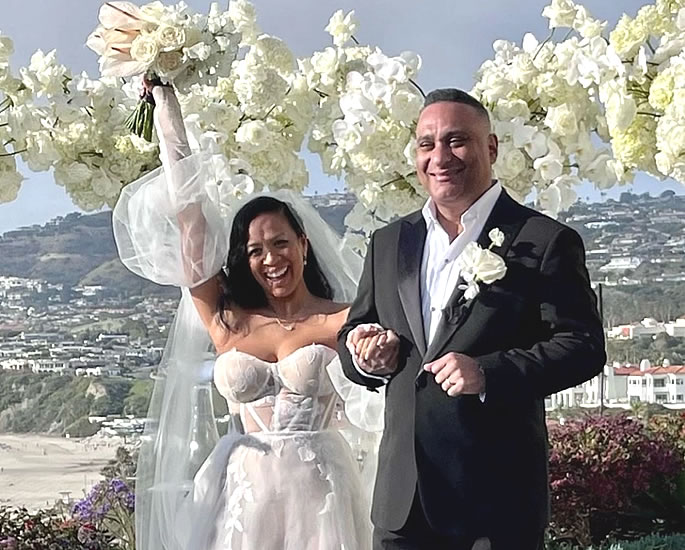 It looked to have been an enjoyable wedding for everyone who attended but a lot of interest is on Russell Peters’ new wife Ali and who she is.

While Russell Peters is known for his comedy career, Ali is not one for the limelight as her Instagram profile is set to private.

But she has previously featured on Russell’s podcast Culturally Cancelled and first appeared on an episode in July 2021.

At the time, Russell gave an insight into their relationship.

He explained that they had initially met before Covid-19 disrupted everything in the world. Russell was also in a relationship at the time, believed to be Jennifer Andrade, with whom he has a son.

Russell said: “We had met before, but it wasn’t anything, we just like met.

“I was like ‘nice to meet you’, and that was about it, and I was in a relationship, so I was like meh.”

Ali went on to say that they later got back in touch when one of her clients wanted to buy a house in Russell’s neighbourhood.

As a result, she went to meet him with her niece.

While Russell and Ali have only just married, the comedian would often refer to Ali as his wife on the podcast.

Although Ali has a private Instagram profile, Russell posts pictures of the two together.

In a post on Valentine’s Day in 2021, Russell had hinted at marriage with Ali.

He wrote: “It’s Valentine’s Day and I never really believed that I would find someone that made me feel complete… is it sudden? Yes it is… was I looking for it? No… have I found the person that I genuinely want to spend my life with? YES!!!

“I love you Ali and I’d say I can’t wait to grow old with you but as it happens, we’re both already old AF!!

“Life doesn’t happen when you want it to… it happens when it’s supposed to… Happy Valentines Day everyone!!!”

Dhiren is a journalism graduate with a passion for gaming, watching films and sports. He also enjoys cooking from time to time. His motto is to “Live life one day at a time.”
Aamir Liaquat’s Wife Dania Shah happy to Live with Tuba Anwar
Deepika Padukone was Told to Get Boob Job at 18