Russell Brand performs in Bangalore and says he might “fall in love with” and marry Deepika Padukone.

"If anyone has her phone number, let me know."

British comedian Russell Brand, who made his debut in India as the headline act of the 2015 Comedy Central Chuckle Festival, says he could ‘fall in love with’ and potentially marry Bollywood actress Deepika Padukone.

Performing in Bangalore on the 27th June 2015, Brand joked: “I was told if I wanted alcohol I should go to Vijay Mallya and if I wanted a bride I’d find one in Deepika Padukone.”

He later said: “The person I could potentially fall in love with and marry while I am in India, Deepika Padukone. She is popular.

“If by the end of the night I am not arrested or censored, we are going to look and see if I can perhaps seduce Deepika Padukone.”

As the audience responded with laughter and cheers, Brand continued by saying to them:

“If anyone has her phone number, let me know. We can ring her in the course of the evening.”

We’re not too sure how Deepika’s current beau Ranveer Singh will have taken Brand’s comments! 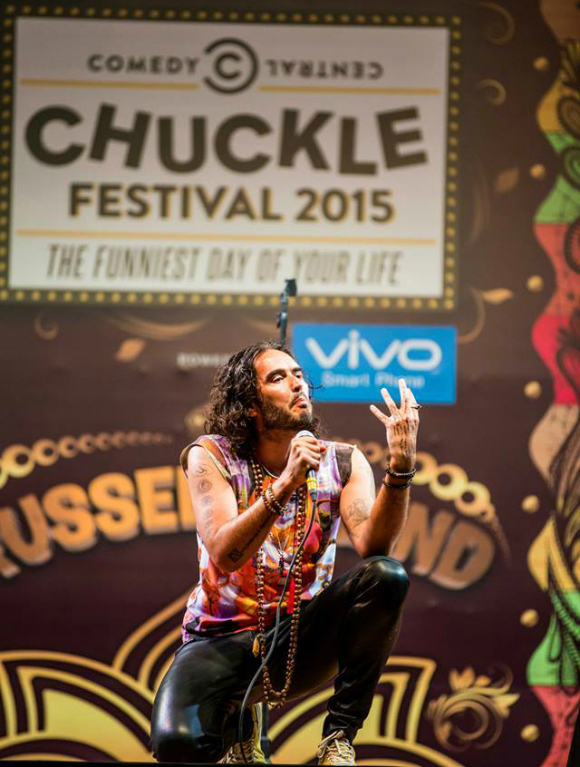 Brand’s edgy comedy has struck a chord with Indian audiences on his tour with the Comedy Central Chuckle Festival, from New Delhi to Mumbai.

He also made jokes about how the Indian audiences were more polite in the auditoriums than when driving on the roads:

“You people honk so much… as if devastation is coming. You are better when in an auditorium than on the road.”

Brand’s repertoire also included current topics such as the Maggi controversy, Yoga Day, and a critique of the Twilight films, and he drew much laughter and cheering when he interacted with the audience and called some of them onto the stage.

But, the wittiest material was centred on his personal life; Brand opened his set with a joke about his previous 14-month-long marriage to singer Katy Perry, saying:

“I have never performed in India, unless you call my marriage a performance… there are a lot of Bollywood films that last longer than my marriage.”

The audience were left to wonder at the end of the show, if Brand is indeed planning on marrying in India again, and perhaps this time to a Bollywood star?