Urfi Javed is known for her bold outfits and she took it up a notch by wearing a dress made out of safety pins over black lingerie.

"This dress is made entirely out of safety pins!!"

In an Instagram video, Urfi Javed left nothing to the imagination with her bold outfit.

The Bigg Boss OTT contestant is known for her standout, and sometimes risqué, style statements.

As a result, she is often criticised on social media.

Her latest outfit has now raised a lot of eyebrows.

In an Instagram video, Urfi is seen dancing to Kate Earl’s ‘All That Glitters’ whilst wearing a dress made entirely out of safety pins.

The completely see-through dress was worn over Urfi’s black lingerie.

Her hair was tied in a neat bun while her makeup was kept to a minimum to ensure that all eyes were on her outfit.

She captioned the post: “This dress is made entirely out of safety pins!!

“Thank you Geeta Jaiswal for helping me with my crazy ideas!”

The bold outfit garnered much attention and many took to the comments section.

Some of Urfi’s followers loved the outfit’s uniqueness and posted fire and love heart emojis.

One fan said: “Outfit so hott.”

One commented: “You definitely going to achieve everything that you want in your life, haters gonna hate.

“Keep posting and keep doing what you like… love the way you are.” 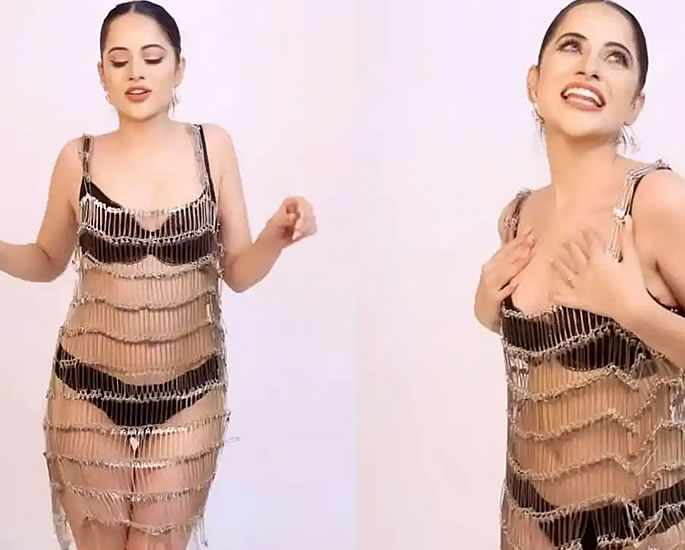 However, others trolled Urfi.

One person called her a “mental case”.

One user said: “If the safety pins opened and hurt you then it will be a disaster.”

Urfi Javed was previously trolled for wearing a reversed shirt with its buttons at the back and collar at the front.

One user wrote: “She is the most shameless woman in the world, always wearing weird outfits.”

Another added: “I’m not sure about this look, it’s confusing. How do you move around in this? It’s not practical.”

Urfi Javed has been open about her life choices and revealed that she struggled to get a break in the industry, admitting that it left her traumatised.

She previously said: “I was a girl who was told that girls should not have their voice.

Dhiren is a journalism graduate with a passion for gaming, watching films and sports. He also enjoys cooking from time to time. His motto is to “Live life one day at a time.”
Does an Engagement Ring Have to be Expensive?
Did Alia Bhatt’s Wedding Saree cost Rs 50 Lakhs?