Indian actress Urfi Javed has worn some sensational outfits that always gather mass attention. Here are some of her most bold looks.

"Yeah I wore a dress made of broken glass pieces!!"

Urfi Javed dares to push the boundaries of fashion with every outfit she wears.

Whether she’s flaunting her slender figure in see-through pants or modernising Desi ensembles, the actress does not shy from experimentation.

The outlandish star is no stranger to backlash over some of her clothing choices, but that does anything but deter her.

She famously fuses different materials, cuts and colours to create some bold looks. At times, her outfits aren’t even made from traditional fabrics per se.

However, what people cannot take away from Urfi is her ability to bear these clothes with such poise and brashness. It promotes self-confidence to the highest degree.

So, here are 10 bold Urfi Javed looks that will excite and intrigue your fashion interest. 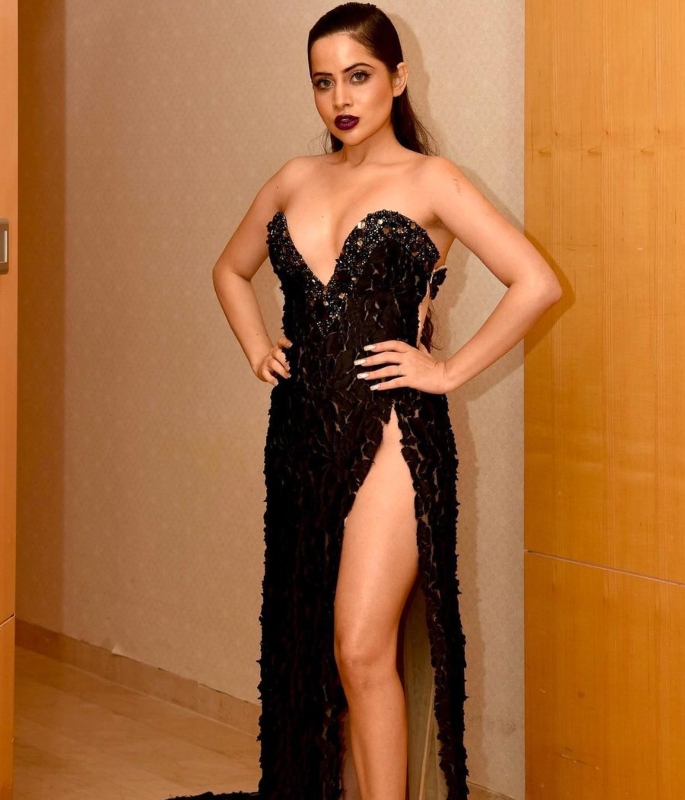 In true Urfi Javed fashion, she opted for a glamorous thigh-high slit gown for the 2021 Filmfare Middle East Awards.

Made by Dubai based designer, Dar Sara, the Indian actress donned a plunging neckline which accentuated her slim figure.

The shimmering ensemble caught the attention of many at the ceremony. The strapless detailing was accessorised with a simplistic ring and a pair of black heels.

To complement her sleek hairstyle, Urfi opted for a smokey makeup look.

She had defined eyes with a dark purple lipstick that kept her looking decadent.

The white nails helped emphasise the glow of this black dress which received incredible praise. 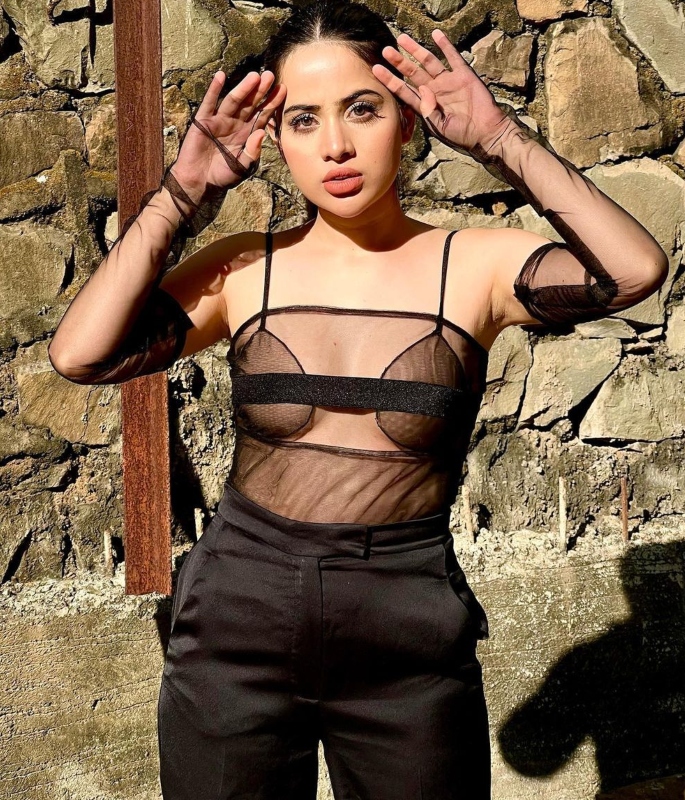 However, Urfi tagged Indian brand Shweta’s Wardrobe as the source of her ensemble.

The black see-through top has panel detailing and is accompanied by matching lightweight gloves.

She chose slim black trousers and went for a slick ponytail to keep everything looking chic.

Her coral lipstick and minimal makeup kept everything stunningly tidy.

The fearless outfit was snapped at the airport to which some netizens responded, calling her a “cheap Bella Hadid”.

Although, others applauded her decision for choosing something so risky. 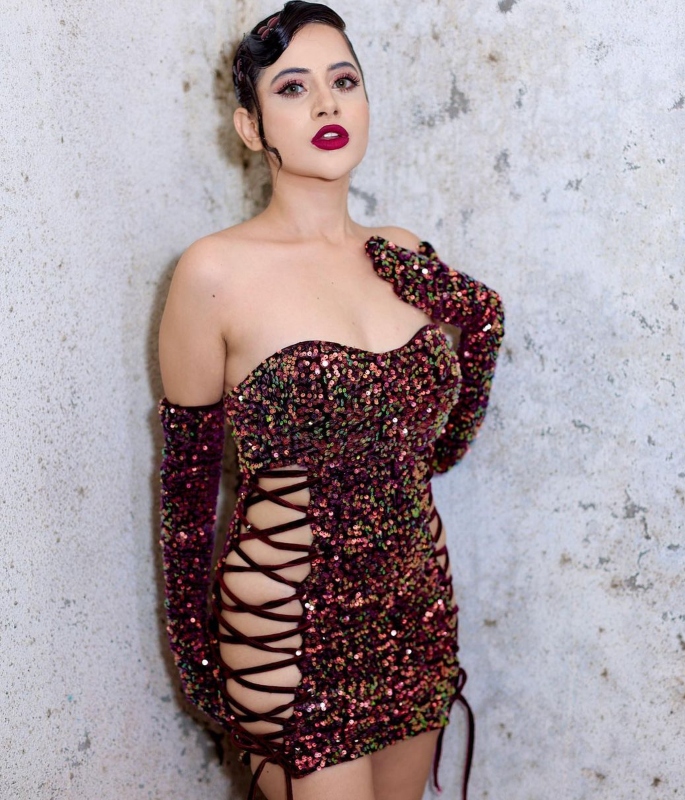 The boldness oozes out of every aspect of this garment. The gleaming sequined dress was strapless but made up for this with a laced up design on the sides.

The deep purple and maroon hues of the dress were matched with Urfi’s elegant make-up.

The rich eyeshadow, matte red lipstick and light foundation tied everything in superbly.

“Obsessed with this look!!! Retro vibes.”

Opting for a 50s hairstyle and matching gloves, the diva grabbed eyeballs for this outlandish look. 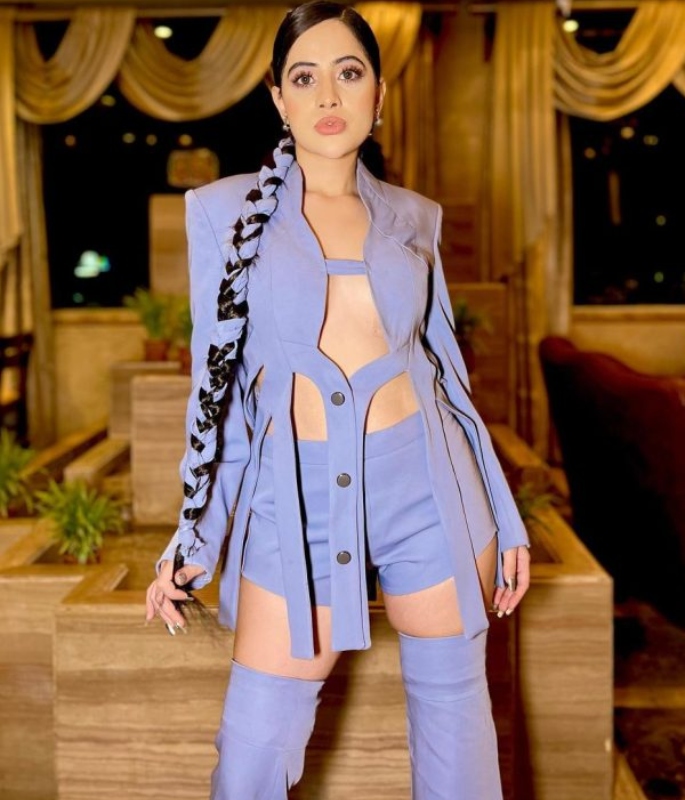 There’s one thing that Urfi tries to do with every outfit, and that’s to test her fashion limits.

She’s known to utilise any fabric, material or object out there (as you’ll see in some later choices). In this peculiar instance, she donned a DIY-inspired cut-out lilac pantsuit.

The blazer has the sleeves and shoulder pads intact but the front is open with cleavage. Ironically, the jacket is still buttoned up as seen on the front panel.

The ‘pants’ follow a similar design with the upper thighs showing giving the look a geometric silhouette.

The long ponytail intertwined with lilac fabric tops it off brilliantly.

Unsurprisingly, an onlooker gave their criticism on Instagram, saying:

“What’s the point in wearing anything when everything is on show anyway?”

She is one of the few stars that are well aware of the trolling comments but always claps back with another experimental ensemble. 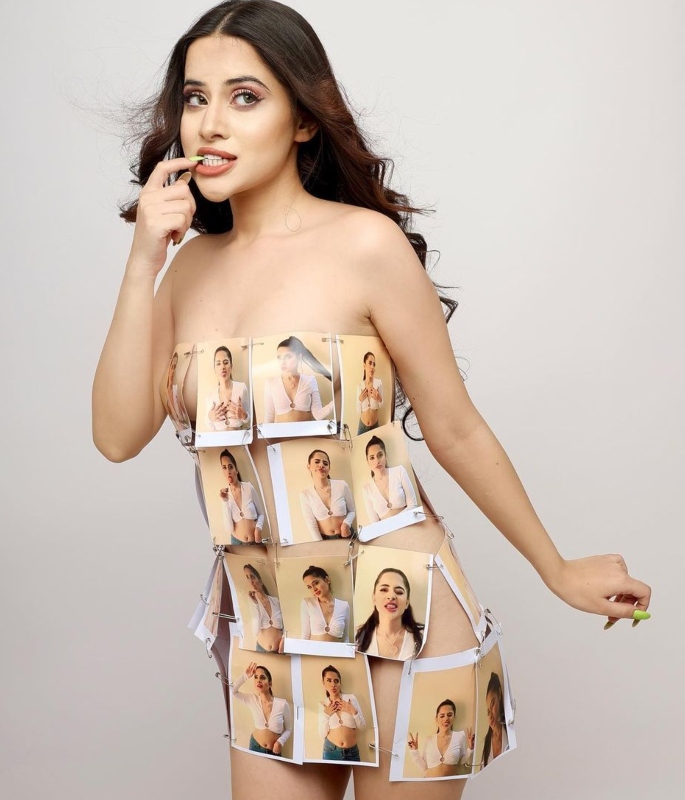 Yes, you saw that right, this ‘dress’ is entirely made of self-portraits of Urfi Javed herself.

Only holding its shape with numerous safety pins, the outfit went viral across social media for its audacity.

The self-portraits are from a shoot in which she wore denim jeans and a cropped white blouse.

The different poses give a quirkiness to the look which fits into Urfi’s personality.

The gutsy actress dropped the images along with a video where she grooved to Nicki Minaj and Jason Derulo’s track ‘Swalla’ (2017).

In the clip, her hair flows naturally as she dances in some giant tanned high heels.

Urfi noted that the inspiration came from an idea she saw on the internet and wanted to recreate.

Whilst it’s questionable if this piece would be good for a daily ensemble, we wouldn’t put anything past the diva’s choices. 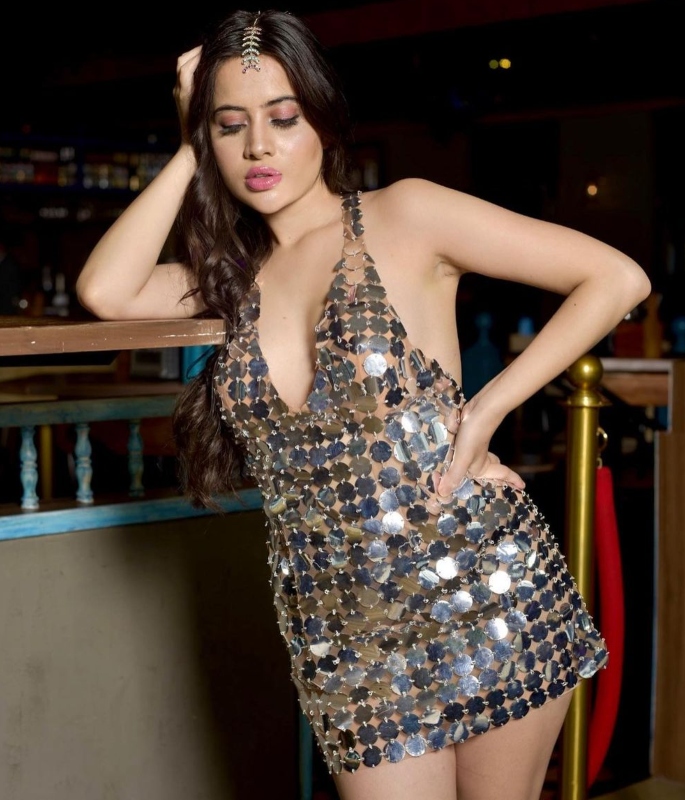 Urfi embodies self-confidence to a tee and this is highlighted through her decision to wear loud or unusual garments.

She raised temperatures stepping out in this sizzling silver mini dress. The mini reflective circles are moulded together over a thin underlayer matching Urfi’s skin tone.

The plunging neckline showed some saucy cleavage which drew the attention of many fans across the globe. Komal Azam commented on Instagram:

“Wow, just so good! Like small mirrors all coming into one! Urfi is the fashion queen!”

Tying in a light pink shade across the lips and eyes provided a welcomed burst of colour.

The whole look was topped off with a shimmering headpiece placed in the middle part of the freeflow hair. 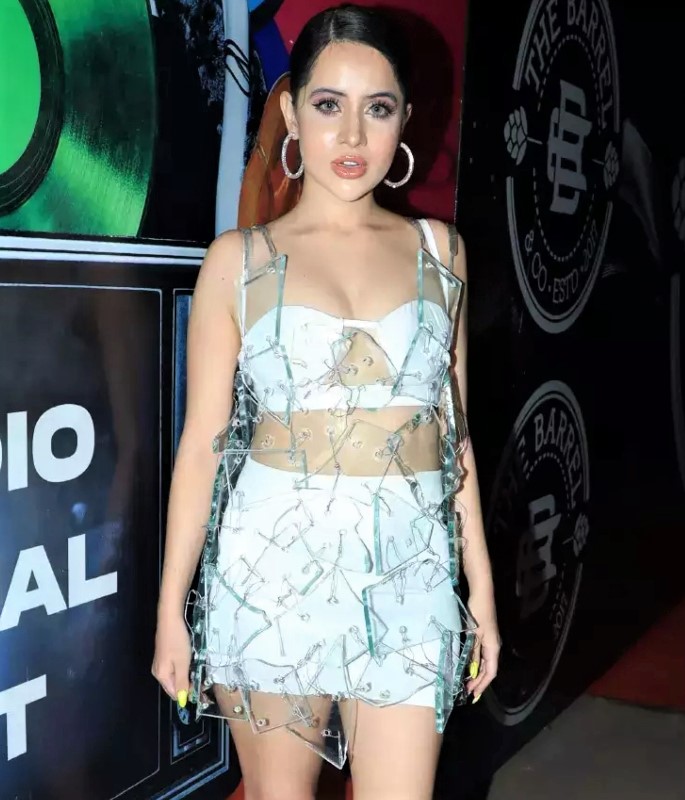 Whilst some may question Urfi Javed’s fashion choices, she challenges herself to always elevate her style.

She’s worn outfits made out of safety pins and photos and now she took it even further by wearing shards of glass.

Although, she changed into something more comfortable after the red carpet snaps. No one could blame her as she had revealed the garment weighed 20kg.

However, her admiration of the piece was still high as she wrote on social media:

“Yeah I wore a dress made of broken glass pieces!! I think this looked fabulous!

“People call me weird, crazy but guess what we all are crazy and weird, I’m just smart enough to embrace and let it empower me!”

This piece was certainly eccentric by itself but Urfi made sure to enhance it with lavish hooped earrings, naturally laid hair and subdued yellow nails. 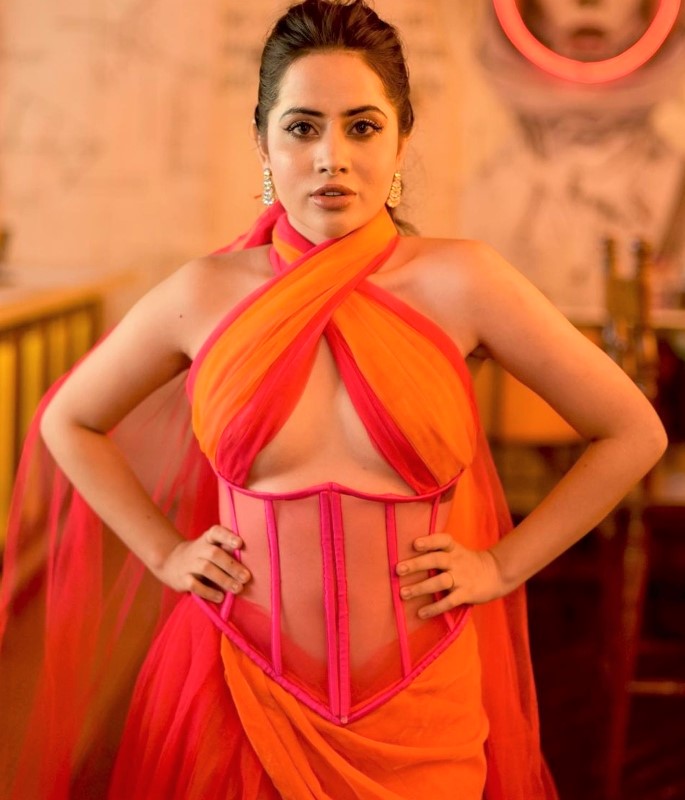 Whether you like her or not, you simply cannot ignore her. This beaming corset and sari fusion showed just how adventurous Urfi Javed is.

The corset is transparent and shows off the actress’ toned midriff, and the fabric of the sari acts as a bra, overlapping her neck and combining everything into one.

It suited the warm tones of the outfit and the embezzled earrings added a glamorous edge.

Whilst some witnesses thought the sari fabric-turned bra was too revealing, others thought it was refreshing to see.

After all, Urfi has been labelled as the female Ranveer Singh as she continues to be an icon for her ultra-cool style. 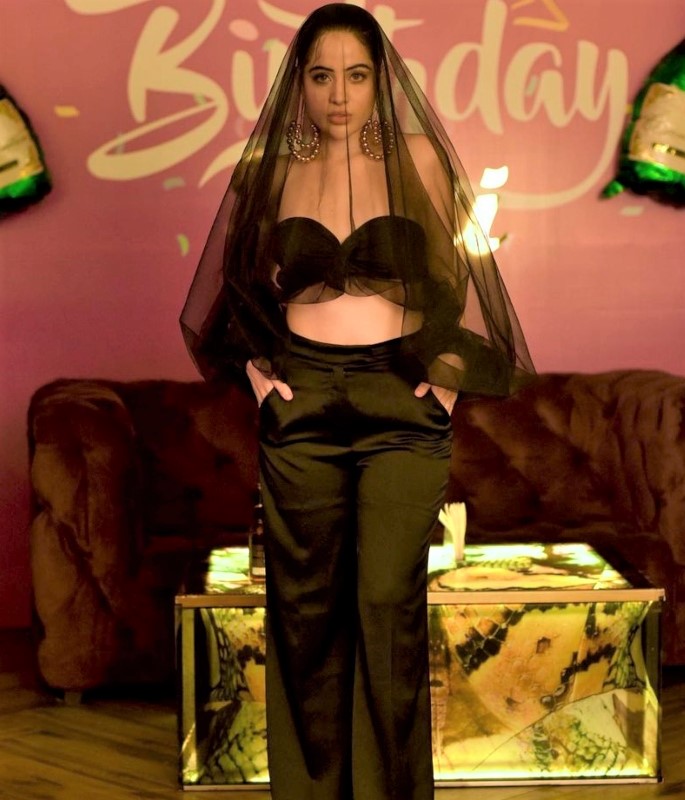 For her pre-birthday bash, Urfi was inspired by the black widow for this darker look. But, what made this outfit so bold and memorable was the matching veil.

There were quite contrasting feelings when seeing this ensemble but the star managed to rock it nonetheless.

Of course, some skin was on show so Urfi went for a black bralette with wide silk trousers.

The looser fitting pants gave a more defined silhouette and highlighted how athletic the actress is.

For accessories, she went for giant dangling earrings that were designed out of gold metallic beads.

The black and gold colour palette gave off a James Bond type theme – classy yet extravagant. 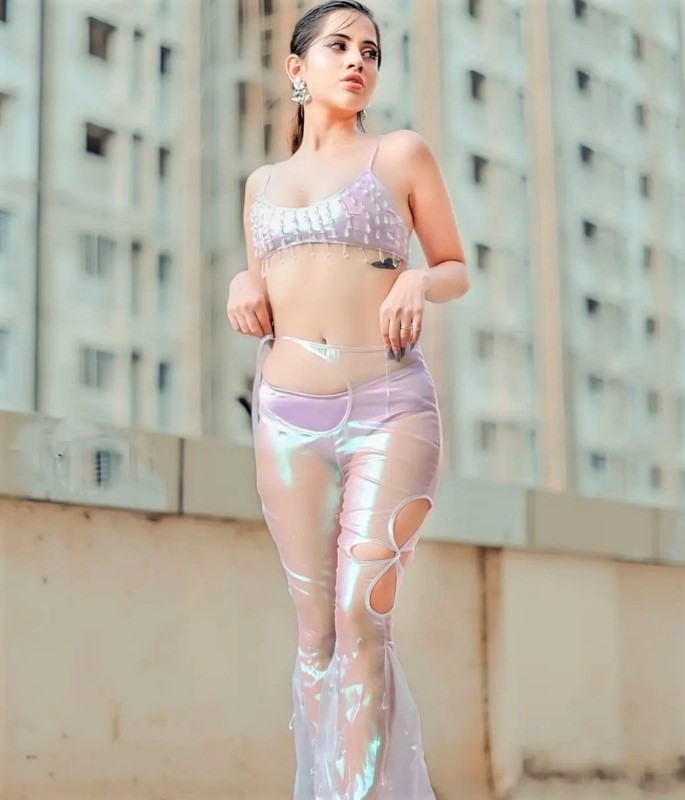 This final look made an appearance in Worli, Mumbai, as Urfi Javed attended an event at a local hotel.

The pants were snug but flared out towards the bottom for a retro twist. Whilst the flower-design cutout on the side provided a statement look.

Deciding on a defined eyeliner colour and glossy lips, Urfi opted for matching nails to compliment the garments.

She tied her hair into a flowy ponytail, allowing it to fall naturally as she mostly does, and went for some sparkling silver jewellery.

Whilst some mocked the plastic in the outfit and compared it to a “condom”, Urfi clapped back at the trolls in a previous interview, stating:

“It doesn’t really affect me because when you rise up in your career, it doesn’t matter what people below you are saying.”

“For me, the voices of the trolls faint down. Hence, I don’t listen to those people.”

Whether it’s this tonal two-piece or a dress made out of glass, Urfi remains confident in every outfit she chooses.

That’s why she has become such an online sensation. Her relentless ethic to redefine the typical fashion standards is nothing short of impressive.

Additionally, she is consistently criticised for any look but always replies with another outlandish pairing, no matter how controversial.

Let’s see what kind of daring ideas she has in store next.