Disha Patani's beach holidays are unlike any other.

Disha Patani never fails to impress her fans with her stunning beach and bikini looks.

The actress’ Instagram is all about flaunting her bikini-perfect curvaceous body.

She loves beaches and more than that, she loves sporting swimwear when on a vacation with her rumoured boyfriend Tiger Shroff.

She gives us major fitness goals with her every photo on Instagram.

If you are planning for a beach vacation and want to ace the beach look, then take some inspiration from Disha Patani.

Let’s check out the actress’ bikini looks that give us major fashion goals. 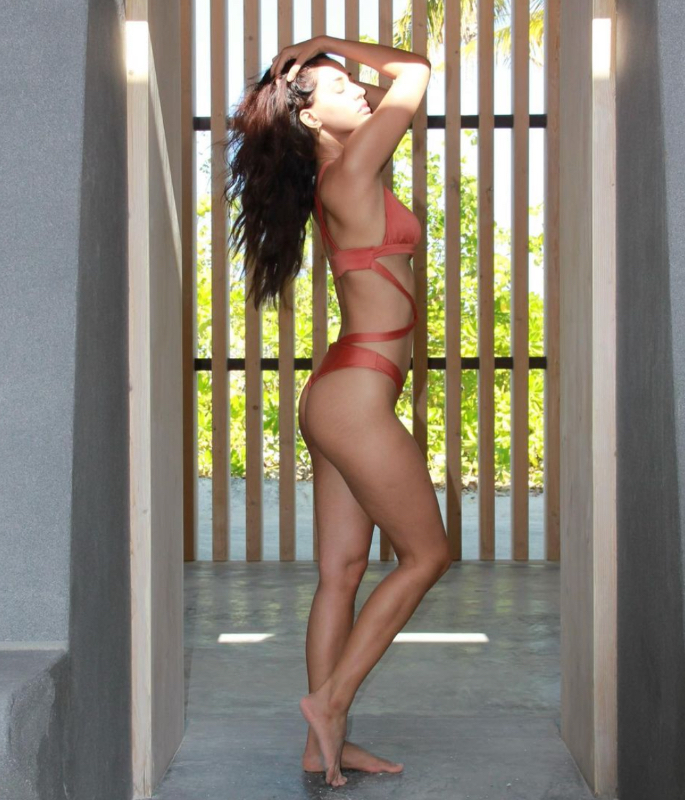 Always exotic, never boring, Disha Patani’s beach holidays are unlike any other.

Disha Patani’s rust-red swimsuit is just how one could ditch the bikinis for a daringly chic alternative of the two-piece swimwear.

The cut-out swimsuit gave us a peek at her chiselled washboard abs indicative of all the time Disha spends when she’s not at the beach.

If this bikini outfit didn’t heat your phones right now, we’re sure the rest of her beach looks will do the trick. 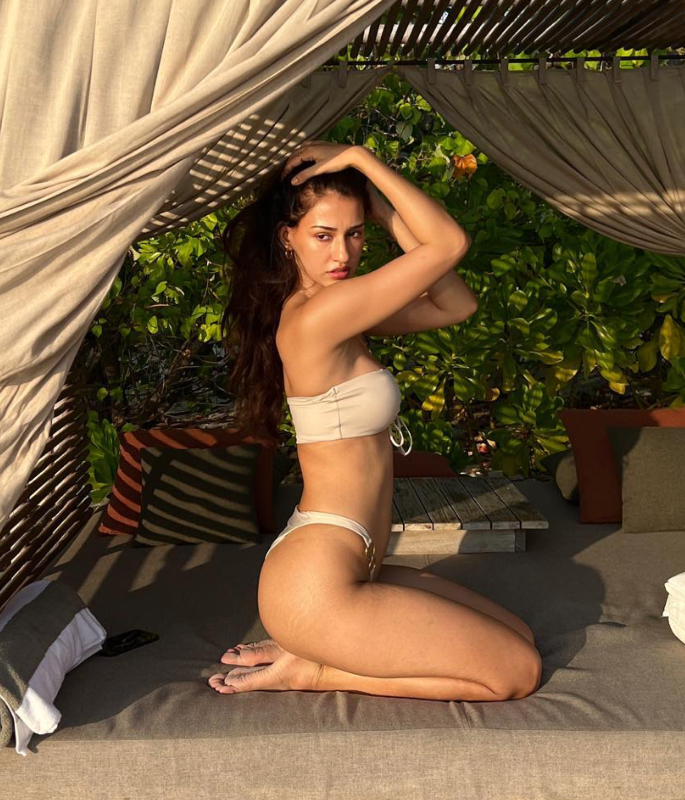 Disha Patani, who was a finalist in Miss India 2013, has never failed to impress fans with her sizzling beach looks.

She has also ruled many hearts with her performances in films.

The actress stunned fans in an Instagram post where she looked effortlessly glamourous in a sexy beige bikini. 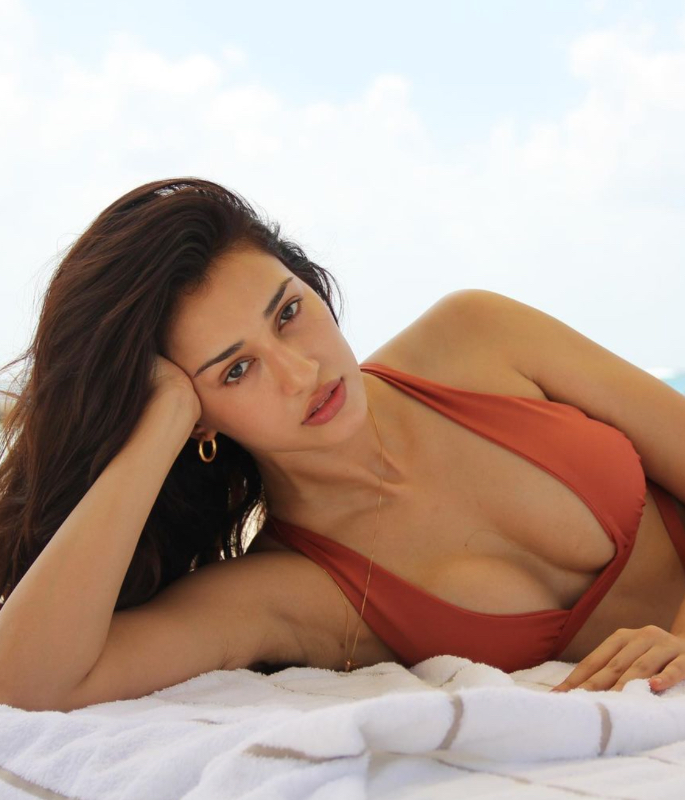 Disha Patani made sure to set the internet on fire as she showcased her killer curves in a stunning cut-out bikini.

The picture sees Disha posing for the lens by looking off the camera.

Taking to her Instagram handle, the Malang actress shared a throwback picture from one of her beach vacations.

On New Year’s 2022, the Heropanti actor also shared a picture from a similar location. The alleged couple had flown to the Maldives to celebrate the New Year together. 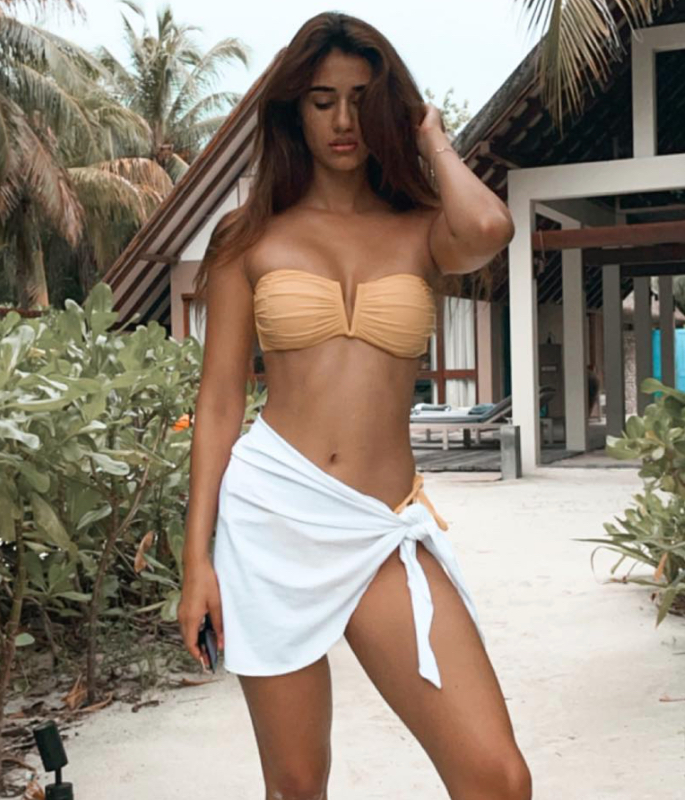 Fans were left in awe after Disha Patani shared a breathtaking picture of herself posing in a peach-coloured strapless bikini.

The Bollywood star paired her swimwear with a white wrap skirt. The combination of her bikini and wrap skirt accentuated her figure.

Disha flaunted her toned abs and legs as she effortlessly posed on a sandy path in front of a beach resort.

Disha looked gorgeous as she opted to leave her hair down and went for a minimalistic makeup look, giving more attention to her tanned body. 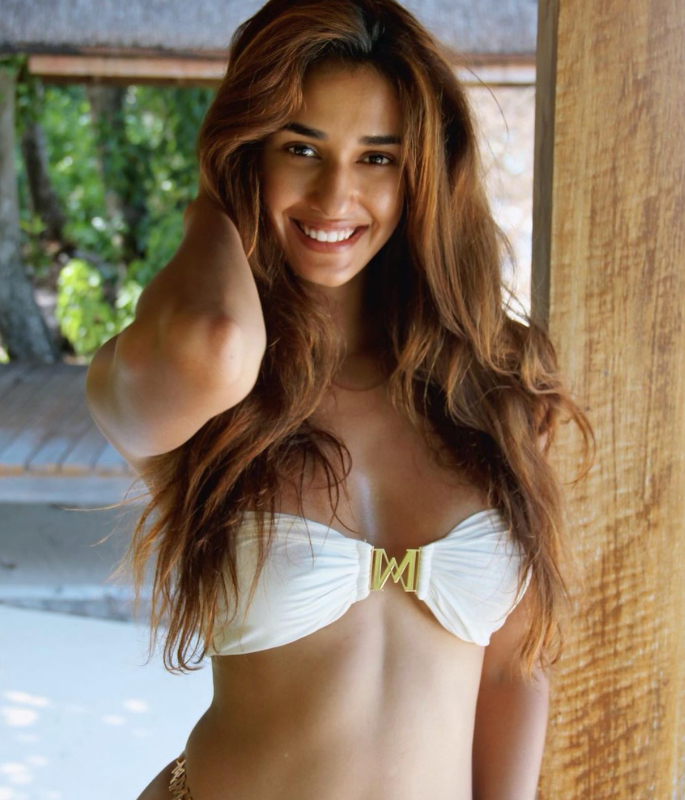 The actress has stirred up quite the storm on social media through her Instagram account with a new picture of hers, looking ravishing in a white bikini.

If looks could kill, this would be it. Disha Patani has a solid track record of setting temperatures rising on the internet.

Besides mesmerising her fans with her onscreen presence, she also impresses them regularly with her crazy discipline in fitness and exercise.

Her pursuit of a healthy lifestyle has always inspired people around her in the past. Disha Patani has a solid track record of setting temperatures rising on the internet.

Besides mesmerising her fans with her onscreen presence, she also impresses them regularly with her crazy discipline in fitness and exercise.

Her pursuit of a healthy lifestyle has always inspired people around her in the past.

Disha made her debut in Bollywood with MS Dhoni: The Untold Story. She subsequently appeared in Baaghi 2, Malang, and Heropanti 2 as well.

She currently has several films in the pipeline, including Nag Ashwin’s upcoming Project K. Touted as a mega-budget sci-fi thriller, it also features Amitabh Bachchan, Deepika Padukone, and Prabhas.

Disha will also be seen in Ek Villain Returns, Yodha and KTina.

Ravinder is a Journalism BA graduate. She has a strong passion for all things fashion, beauty, and lifestyle. She also likes to watch films, read books and travel.
10 Bold Urfi Javed Looks and Photos to See
8 Tips & Tricks to Spot a Fake Designer Lehenga