Disha Patani took to Instagram and shared a gorgeous picture of herself sporting a strapless peach coloured bikini.

her gorgeous picture said it all.

Fans were left in awe after Disha Patani shared a breathtaking picture of herself posing in a peach coloured strapless bikini.

The Bollywood star paired her swimwear with a white wrap skirt.

The combination of her bikini and wrap skirt accentuated her figure.

In what looks to be a throwback picture from a previous holiday, Disha flaunted her toned abs and legs as she effortlessly posed on a sandy path in front of a beach resort.

Disha looked gorgeous as she opted to leave her hair down and went for a minimalistic makeup look, giving more attention to her tanned body.

The actress did not include a caption as her gorgeous picture said it all. 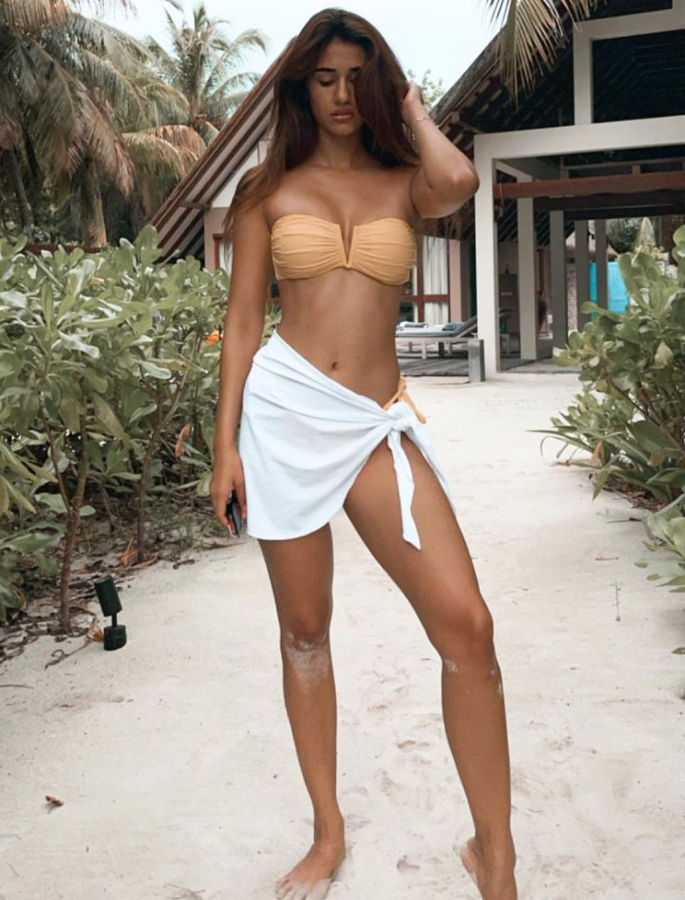 Naturally, fans were impressed with Disha’s beach look and were eager to make their thoughts and feelings known.

Many of the comments were filled with a mixture of fire and heart emojis.

Krishna Shroff, the sister of Disha’s rumoured boyfriend Tiger Shroff, was amazed by the picture and wrote: “Unreal.”

Needless to say, fans could not stop gushing over the picture.

Disha Patani actively posts pictures of her stunning looks on Instagram but she also shares glimpses of her fitness regimes.

She previously shared a video clip of herself in a pink long-sleeved crop top and black shorts undergoing intense weight training.

The video shows Disha lifting 70kg on her shoulders. She revealed that she usually does two sets and repeats them twice.

The video then shows the actress performing other workout methods, captioning the post:

“Some of my fav go to exercises.”

Not only were fans impressed but Tiger Shroff’s mother Ayesha Shroff and sister Krishna were also highly amazed.

On the work front, Disha Patani is getting ready for Radhe: Your Most Wanted Bhai, which is set to release on May 13, 2021.

Disha is currently filming Ek Villain Returns with John Abraham. It is scheduled for a 2022 release.

It also marks her reunion with Mohit Suri. The pair last worked together on the 2020 thriller Malang.

Dhiren is a journalism graduate with a passion for gaming, watching films and sports. He also enjoys cooking from time to time. His motto is to “Live life one day at a time.”
7 Smoking Hot Photos of Shanaya Kapoor
Pakistani Model Mathira slams Trolls who called her ‘Plastic’