Uorfi Javed posted a bold video of her racy outfit, this time going topless and ‘wearing’ just a pair of feathered wings.

Uorfi wore a wrap skirt which featured a risqué slit.

Uorfi Javed raised eyebrows on Instagram as she went topless in a video.

Although she was evicted after just a week on Bigg Boss OTT, Uorfi has since become one of the most well-known stars.

This is due to her bold, and often controversial outfits and her Instagram video is proof of that.

For her look, Uorfi decided to go topless, wearing a pair of blue feathered wings to cover her modesty.

Continuing with the blue theme, Uorfi wore a wrap skirt which featured a risqué slit.

The blue was contrasted with her white lace-up heels.

Uorfi completed her look with statement earrings and a high ponytail. Dark mascara added a sultry look to her ensemble. 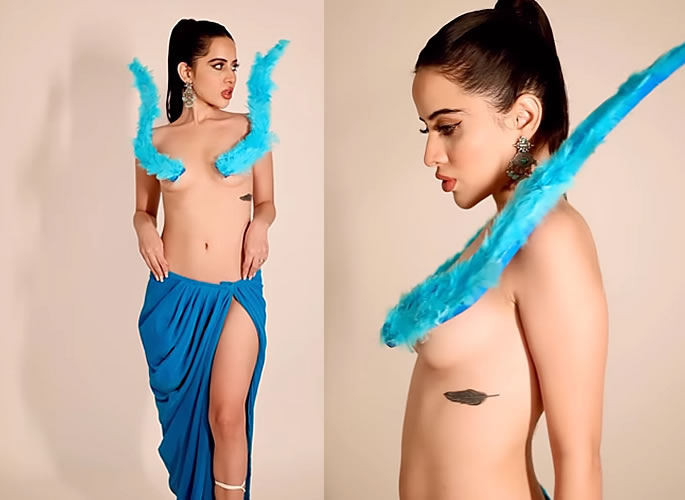 Her minimalistic outfit led to a mixed response.

Unsurprisingly, some criticised her for baring her body.

One said: “Madam this is not freedom, this is called sex appeal. We come from a culture where women are respected not from where you have to expose for some likes.”

Another said: “This is not a dress just a flash-spreading nudity.”

But others came to Uorfi’s defence, praising her courage.

One said: “Wow Uorfi, so creative and beautiful you are. Really proud of your guts.”

Another commented: “Every woman has the wings of freedom, only she needs to spread them and make her dreams come true, well done Uorfi sis.”

A third told her haters: “It’s her life and you all don’t have any f*****g right to say anything.

“She is doing this and it’s her life. If you are having such a problem then why are you all following and seeing her posts.”

Meanwhile, Uorfi Javed’s revealing outfits have led to a feud between her and BJP Maharashtra Mahila Morcha president Chitra Kishor Wagh, with the latter filing a police complaint against Uorfi for “exhibiting her body”.

In her complaint, Chitra wrote:

“No one could have imagined that the right to conduct, freedom of thought given by the Constitution would be manifested in such a subversive attitude.

“If she wants to display her body, she must do it behind the four walls, but the actor may not be aware that she is fuelling the perverse attitude of the society.”

Uorfi was summoned by Mumbai Police and reportedly told officials:

“I’m an independent person, I like to shoot and wear a certain dress. It’s not a crime in the constitution.

“When I step out for such shoots, paparazzi spot me, follow me, click the pictures and it goes viral. I don’t make it viral.”

Dhiren is a journalism graduate with a passion for gaming, watching films and sports. He also enjoys cooking from time to time. His motto is to “Live life one day at a time.”
Esha Gupta oozes Summer Vibes in Pastel Pink Dress
House of iKons London Fashion Week February 2023