A drugs gang which was run by two brothers and a friend have been jailed. During their operation, they forced a boy to deal the drugs.

"This gang targeted and exploited a young boy"

A three-person drugs gang from Rochdale were jailed for a total of 10 years and nine months at Manchester Minshull Street Crown Court on Friday, March 22, 2019, for running a drugs phone line.

One was known by the names ‘Woody’, ‘Tyson’ and ‘Rocky’. The other two were known as ‘Kez’ and ‘Doctor’.

It was heard that the three men forced a boy to deal the cocaine and heroin. They threatened the 15-year-old, making him sell the Class A drugs.

They told him he owed them money and the only way to pay it off was to be a drugs mule for them. The teenager was driven around in a car and forced to hand drugs to buyers.

The brothers and Rehman’s operation was uncovered by Operation Agenda, a Greater Manchester Police-led (GMP) investigation into drugs supply and modern slavery.

On April 5, 2018, officers watched Ratib and Rehman leave their house in a white Volkswagen Golf. They followed them to a supermarket car park and watched Ali hide a phone in the glove box as officers approached. 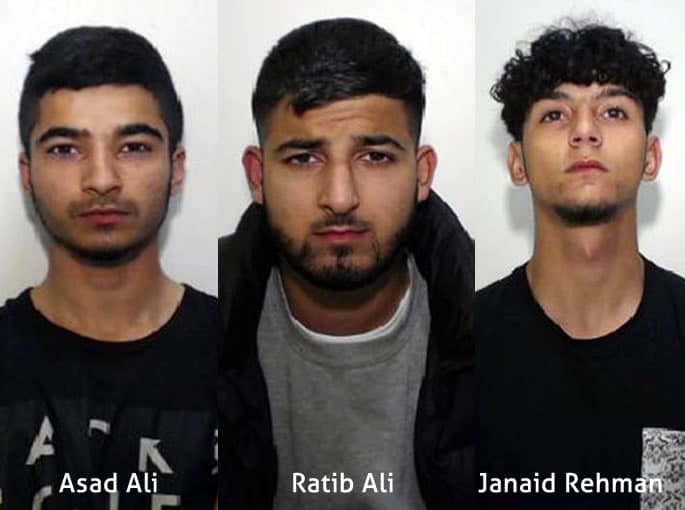 Rehman was searched and found to be carrying a knife. Number plates revealed that the car had been stolen. The men were arrested and four mobile phones were seized.

Examination of the phones revealed they were used to make and receive hundreds of calls every day to and from people buying drugs.

Police officers also found a large quantity of cash at their house.

Later in April 2018, investigators obtained intelligence suggesting a 15-year-old boy was dealing Class A drugs. However, enquiries revealed that the boy was being threatened to do so by the gang.

GMP Detective Chief Inspector Rick Hunt said: “This gang targeted and exploited a young boy, forcing him into a world of drug dealing and crime under threat of violence.

“He is now receiving help from specialist officers as he continues adjusting to a normal life away from the clutches of these despicable individuals.”

His brother Asad was sentenced to four years and nine months. He admitted conspiring to supply cocaine and heroin.

Janaid Rehman was jailed for two years after pleading guilty to conspiracy to supply cocaine.

“This was a large drugs conspiracy responsible for distributing a significant amount of Class A drugs.”

“But they were brought down thanks to the dedication and professionalism of our officers, who were able to utilise a broad range of surveillance and information gathering techniques to piece together this conspiracy.”

Dhiren is a journalism graduate with a passion for gaming, watching films and sports. He also enjoys cooking from time to time. His motto is to “Live life one day at a time.”
Ex-Boyfriend jailed for Abusive and Violent Behaviour
British Pakistani Woman arrested with £700k Heroin at Airport