Bollywood celebrities can nail every type of fashion style, especially when it comes to casual wear. We look at 10 of the top casual looks of the stars.

One particular casual look of Ranveer is one which is perfect of summer weather.

When it comes to men’s fashion in India, Bollywood actors are the inspiration for many people.

They can pull off almost any outfit for any occasion.

Because of their huge followings, whatever outfit is worn by a Bollywood actor will instantly trend.

Even casual looks are something which looks stylish.

Whenever a Bollywood actor such as Ranveer Singh is spotted out and about, he is likely to be sporting something casual.

This is due to the fact that casual clothing is comfortable but also versatile. It can be mixed and matched to suit a number of styles.

We explore a particular casual outfit choice of some of the top Bollywood actors. 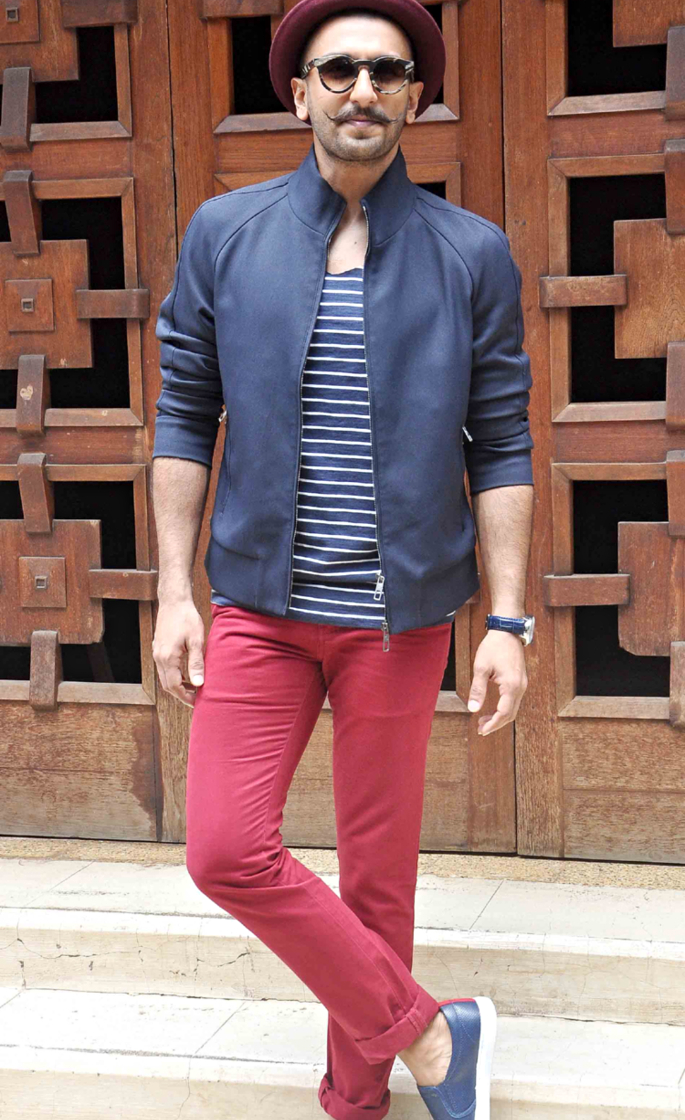 Ranveer Singh is undoubtedly becoming one of Bollywood’s biggest stars.

There is also no doubt that the Padmaavat actor is one of India’s flashiest dressers.

No matter the occasion, Ranveer’s fashion choices are bound to turn heads and even his casual attire is flamboyant whenever he has been spotted.

One particular casual look of Ranveer is one which is perfect of summer weather.

He mixes similar shades of blue with light coloured reds which make for an excellent casual look.

Ranveer wears a round neck striped top, which gives it that nautical look, along with light, fleece jacket.

The actor pairs it with a pair of red chinos, which are very popular among men during the summer and makes it his own by rolling up the legs slightly.

His casual attire is finished with his signature accessory, a hat. Ranveer wears a pink coloured one to contrast with the rest of his outfit.

For the summer look, he wears blue slip-on pumps and a pair of oak and white coloured oversized sunglasses.

The combination of red and blue is the perfect contrast in colours which make for an ideal outfit for casual wear.

As is the fashionista Ranveer is, he certainly makes a statement no matter what fashion style he goes for. 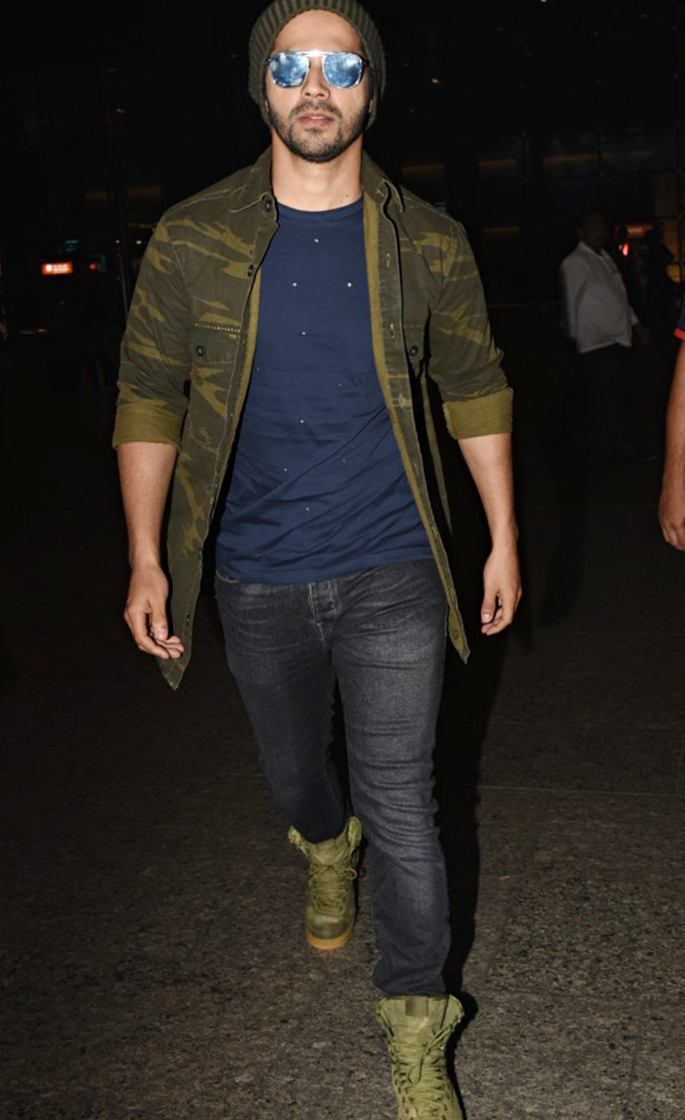 Varun Dhawan is an actor who is stylish when goes for formalwear and when he opts for a casual look.

Varun’s outfit pairs together a blue top with a pair of dark blue jeans, which in itself is a perfect outfit for casual wear.

Varun takes it one step further to enhance the outfit’s look by adding khaki green to offset the blues.

He sports a camouflage design shirt over his blue top for added effect to make him stand out.

The high-top trainers are also a similar colour to his shirt for the added contrast to Varun’s outfit, adding more style to his overall look.

The casual outfit is finished with a dark green beanie and a pair of mirrored aviators.

It is the ideal outfit combination which can be worn anywhere as it brings a sophisticated edge to it. 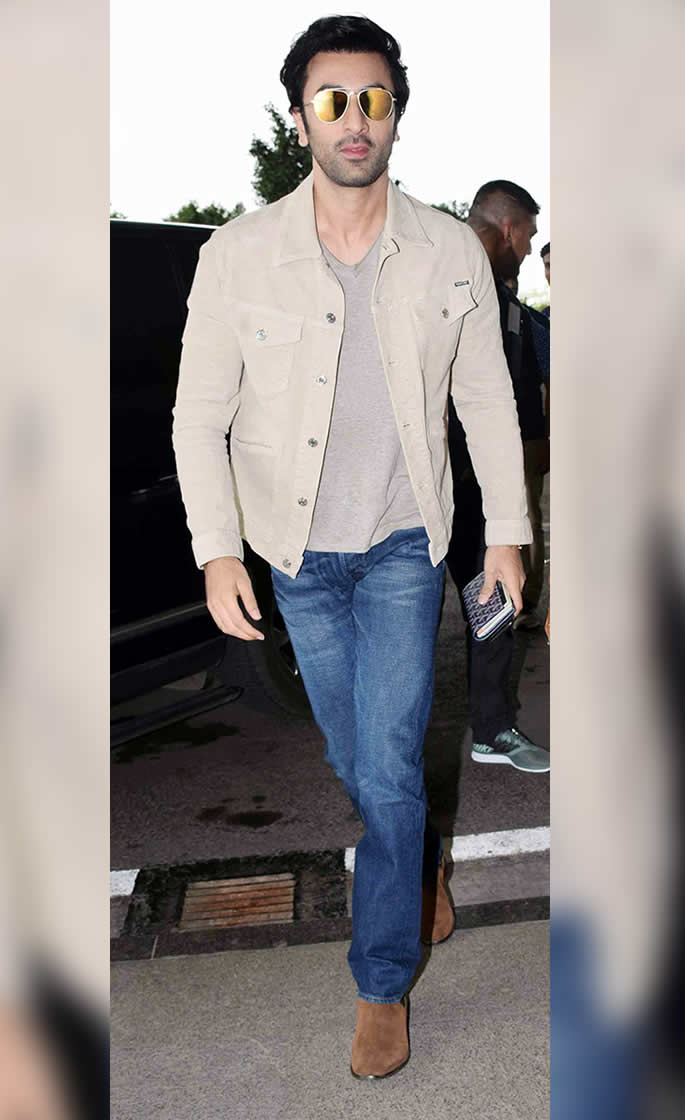 Ranbir Kapoor is one of Bollywood’s most stylish actors and is regularly seen sporting various fashion pieces.

The actor is a big fan of fashion and boasts a huge collection of expensive trainers.

Ranbir’s casual looks are a combination of relaxation and making a statement, as he does here.

His contrast of colours makes for an elegant appearance.

The actor sports a stone coloured denim jacket with a pair of blue jeans.

Wearing two denim items is a risky move but if done correctly, like Ranbir does wearing two different colours, it is a good casual style.

His similar coloured T-shirt just adds to his overall look. Ranbir finishes his outfit with smart brown suede shoes and a pair of yellow mirror-style aviators.

It is a sophisticated casual look to go for which is suitable for any day of the week. 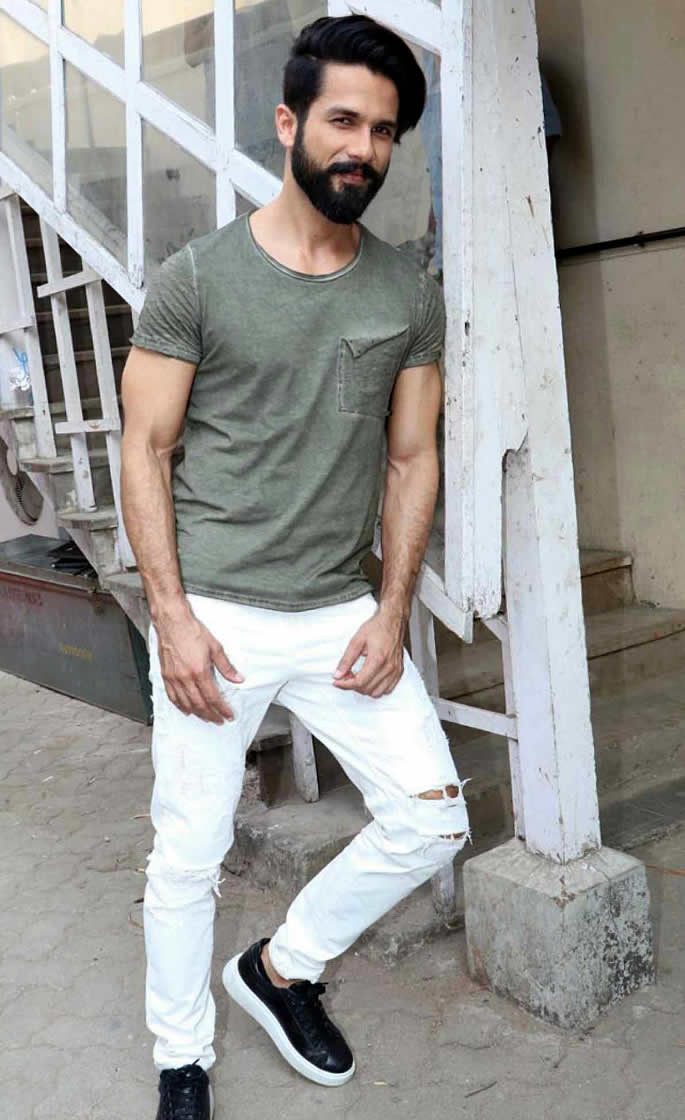 Shahid Kapoor is one of Bollywood’s most renowned actors and has appeared in hits such as Jab We Met (2007).

He is known for his facial hair, which is changing all the time.

Shahid is also recognised as one of Bollywood’s most fashionable stars.

This casual look exemplifies that as he wears a bold take on the T-shirt and jeans combination.

He has a simple khaki green crew neck top which has a slightly folded pocket, which is a nice touch.

His jeans are the most daring part of the outfit. Many people would not be able to pull off a pair of white jeans but Shahid manages it.

The jeans feature a ripped design for that edgy approach to casual wear.

Shahid finishes the outfit with a pair of black leather trainers which contrast the rest of the lighter coloured outfit. 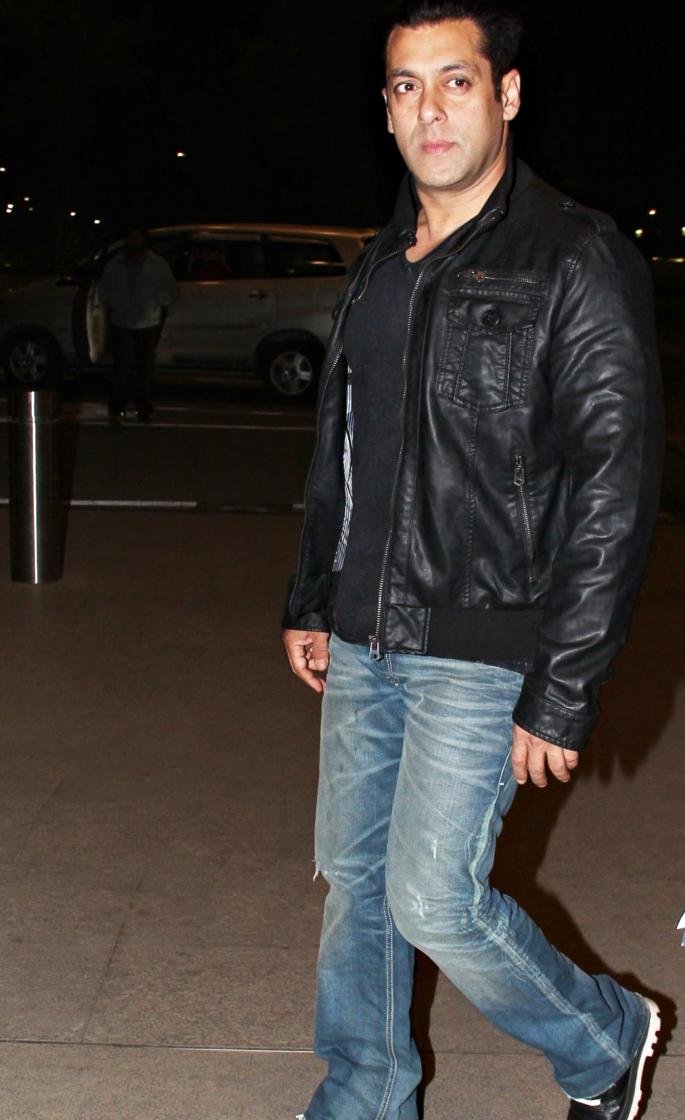 Salman Khan is one of Bollywood’s most prolific actors and is regularly spotted in casual attire.

The majority of his outfit combinations are similar to each other with some small variations.

This outfit, in particular, is another take on casual wear.

Salman is wearing a dark plain T-shirt with blue bootcut jeans. As a pairing, it makes for a standard casual look.

The Bollywood actor adds a smart leather jacket to his outfit which elevates it to another level as the jacket is very versatile.

It can be worn casually as well as for smart occasions.

Salman’s jacket is potentially unique as there is a slight reveal of the inside lining which is a mix of blue stripes. 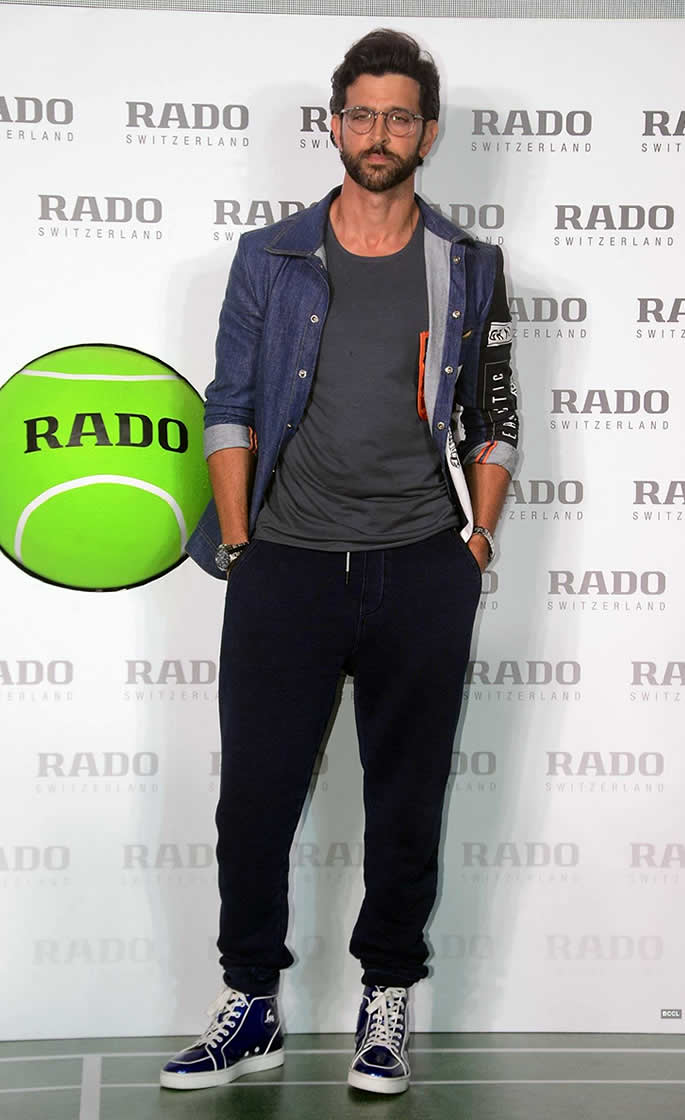 When it comes to an ideal casual outfit, simplicity and comfort are the two main factors and Hrithik Roshan showcases that.

The fitness fanatic likes to add a sporting element to his outfits and this casual appearance is no exception.

He combines a standout denim shirt with a pair of baggy, cuffed joggers.

The two colours contrast each other very well in this fashion choice.

It is a unique combination which may not suit many people but is a good look for Hrithik.

His footwear is the main element of his whole outfit, which will make anyone stand out from the crowd.

The smart high-tops mix royal blue with gleaming white accents. They are good for wearing for sports and for going out, as Hrithik does here.

It is a perfect outfit to wear for when you just want to chill. 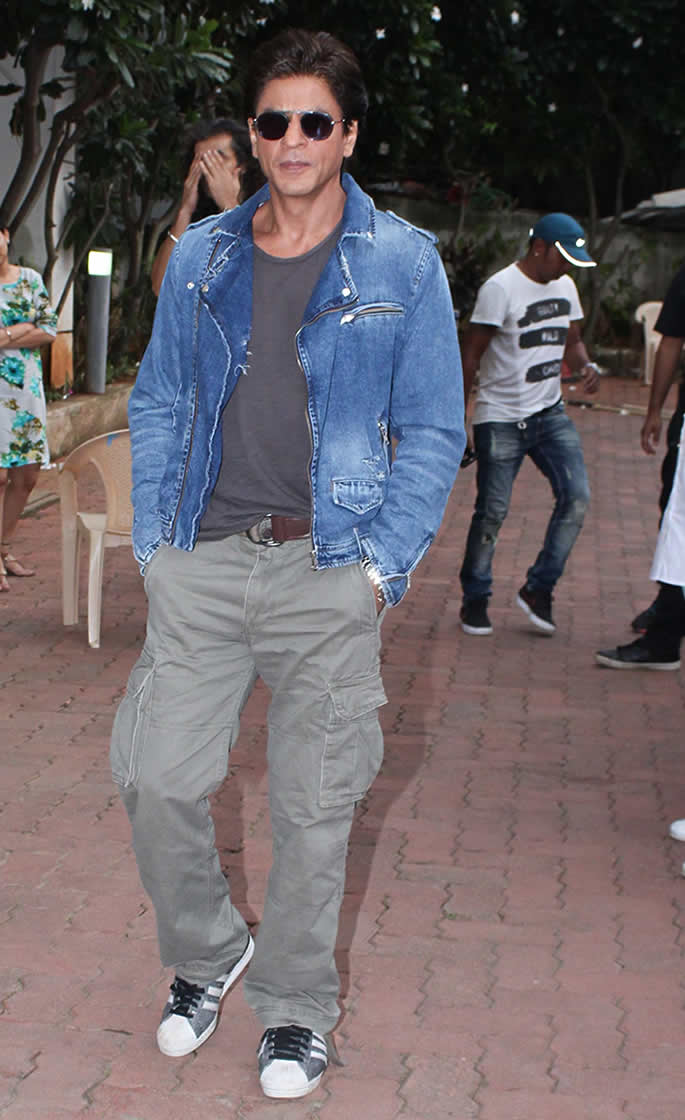 Shahrukh Khan is one of Bollywood’s most iconic stars and is also one of the most elegant.

He is regularly spotted wearing luxurious suits on the red carpet but he is also one to rock casual clothing.

The actor goes for an old school look when it comes to casual attire as wears a pair of baggy cargo trousers with a denim jacket.

Shahrukh’s jacket is inspired by designs commonly used for leather jackets, this version is just as stylish but a bit more exclusive.

His khaki coloured trousers are one which is not commonly rocked but Shahrukh manages to bring them to the modern day.

The actor sports a pair of grey and white Adidas with black round aviators to complete his casual look. 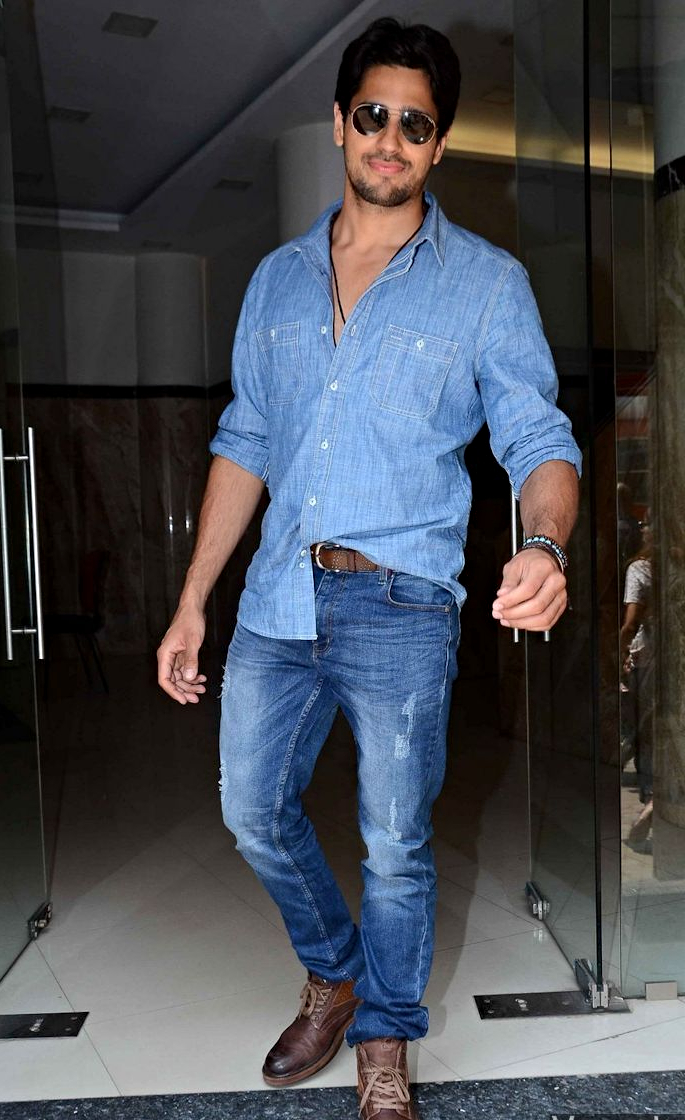 Sidharth Malhotra is one of Bollywood’s most fashionable actors since he used to be a model before venturing into acting.

The actor’s casual attires usually add an element of elegance such as a blazer or accessorised with unique trainers as he is a massive sneakerhead.

Sidharth’s clothing choice displayed is one which can go horribly wrong which is why many people stay clear of it.

Usually, double denim is something which either has to be right otherwise it should be avoided.

Sidharth does it right by wearing two shades of blue denim.

The light blue shirt is perfect alongside the darker jeans which have a slight ripped effect.

He wears a pair of brown boots to add more depth to his whole outfit.

It is a look which will get people turning their heads especially as it is done right. 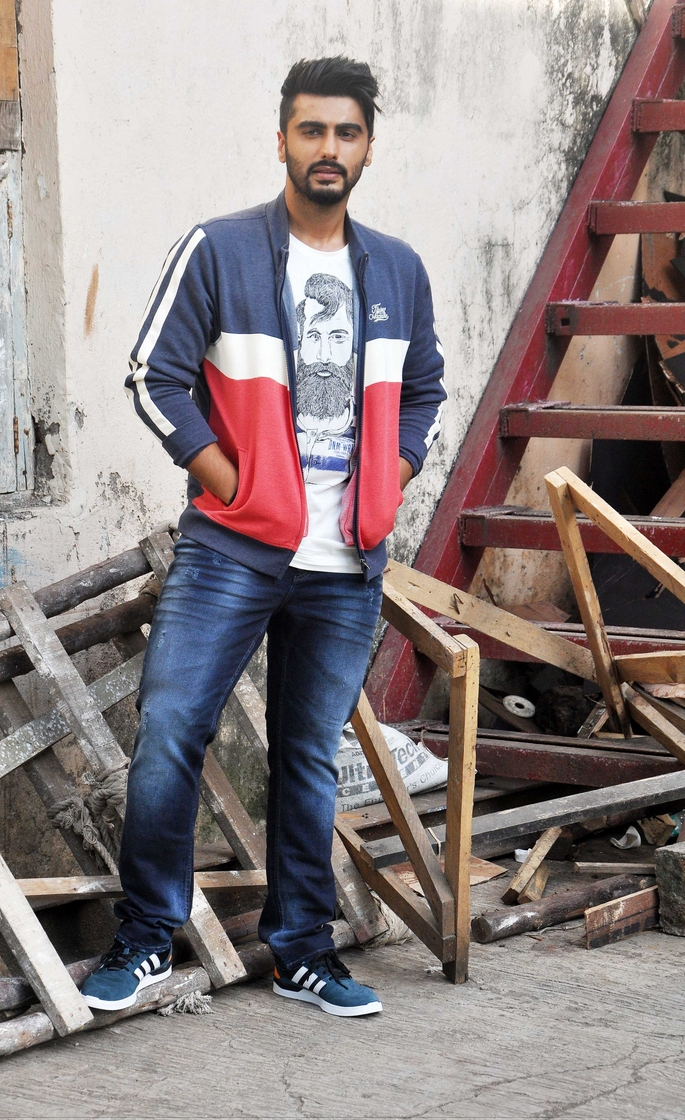 Like Hrithik, Arjun Kapoor is another actor who likes to incorporate sportswear into his casual outfits and this attire does it perfectly.

Arjun wears a coloured full-zip track jacket over a white printed T-shirt which is a stunning combination.

The jacket’s colour design is bold, putting a modern twist on the jacket.

He pairs it with some smart blue jeans for an outfit which would be suitable anywhere. 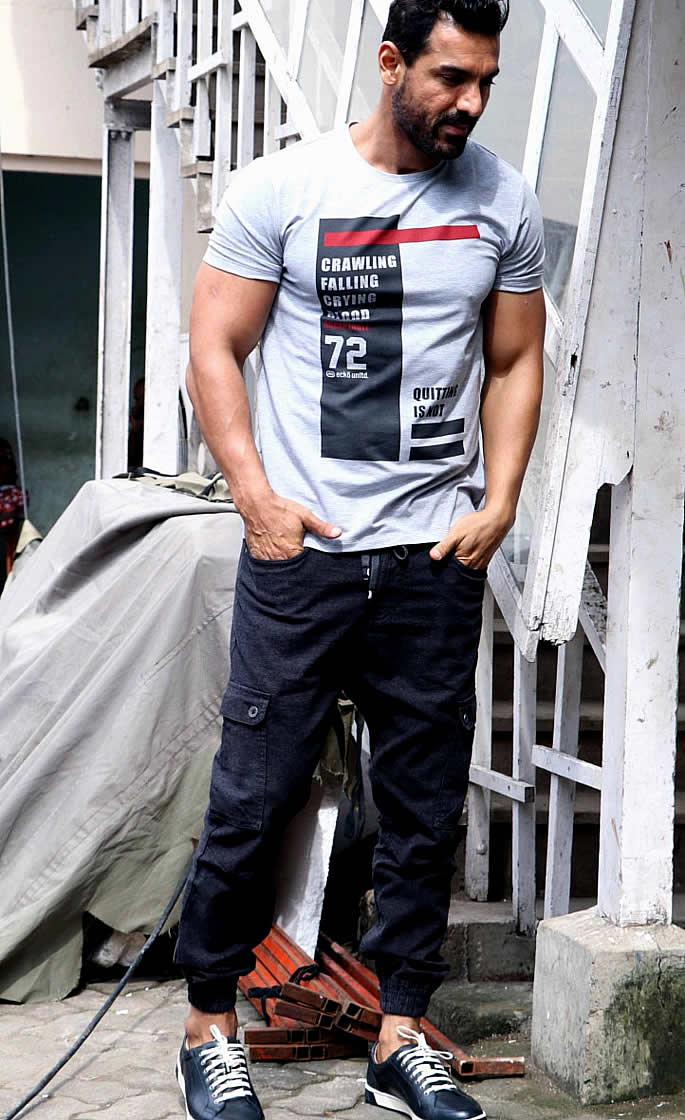 John Abraham is rarely seen in anything other than casual attire and this outfit is a prime example of his fashion style.

He wears a light grey T-shirt detailed with inspirational phrases and abstract patterns.

John pairs it with smart dark grey joggers which are cuffed.

The almost denim look of them makes them smarter than a regular pair for that relaxed look, yet sophisticated look.

It is a blend of greys which work well together as makes each item individual to one another.

An outfit like this may be one that people avoid as it is a bold combination, but John manages to pull off the style.

His casual attire is finished with a pair of simple trainers. They can go with anything and these go perfectly with this outfit.

The smart look to makes them suitable for casual and smart wear.

John makes the outfit unique and perfect for warm weather by wearing no socks.

It is a brave look, but one which looks good when done correctly and this a perfect example by the Bollywood actor.

These Bollywood actors are stylish when it comes to formal events, but they are also stylish in everyday life.

Their casual outfit choices highlight that casual wear is broader than just a T-shirt and jeans.

Even with a T-shirt and jeans, these celebrities put their own spin on it to enhance the classic but basic look.

These outfits are just an example of how casual wear can be extremely fashionable., whether you are a Bollywood star or not!

Dhiren is a journalism graduate with a passion for gaming, watching films and sports. He also enjoys cooking from time to time. His motto is to “Live life one day at a time.”
Bangladesh Garment Factories: Any Progression since Rana Plaza?
10 Best and Glamorous Looks of Faryal Makhdoom