Three Men convicted for Drug Feud Shooting at a Home

Three men have been convicted for their roles in a drug feud which resulted in shots being fired at a home in East Lancashire.

Three men are set to face long jail terms after they were found guilty of being responsible for shots fired at a home. It was due to a drug feud.

The crown court heard that the drug feud also led to a second house being shot at.

Shabir Begum, an innocent mother, was injured by flying glass after 27-year-old Kassam Nadeem fired a sawn-off shotgun at a home in Accrington in June 2017.

The jury heard that the intended target was Waheed Hussain, who was said to have owed a drugs debt.

A month earlier, Nadeem had also fired at a house in Haslingden, Lancashire with a shotgun.

Another man, Hafizur Rahman also owed a drug debt to Hasriat Khan, aged 32. However, Khan botched the shooting and instead targeted his brother Sadiqur’s home next door.

The court heard that Mr Rahman received a threatening phone call from one of Khan’s friends, Louis Ojapah, prior to the shooting.

Prosecutor Keith Sutton explained to the court that a day after the Accrington shooting, Nadeem was travelling in a BMW along the M6 going south.

A police patrol car intervened and urged the driver to pull over at the next exit. 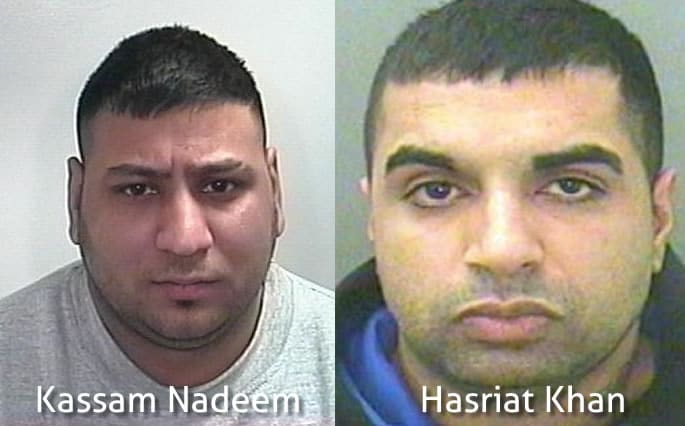 Mr Sutton said that the BMW went back on the motorway and drove off. Police later caught up with the car, where Nadeem was a passenger.

A member of the public informed the officers that he had seen an object being thrown out of a vehicle at junction 19.

Police officers returned to the junction where they recovered a shotgun.

Kassam Nadeem, of no fixed address, was found guilty of two charges of conspiracy to possess a firearm with intent to cause violence and one charge of possession of a sawn-off shotgun.

Hasriat Khan, of Ramsbottom, Bury, was found guilty in his absence of involvement in the Haslingden shooting.

Louis Ojapah, aged 26, of Liverpool, was convicted on the same charge.

Umar Hamid, aged 27, of no fixed address, was found not guilty of involvement in both incidents.

Amer Hussain, aged 27, of Accrington, was found not guilty over the Accrington incident on April 1, 2019.

Judge Heather Lloyd remanded Nadeem, Khan and Ojapah in custody. They will be sentenced on May 30, 2019.

Dhiren is a journalism graduate with a passion for gaming, watching films and sports. He also enjoys cooking from time to time. His motto is to “Live life one day at a time.”
Married Man with £600 in Park offered Schoolgirls Money for Sex
Hassan Waseem drove Wrong Way on M56 missing Police Car