The Question of Racism in Desi Households

Do internalised racism and an anti-black stigma run deep within the South Asian community? We explore this important question to find out more.

In most Desi households, racism is not a foreign subject.

Whilst South Asians receive their fair share of discrimination, this hasn’t prevented some Desi households from holding prejudiced thoughts.

This includes thoughts and views towards other communities, faiths, castes, and ethnic minority groups behind closed doors.

The South Asian community is not entirely innocent.

In regards to race relations, remaining silent and not acknowledging racism towards others achieves nothing.

We explore the question of racism within Desi households, the types and its impact. 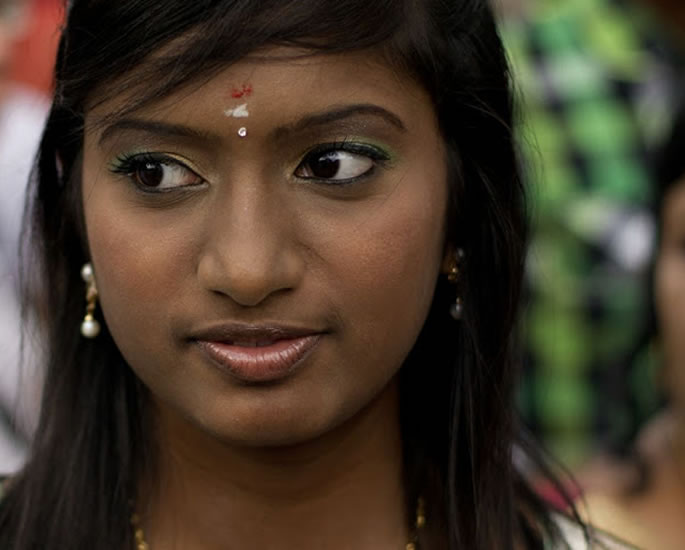 One of the main issues within the South Asian community stems from internalised racism.

How often have you heard that Desi aunty comment ‘she is a little on the dark side’ to a newborn child or ‘his wife is darker than the husband’ and so on?

Ethnic minorities have all too often been exposed to racist messages throughout their entire lives. As a result of this, they may grow to agree with these views and develop hatred towards their own racial group or sub-groups.

Due to internalised racism, one may begin to develop self-hatred towards their physical appearance.

This issue can resonate with many South Asians. For example, the beauty ideal of having fairer skin has dominated the Asian beauty market for many years.

When the British colonised South Asian countries, they manufactured the ideology that fair skin equates to superiority.

In order to keep up with western beauty standards, many South Asians choose to resort to skin lightening creams in an attempt to alter their skin colour.

The endorsement of skin lightening creams by major Bollywood stars also contributes towards colourism in the South Asian community.

India has a multitude of people with different colours of brown skin from the darkest to lighter brown, but it does not make them less Indian or a human.

Caste conflicts and discrimination are also issues amongst South Asian communities. Often, darker skin tones are associated with those of lower castes.

The caste that an individual is born into can determine their life in the future, including their career, their societal role, and how they are treated by others.

DESIblitz exclusively chats to two South Asians about their experience with this subject.

“I purposely try to limit contact with certain members of my family because of racist things they have said in the past.”

“It can be a tricky situation but I believe the conversation is worth having.”

“Calling out relatives on their casual racist remarks has led to arguments and tension within my family. They need to be held accountable for their comments.”

To expand views and become more knowledgeable in relation to the topic of race, it’s important to engage in conversations at home with the family and the broader community.

Educating ourselves is the very least we can do to become better allies.

“I’ve seen the negative effects that the caste system has created; marriage proposals being laughed at, a lack of job opportunities and generally a lower sense of living.”

“The whole notion of only being allowed to marry someone of the same caste is honestly absurd to me.”

Whilst the backlash against inter-caste marriages is easing, many individuals do still face abuse and discrimination as a result of it.

But the issue of internalised racism and discrimination against darker skin tones is one that needs attention within South Asian communities.

The celebration and acceptance of darker skin tones is a simple way to eliminate racism in Desi households but for it to be a reality is the challenge. 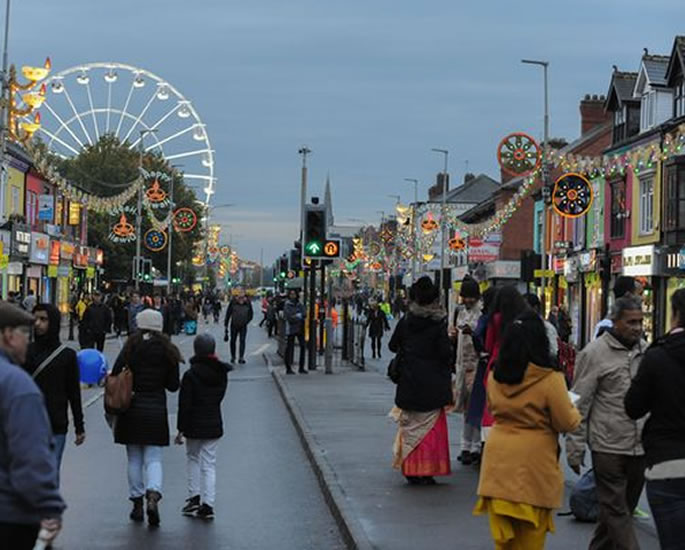 For many Desi households, a lack of integration with other castes, faiths, and communities has become the norm.

The practice of staying within your ‘own clan’ and type is very common when it comes to grouping South Asians living in the UK.

There are many areas and cities in the UK which have concentrations of South Asians who are from specific backgrounds like Leicester, Birmingham, Southall, Blackburn, Bradford and Leeds.

Interracial or mixed-race couples are not common amongst South Asian communities.

This could be due to many Desi households having the mentality that living in a ‘bubble’ seems to be the safer option, as well as prejudice and racism.

Having been in an interracial relationship for 2 years, Bally Atwal shares his views:

“Dating wasn’t discussed much when I was growing up, but it was established that I could start dating once I was at university.”

“Once I was there, I was very much looking forward to meeting new people and forming new relationships.”

“Throughout my 2nd and 3rd year, I dated a white woman and it was going well until both of our families got involved. The mere thought of their son being part of an interracial couple was absurd to my parents.”

Fear of the unknown may prohibit integration between racial groups.

“Despite changing demographics in the UK, where one in every 10 couples identifies as intercultural, intercultural couples still experience considerable racism.”

Whilst interracial relationships may survive the initial dating process, interracial marriages are still seen as a taboo amongst the South Asian community.

Limiting exposure to other racial groups and communities reinforces the prejudicial views of the earlier generation South Asians in the UK. 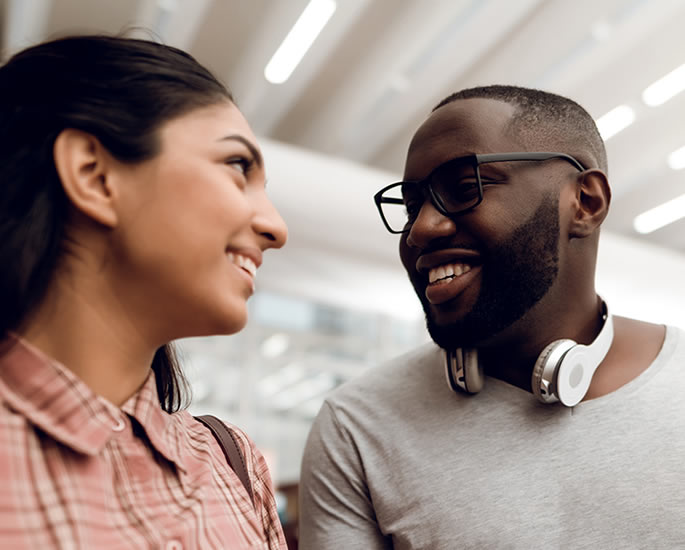 Caste-based hierarchies and colourism have also led to prejudice toward black people.

It could be said that the anti-black rhetoric was instigated by colonialism. Rejecting blackness meant that non-black people of colour (POC) realised that close proximity to whiteness could aid their own survival.

In the same way, colonialism has negatively impacted many Desi households, the black community has been affected by the oppression that continues to this day.

Slavery has become a very sad part of black history which was enforced by white supremacists.

Ironically, the stigma of ‘blackness’ still exists within Desi households as well.

Anti-black racism is almost embedded in South Asian communities as a result of caste and skin colour discrimination.

It is frequently witnessed in matchmaking scenarios for South Asians when it comes to marriage. If the prospective groom or bride are dark in skin colour it is seen as a negative attribute, irrespective of the personality of the person.

Adverts in some matchmaking websites still request the bride to be ‘fair in complexion’.

Even racism towards other faiths is often heard of where people of a darker colour skin are stigmatised for following a lower caste-led faith.

In a country like the UK, where skin colour is a somewhat controversial matter, anti-black racism is all too common and casual.

As a result of external prejudice, many South Asians choose to believe stereotypes associated with other groups and cultures.

Black people not originating from South Asia are often tagged with stereotypical profiles. Feeling intimidated and uncomfortable around black people and using racial slurs are both examples of interpersonal symptoms of anti-blackness.

These stereotypical views are also caused by a lack of integration with other communities.

New generations of South Asians are key in eliminating such prejudice which has been put in place by older generations.

Use of words like ‘kala’ and ‘kali’ (black person), ‘gora’ and gori’ (white person), when used in a derogative and negative manner in Desi households is a blatant form of racism which needs to end.

However, contextually, some would argue that these words may be the common way to describe an individual’s identity.

When racial discrimination occurs in Desi households, as it does in other community households in the opposite way; it is no different and therefore, shows no or little progress in changing attitudes.

As a community, South Asians can help make a change to stand with black people in a variety of ways.

The most important step is to confront casual racism and colourism. This can be achieved peacefully.

Having an effective conversation with family, taking the time to first educate yourself about systematic racism, privilege, and oppression, call all go a long way.

“The injustices faced by the black community are on a much higher level compared to the injustices felt by other ethnic minority groups.”

“Our experiences with racism and discrimination as South Asians don’t need to be brought up in every race conversation; we can’t relate to every situation either.”

“As a community, we need to learn to take a step back sometimes and understand that racism doesn’t affect us solely.”

Older generations are not to be excused for casual derogatory racist remarks. On the path to educating yourself, educating family members is an important step. Do not be complicit.

The conversation will most likely be uncomfortable for many South Asian communities as it is not a topic that is openly discussed.

Whilst the majority of young South Asians in the UK today are open to change and a more accepting role in society, the older generations may still need convincing to take a step forward. Some will even resist such re-thinking.

It is fair to say while the South Asian community also faces discrimination, it is still privileged to a large degree, due to the hard work and efforts put in by the elders who set-up Britain as their home after migrating here.

Therefore, Desi households should use their privilege to educate as many people as they can.

Our experiences and feelings are valid. However, we have to support all communities regardless of how much support is returned.

Racism is unfortunately not a thing of the past yet, and it won’t end until the conversation starts.

As a community, Desi people living in the UK need to challenge themselves by continuing these conversations in their households.

Everyone has the power to help eliminate prejudice and racism in Desi communities but change can only take place with a desire and determination to make it really happen no matter at what level.

Ravinder is a Journalism BA graduate. She has a strong passion for all things fashion, beauty, and lifestyle. She also likes to watch films, read books and travel.
Sabah Kaiser shares Her Experience of Child Sexual Abuse
The Stigma of Being Divorced & an Indian Woman